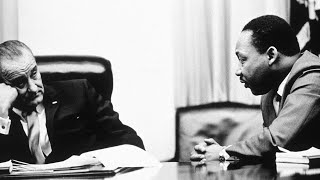 Every four years, we add an extra day to our calendars to make up for the fact that they don't accurately reflect the movement of the planet. The Kerner Commission report was released on just such a day, 50 years ago.

Unfortunately, too little has changed since February 29, 1968. We're still out of alignment with the reality all around us.

This report, officially called the "Report of the National Advisory Commission on Civil Disorders," was commissioned by President Johnson to investigate the causes of the riots that rocked Detroit and other U.S. cities in the summer of 1967. The report identified the forces behind these riots with uncanny precision.

Racism, economic inequality, police violence, and media bias: these were the instrumentalities of oppression the commissioners found 50 years ago. They are still with us today.

The fact that the Kerner report still rings so true is its greatest accomplishment -- and our greatest failure.

President Lyndon Johnson was under pressure to do something after rioting broke out in inner cities across the United States. So, he did what politicians often do when they're under pressure: He appointed a "bipartisan commission." That usually creates the illusion that something is being done, while ensuring that whatever the commission eventually recommends will be bland enough to provide cover for whatever the politician wanted to do in the first place.

This time, the commissioners took their work seriously. Former senator Fred Harris is the only surviving member of the original commission, which included Republicans and Democrats, a labor leader and a business executives... and only two black members.

Activists and radicals were not welcomed. As historian Stephen M. Gillon noted, "Johnson assumed that his mainstream commission would produce a mainstream report that would endorse the broad outlines of his existing domestic agenda and insulate him from attacks both from the right and from the left."

The Kerner report instead drew bold conclusions and proposed equally bold solutions. One sentence from the report became famous:

"This is our basic conclusion: Our nation is moving toward two societies, one black, one white -- separate and unequal."

The report then said: "To pursue our present course will involve the continuing polarization of the American community and, ultimately, the destruction of basic democratic values."

To create "common opportunities for all within a single society," the report called for...

"...a commitment to national action -- compassionate, massive and sustained, backed by the resources of the most powerful and the richest nation on this earth. From every American it will require new attitudes, new understanding, and, above all, new will." (Emphasis ours.)

The report called for an end to "violence and destruction" -- not only "in the streets of the ghetto," but "in the lives of the people." The term "structural violence" had not yet entered the American lexicon, but the report offered a litany of the harms it causes. It also emphasized the different realities experienced by white and black America, calling the ghetto "a destructive environment totally unknown to most white Americans."

Related Topic(s): Inequality; Kerner Report; Media; Police; Racism, Add Tags
Add to My Group(s)
Go To Commenting
The views expressed herein are the sole responsibility of the author and do not necessarily reflect those of this website or its editors.