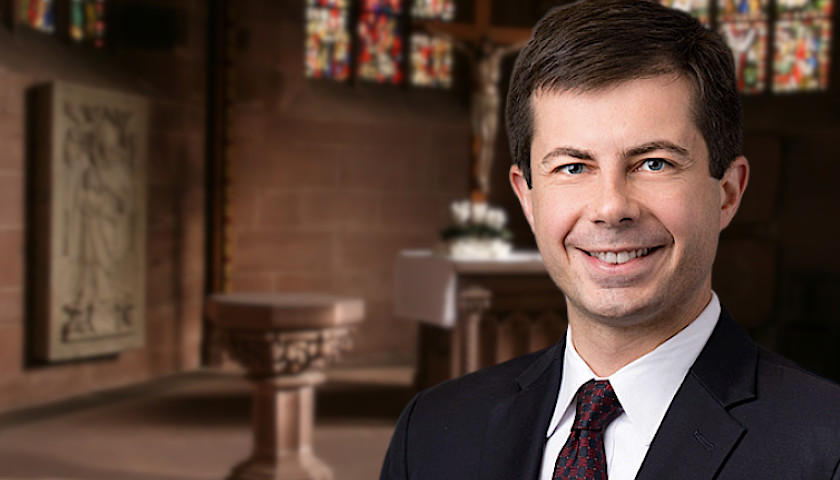 Pete Buttigieg is gay and a Christian, in spite of the Bible claiming God commanded gay men be put to death.
(Image by tennesseestar.com)   Details   DMCA

In the US, Democrat politicians like Pete Buttigieg*, who wants to be elected president in 2020, often attempt to appeal to Christians. After all, it was the Christians of the religious right who were essential in putting Donald Trump in the White House.

In order to appeal to Christians, these Democrats focus on the quotes from the Bible that paint Jesus as a peace and love hippie type of activist. Since the Bible is infamously ambiguous, they have a lot of material that backs up that image of Jesus. HOWEVER, being ambiguous, the Bible also has a lot of material that contradicts that peace loving image of Jesus. This material, which shows Jesus as believing the ungodly and cruel Hebrew Bible/Old Testament is the Word of God and that its religious violence promoting commands must be followed, is completely ignored by Buttigieg and similar Democrats of the religious left. (The revolutionary and Deist, Thomas Paine, made clear the Bible's ambiguity in a letter to a friend who was critical of Paine's book on God, Deism and religion, The Age of Reason. Paine wrote, "In your letter of the twentieth of March, you give me several quotations from the Bible, which you call the Word of God, to show me that my opinions on religion are wrong, and I could give you as many, from the same book to show that yours are not right; consequently, then, the Bible decides nothing, because it decides any way, and every way, one chooses to make it.")

One of the examples of Jesus' profound cruelty, as well as of Jesus' twisted beliefs about The Supreme Intelligence/God, is found in Matthew 13:10-14 which states: "And the disciples came, and said unto him, Why speakest thou unto them in parables? He answered and said unto them, Because it is given unto you to know the mysteries of the kingdom of heaven, but to them it is not given. For whosoever hath, to him shall be given, and he shall have more abundance: but whosoever hath not, from him shall be taken away even that he hath. Therefore speak I to them in parables: because they seeing see not; and hearing they hear not, neither do they understand. And in them is fulfilled the prophecy of Esaias, which saith, By hearing ye shall hear, and shall not understand; and seeing ye shall see, and shall not perceive."

Based on these words the anonymous author of the Gospel of Matthew attributes to Jesus, Jesus intentionally spoke to great multitudes of people, as the listeners to Jesus are described in verse two, in parables to make sure they did not understand what he was saying. This. in and of itself, shows Jesus to be heartless and cruel, just as his Word of God, the Hebrew Bible, depicts God to be. By Jesus not explaining things to the multitudes in a way they could understand, he, IF you believe the nonsense of Jesus being the son of God and savior for all of mankind, was preventing them from being saved and ensuring their eternal torture and torment in hell.

His statement that his disciples have been allowed "to know the mysteries of the kingdom of heaven" but the multitudes of his listeners have not been allowed to know, can only portray God as a cruel and evil entity hell-bent on seeing to it that the vast majority of people will burn in hell for eternity. This teaching also is predestination, as Calvin preached. (It is important for Deists and all freethinkers to know that the Christian Bible is ambiguous about Christianity's biggest selling point, eternal salvation, as this page makes evident. With this knowledge, Deists can let Christians know about this fact. This will cause many of them to start applying their innate God-given reason to the Bible and Christianity. And as Christian evangelist Billy Graham admitted, there is no reason that is in agreement with our innate gift from God of reason to believe the Bible is the Word of God.)

Jesus' reference to the Jewish prophet Esaias (Greek for Isaiah) shows the value Jesus put on the repulsive and ungodly Jewish prophets of the Hebrew Bible. Here are some examples of God being portrayed as a violent and cruel dictator from Isaiah. Jesus was in complete agreement with portraying The Supreme Intelligence/God in this disgusting way.

Jesus's acceptance of Isaiah as being part of God's Word, lets us know that Jesus backed the Israel over all the world idea promoted by Isaiah 60:12 which claims God said regarding the Jewish state of Israel, "For the nation and kingdom that will not serve thee shall perish; yea, those nations shall be utterly wasted." To destroy and "waste" nations involves the killing of millions of people. Jesus was fine with that.

The statement by Jesus, "For whosoever hath, to him shall be given, and he shall have more abundance: but whosoever hath not, from him shall be taken away even that he hath", sounds like it could have been written by Ayn Rand. And, in actuality, it is worse than what Rand believed, because Rand only concerned herself with the here and now, not the hereafter. With Rand, the suffering of the people in need would end when their lives ended. With Jesus it continues for eternity with an afterlife in hell.

Pete Buttigieg and the other Democrat politicians are not interested in moving society and civilization forward, they're only interested in winning votes. If they were really interested in making America a better country, and the world a better place, they would use their innate God-given reason and their copious amounts of resources to warn people about the harmful ideas promoted in the Bible and in the Quran, and about how the religious right, through its use of the Republican Party, are destroying the secular America created by America's Founders. They would educate people to the fact that many of America's key Founders were not Christians, but were Deists. This would click with the vast majority of "nones" who hold Deistic beliefs about The Supreme Intelligence/God. In a relatively short period of time Deism would become a household word, and the man-made "revealed" religions would lose many of their supporting members. Without their supporting members, the "revealed" religions would be rendered harmless.

Since politicians won't do what needs to be done, Deists and all freethinkers must do it. To the very best of our ability, we need to work to educate as many people as possible to the fact that the Bible is NOT the word of God and that God gave us reason, not religion. As Thomas Paine pointed out in The Age of Reason, The Complete Edition, we need to let people know that the Bible does not promote God given reason, it promotes the opposite, nonsense. Paine wrote: "Nonsense ought to be treated as nonsense, wherever it be found; and had this been done in the rational manner it ought to be done, instead of intimating and mincing the matter, as has been too much the case, the nonsense and false doctrine of the Bible, with all the aid that priestcraft can give, could never have stood their ground against the divine reason that God has given to man."

A primary reason our gift from The Supreme Intelligence/God of innate reason was given to us is to enable us to protect ourselves from all bad ideas, including those found in the Bible and other "holy" books written by men. What we DO with our profoundly beautiful and important gift is completely up to us.


*(Pete Buttigieg is a gay man and a Christian. How he, or any gay person or anyone who does not hate gay people, can delude themselves to the point of belonging to any Bible believing religion that commands the killing of gay men, as the Bible does at Leviticus 20:13, is impossible to understand. Surely we can, and must, do much better than this!)

Bob Johnson is a paralegal and a freelance writer in Florida. He was raised Roman Catholic, but after reading Thomas Paine's The Age of Reason, he became a Deist. In 1993 he founded the World Union of Deists and in 1996 he launched the first web (more...)
Related Topic(s): America; Bible; Christianity; Deism; Democrat; Freethinker; God; Jesus; Left Wing; Other; (more...) Peace; People; People; Politicians; Religion; Religious Freedom; Religious Hypocrisy; Religious Left, Add Tags  (less...)
Add to My Group(s)
Go To Commenting
The views expressed herein are the sole responsibility of the author and do not necessarily reflect those of this website or its editors.