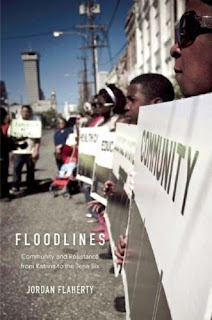 --An interview with Jordan Flaherty

Jordan Flaherty is a journalist, an editor of Left Turn Magazine, and a staffer with the Louisiana Justice Institute. He was the first writer to bring the story of the Jena Six to a national audience and audiences around the world have seen the television reports he's produced for Al-Jazeera, TeleSur, GritTV, and Democracy Now.

Over 40 years ago in Louisiana, 3 young black men were silenced for trying to expose continued segregation, systematic corruption, and horrific abuse in the biggest prison in the US, an 18,000-acre former slave plantation called Angola. In 1972 and (more...)
Related Topic(s): FEMA; Families; Jena Six; Jena Six 6; Justice; Police; Prisoners; Repression; Resistance; Revolution; (more...) Revolution; Rights; School; Torture; Uprisings; Withdrawal_From_Iraq, Add Tags  (less...)
Add to My Group(s)
Go To Commenting
The views expressed herein are the sole responsibility of the author and do not necessarily reflect those of this website or its editors.