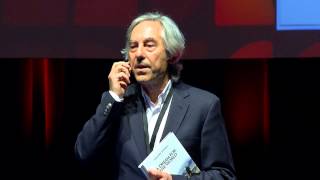 The birth of the individual - a dream for the world: Stefano D'Anna
(Image by YouTube, Channel: TEDx Talks)   Details   DMCA
>

The State, as now constituted, pretends it favors giving away the farm for nothing "to those in need." What they really mean is: they steal the farm, and then they give a few pieces away on their terms.

There are people who don't understand what a FREE INDIVIDUAL is. They want a world of Central Planning. They feel a welter of emotions, all negative, when they contemplate THE FREE INDIVIDUAL.

For the free individual, "the highest work possible" doesn't involve leaving one's desires behind, in order to become the abject servant of a Cause. He doesn't suddenly develop an ego-less and empty personality in order to "connect" with a goal that floats in an abstract realm.

He doesn't fall on his knees and grovel to seek public acceptance.

The mob, the herd operates on debt, obligation, guilt, and the pretense of admiration for idols. These are its currencies.

The herd, seeking some reflection of its unformed desire, constructs a social order based on need -- and the substance of that need will be extracted through coercion, if necessary, from those who already have More.

This need, and the proposition that the mob deserves its satisfaction, creates a worldwide industry.

Among the industry's most passionate and venal supporters are those who are quite certain that the human being is a tainted vile creature. Such supporters, of course, are sensing their own reflections.

The great psychological factor in any life is THE DESERTION OF INDIVIDUAL FREEDOM. Afterward, the individual creates shadows and monsters and fears around that crossroad.

Freedom is the space and the setting, from which the individual can generate the thought and the energy-pulse of a great self-chosen objective.

In that place, there is no crowding or oppressive necessity. There is choice. There is desire. There is thought.

"Being absorbed in a greater whole" isn't an ambition or philosophical prospect for the free individual. He sees that fixation as a surrender of self.

The Collective, whether envisioned as a down-to-earth or mystical group, promises a release from self. This grand solution to problems is a ruse designed to keep humans in a corral, a prison. After all, how are you going to control and eventually enslave people if you promote the notion that each individual has freedom and free choice? The abnegation of self is a workable tactic, as long as it is dressed up with false idols and perverted ideals.

Related Topic(s): Freedom; Individualism; Self, Add Tags
Add to My Group(s)
Go To Commenting
The views expressed herein are the sole responsibility of the author and do not necessarily reflect those of this website or its editors.