In a recent interview with Charlie Rose, on at least two separate occasions, Sen. Bernie Sanders called Donald Trump "A very strange man." I don't believe that he was saying this in the sense that many on the left would assume, i.e. that Trump is simply a narcissistic, self-promoting con man and buffoon. I believe Sanders was referring to the simple fact that President Trump was a genuinely difficult man to get a real bead on. This despite the reflexive vilification of, if not the majority, then certainly an enormous segment of the population.

After all, he seems to have a split personality trying dwell in the same psyche. On the one hand, Trump has been consistently and passionately pushing for policies that Sanders himself was championing during his own campaign. The truth being: if Trump actually does push through a massive public works program rebuilding America's infrastructure, and ends or renegotiates our catastrophic trade agreements, as well as makes good on his most recent promise to provide health care for all Americans, even if they can't pay for it, then he would fulfilled a good part of what Bernie Sanders himself wanted achieve.

As far as the rhetoric goes, one of the areas in which he fell short in the speech (at least as far as his domestic agenda goes) was in confusing the real need for better wages with additional employment. We of course still need more jobs. But no amount of jobs at $7.25 an hour will put an end to poverty or bring back the devastated middle class. And this was of course apart from the address's altogether bone-chilling ignoring of the overriding issue of climate change.

But, despite the knee-jerk condemnation he is already receiving in the msm, and will no doubt receive here at OEN, personally, I believe he must be either the greatest fraud and con-man of all time, or drop-dead serious about bringing about the unity he did seem to passionately seek, in addition to a better deal for the average American, in his inaugural address as well as throughout his campaign

The main problem that I see is the no small matter of his reconciling the above mentioned split vision; which I believe is due to the fact that he comes to his conviction regarding unity and prosperity from that of a billionaire businessman. His basic conviction and modus operandi appears to be: "what's good for General Motors is good for America." Perhaps I am indeed an incorrible fool, but I tend to think that his intention to do things which are bona fide atrocities to progressives (as I believe I am) such as shred government regulations, is done with the belief that they inhibit business growth and therefore job growth (which is generally the belief of most businessmen). He is (to be fair, God help me...) once again, simply looking at it from the Billionaire's albeit simplistic and warped viewpoint that "What makes me richer, is going to make America richer". While this may be misguided even from any objective historical perspective ("trickle-down economics" have failed over and over again in this country) in Trump's case, I can't honestly attribute it to malice or conscious duplicity. It is quite simply the genuine economic philosophy of most people who have born to wealth and privilege, or have achieved it during their lifetime.

On a personal note, I dropped by a local park recently, just after the election, and, as fate would have it, I actually found myself on a park bench sitting next to a real-live Trump supporter. He was in his late 30s to early 40s and watching his young son (whom he had late in life) playing on the equipment. He had dark hair, was of medium height and decidedly leaned toward hip, wearing a Steven Van Zandt bandana. The fellow was very polite and obviously a very loving Dad. And he said something I've been thinking about ever since. As I mentioned, our chat took place immediately following the election, when the anti-Trump protests on the streets of Manhattan (and around the country) had been going on for a few days. He said to me quite soberly that "what these

protesters don't understand, is that they've already gotten their revolution."

Of course, with Trump's arch-conservative cabinet picks, it is difficult for most of us to hold on to any notions of his election as being some kind of People's Revolution. In fact, it certainly does provide ballast for the argument that Trump's indeed one of history's great con men. But, I also believe that this was the real message that was received by his supporters (including our own Paul Craig Roberts): that the average Joe has been royally screwed and that Trump genuinely had every intention of putting an end to it. again, very similar to Sanders' message, whom Trump openly sympathized with at more than one point in the campaign ("Bernie never had a chance!") and whom Trump has still not knocked, despite Sanders' non-stop assault on him for the duration of the election process.

Even if Trump is as drop-dead serious as he behaves about (yes, Rob) a "bottom-up revolution" (albeit in Trump's case ironically to somehow be brought about by the members of 1% which his cabinet will mostly consist of), there still remains the issue of Trump's political inexperience and naivete. I watched Obama's reaction to some of Trump's more simplistic, populist rhetoric regarding how "this [the ignoring of Average Joe] ends now!" and I had the sense that Obama was thinking, "Oh boy, are you in for an education. Let's see how you explain that to Mitch McConnell."

I think this would be almost any billionaire's conundrum , no matter how sincere they may be about real change.

Yes, he is emotionally and temperamentally challenged. Yes, he has said outrageous things in private as well as public (Rudy Guilliani claims he's heard Bill Clinton say worse things on the golf course than Trump said in Billy Bush's van. I guess we'll never really know for certain But let's not forget JFK's endless affairs). And, yes, he should be nowhere near a nuclear code. But right now, we're stuck with him so perhaps we should perhaps just get a hold on the inevitable, non-stop finger-pointing and 24/7 holier-than-thou moral condemnation of the now President Trump, and start thinking about how to make it work, to the extent it still possibly can. Again, even Sanders says that there are parts of Trumps stated agenda which he could certainly work with.

The first thing I would like to see along those lines is the media actually pressing Trump about how he plans to reconcile his pledge to make America wealthy again (and give Average Joe that even break) without addressing the issue of income inequality, since that inequality cannot be meaningfully addressed simply by the creation of more low paying jobs. But I suppose this is a whole other article...

In any event, if the President Donald turns out to be sincere, and he is just a little foggy on a couple of issues, then perhaps Paul Craig Roberts and my friend on the park bench have indeed been on the right track and a fox has managed to get into the establishment hen-house. In that best case scenario, my most fervent hope would be that (one day soon...) someone can write an article entitled "The Education of Donald J. Trump". As Kerry said, who really knows what's really going on here.

In any event, any way one looks at it, it is going to be a very big job, for us, as well as a very strange man. 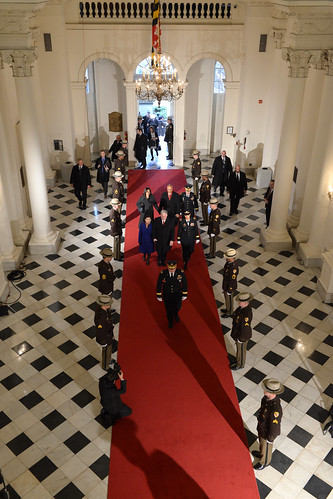