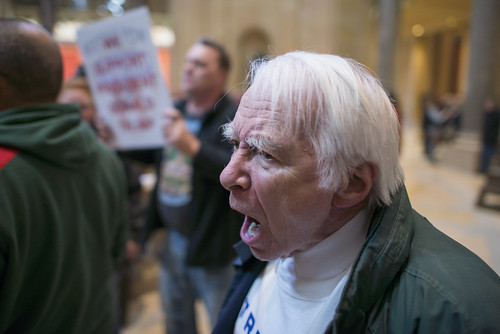 Dave Chappelle is not a politically correct kind of guy. No sooner than his Netflix specials went online he was in trouble for being offensive . His jokes were called sexist, bigoted, and homophobic as well as transphobic. Of course his jokes are offensive -- he's Dave Chappelle. He even says, "It's hard to entertain a country whose ears are so brittle."

So is this Dave covering up for his bad behavior, or is he right? Do we need to be less offended?

Offensiveness is a never-ending tug-of-war between free speech and the rules of polite society. Some people get offended at off-color jokes, while others get offended at the offendedness of others. We get offended at the way politicians speak, we get offended at different opinions. We ban books high school kids should be reading . We use our offendedness as a guiding star to tell us when something is right and when something is wrong. Oftentimes it's true; we see someone being treated poorly and we get offended. But sometimes feeling offended is a shield against exposing others to the ills of the world. It's a way to maintain civilized society, but the problem is this: whose version of civilized society is right? Whose offense is superior? In a country where we can't even agree on climate change, how can we determine whose version of polite society is best?

Should we? Being offended is sometimes a sign of being too guarded. In my family, you don't talk about offensive things. While most people have a no religion or politics at the table policy, my family -- like many families -- includes anything uncomfortable. Mental health, money, personal problems: they're all forbidden. These uncomfortable topics stay off the table to save some of the more genteel matriarchs from being offended. If we weren't so busy guarding ourselves and our families from being offended, we might have had important, valuable conversations that could have helped those in the family. My family is not uncaring or cold; we're just very concerned with appropriate behavior, and that gets in the way.

Sometimes, in order to make progress or to better ourselves, we have to go to the place that makes us uncomfortable, or that brings up uncomfortable feelings. We tell people to get outside of their comfort zone when trying to make a goal, or get a promotion, or meet new people. Getting outside of our comfort zone is important in the exchange of ideas as well.

Saturday Night Live ran a sketch making fun of mesothelioma, which is a serious form of cancer caused by asbestos exposure. It would have been easy to be angry at a comedian who can't even stop himself from laughing at his own jokes mocking a fatal disease, but for those in the mesothelioma-influenced community, the exposure is a good thing. The exposure raises awareness, and could potentially save lives. It's a rude (and slightly crass) joke, and it does some good.

If we can't play with the boundaries in things like comedy, how can we take on the offensive, the divisive, or the uncomfortable in our daily lives? In politics? In the voting booth? Where do we draw the line? Dave Chappelle may not be politically correct, but he does understand the power and necessity of talking about things other people might not appreciate. It's why Trump's campaign against the press is so insidious. As offensive as he might find what they write, a free press was literally the first thing our forefathers believed to be a fundamental choice to start the Bill of Rights.

Addressing any kind of difficult topic from an emotional place is the wrong way to go about it. Sometimes that knee-jerk reaction of shock and outrage is a sign that you've exited your comfort zone. Sometimes it's a sign that introspection and thought is needed.

Related Topic(s): Comedy; Family; Mesothelioma; Netflix; People; People, Add Tags
Add to My Group(s)
Go To Commenting
The views expressed herein are the sole responsibility of the author and do not necessarily reflect those of this website or its editors.