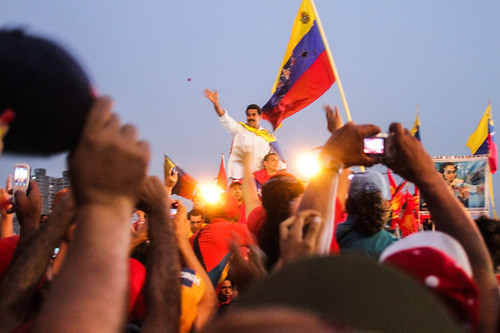 It's no wonder why Bernie Sanders' supporters are so loyal to him in spite of his pro-imperialist tendencies. He's offering them universal healthcare and adequate social benefits at a time when neoliberalism has made half of the country effectively poor. Many Americans have gravitated towards Sanders simply out of the desire to attain adequate living standards, which his policies would indeed create for them. What anti-imperialists must do is shatter the illusion that Sanders' agenda of bettering life for Americans equates to an agenda of bettering life for the world's colonized people, which Sanders has shown he doesn't want to do.

Sanders demonstrated this fact during last week's Democratic presidential debate, where he said: "Anybody that does what Maduro does is a vicious tyrant. What we need now is international and regional cooperation for free elections in Venezuela so that the people of that country can make, can create their own future."

When Sanders says this, his statements of disapproval for U.S. intervention in Venezuela are effectively negated. The efforts from Venezuela's right-wing opposition to carry out a coup against the Chavista government depend on the false narrative that Venezuela's recent elections have been rigged. The Trump administration's ploy earlier this year to manufacture political violence by moving politically motivated "humanitarian aid" to Venezuela's border is legitimized by Sanders' dishonest earlier claim about Maduro not letting in aid. The imperialist operations of the U.S. depend on its ability to control the narrative, and by confirming the Trump administration's lies about Venezuela in the minds of his left-wing supporters, Sanders is helping America subject the Venezuelan people to imperialist violence.

When Sanders' supporters haven't agreed with the imperialist narratives that he's promoted about Venezuela, Russia, Syria, or China, they've claimed that Sanders is only playing a media relations game and that he's anti-imperialist at heart. Yet his record is riddled with votes in favor of economic sanctions and military operations. He's voted for the Iran and Libya Sanction Act of 1996, the Iraqi Liberation Act of 1998 (which helped pave the way for the invasion of Iraq), the 2001 Authorization of Use of Military Force, the 2006 funding bill for ongoing operations in Iraq and Afghanistan, and the 2009 NDAA (which advanced a missile defense system in Europe and created a massive increase in troop numbers). He's voted for several foreign operations appropriations bills, and since the start of the War on Terror he's voted for the war budget and military appropriations bills in 2002, 2004, 2005, 2006, 2007 and 2008. He also showed support for Obama's global bombing campaign by voting for the military budgets of 2009, 2010, and 2013.

His facilitation of the war machine's routine functioning has been motivated by his belief that America's efforts to police the world are legitimate. He supported Clinton's 1999 bombing campaign against Yugoslavia, where centers of civilian life, including hospitals, were deliberately bombed by NATO forces. He's said that he would continue America's drone wars even after over a decade of evidence has come out that drone warfare results in the deaths of innocents. Despite his opposition to the U.S./Saudi war on Yemen, his bill which supposedly seeks to end the war would allow America's terrorism-related attacks against Yemen to continue. The bill even states this caveat, saying that it wouldn't interfere with "United States armed forces engaged in operations directed at al-Qaeda or associated forces."

The evidence is clear that if Sanders becomes president, he'll continue the global War on Terror, the American regime change projects, the new cold war against Russia and China, and U.S. support for Israel. His vilifications of Venezuela's government, his affirmation of the debunked Syria "chemical attack" narratives, his support for strengthened sanctions on north Korea, and his repetitions of all of the standard imperialist talking points about Russia and China show that he wouldn't interfere with the deep state's campaigns against these countries. His stated support for Zionism and Israel (which he's acted upon by voting for a 2014 resolution to support Israel amid its massacre that year of innocent Gazans) means he wouldn't defy Israel too far beyond scoldings about excessive Israeli military force.

All of these actions stem from the liberal interventionist worldview that Sanders shares with the rest of the Democratic Party leadership. In a foreign policy speech from 2017, Sanders said that he wants the United States "to champion the values of freedom, democracy and justice, values which have been a beacon of hope throughout the world." In other words, he wants America to act as a benevolent empire-which, like Sanders' proposal for a "two state solution" for Israel, is an unrealizable fantasy.

At best, under a Sanders presidency the U.S. would experience an increase in living standards for its own citizens while its government keeps subjecting foreign populations to economic warfare, bombings and drone attacks, and CIA destabilization efforts. Last month Sanders demonstrated his support for the latter aspect of imperialism when he praised Hong Kong's anti-China protests while not mentioning the U.S. backing behind them or the neo-colonialist nature of their goals. The wheels of the empire would keep running under Sanders, at least for as long as the U.S. can sustain them amid America's accelerating process of imperial collapse.

We can spend the 2020s supporting social democrats like Sanders in their nationalistic efforts to expand social services for Americans while imperialism continues and capitalism keeps destroying the planet. Or we can break from capitalist institutions like the Democratic Party and build a movement to depose the leadership of the United States and establish a new government, one which functions as a workers' state that moves the country towards decolonization.

If this sounds unfeasible, remember that it's what the communist movement has done with great success in numerous countries. The key to replicating their successes is to view the task of building socialism as a science-what's often referred to as the immortal science of Marxist Leninism. This science, which has been utilized to carry out anti-capitalist revolutions in China, Cuba, the DPRK, and other countries, involves figuring out how to apply revolutionary strategies to one's material conditions. And given all of the facts that I've mentioned about Sanders, a Marxist-Leninist analysis shows that supporting social democrats like him isn't the way to move America towards socialism.

It's detrimental to the cause of socialism to support a politician who effectively stands for imperialism and is actively opposed to the socialist revolutions in Venezuela and elsewhere. It's not revolutionary to advance Sanders' agenda of reforming capitalism, which is a route that the capitalist class has historically pursued as a method for maintaining bourgeois power and crushing genuine socialist movements. The world's socialist countries are at war with the U.S./NATO empire, which is doing everything possible to economically sabotage its rival powers and to sow instability within them. If Sanders sides with the Zionists, the CIA, and the capitalist class in this war, he doesn't deserve support from anti-imperialists.

Related Topic(s): Attack On Iran; Capitalism; Sanctions; Venezuela, Add Tags
Add to My Group(s)
Go To Commenting
The views expressed herein are the sole responsibility of the author and do not necessarily reflect those of this website or its editors.