Health care will be a major issue early in the new Biden/Harris administration. Unemployment is still high with over a million people applying for unemployment benefits last week and 42.6% of working age people without a job. 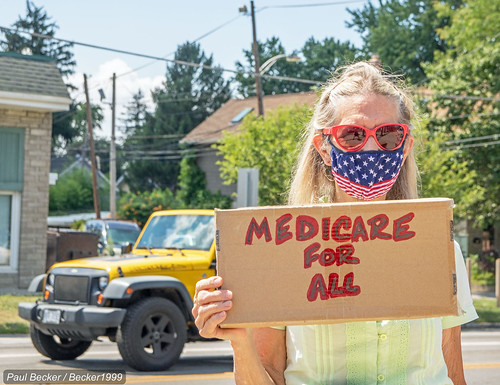 Biden's healthcare plan looks like a replay of the health reform process of 2009-10 when the Democrats effectively divided the movement in support of national improved Medicare for all and pushed through the so-called Affordable Care Act (ACA), which passed without Republican support. Health insurance and pharmaceutical corporate profits have soared since then while people struggle to afford healthcare.

In a time of the COVID-19 pandemic when over 250,000 people have already died and the University of Washington predicts over 500,000 deaths by the end of February, we cannot allow a repeat of the failed ACA. It is unconscionable to create anything less than a universal single payer healthcare system.

The ACA Challenge in the Supreme Court

This week, oral arguments in a case against the ACA were heard by the US Supreme Court. This is the third Constitutional challenge to the law and the second time the individual mandate, which requires people to have health insurance or pay a penalty, has been questioned.

During the first challenge, I was part of a group of fifty physicians and lawyers who filed an amicus brief with the court arguing that national improved Medicare for all is the most Constitutionally-sound healthcare system. Read the open letter here: amicus-brief-open-letter

Traditional Medicare has been our national healthcare system for seniors and people with certain health conditions since 1965. It meets the definition of "taxation for the general welfare" in Article 1 section 8 of the Constitution. On the other hand, the ACA uses our public dollars to subsidize private health insurers with hundreds of billions of dollars every year. Those health insurers then pay their CEOs multi-million dollar salaries and bonuses and dividends to their stockholders. The Congressional Budget Office estimates those subsidies will be $920 billion in 2021.

As if that wasn't bad enough, private health insurers are taking over our public insurances, Medicaid and Medicare. Most Medicaid enrollees are in plans managed by private insurers. Over a third of seniors are in private "Medicare Advantage" plans that rip them off when they have health problems. Private insurers are working aggressively to increase their Medicare takeover. Private insurers also provide health plans to public employees and the military. Modern Healthcare reports that by 2017, 50% or more of the revenue of the top health insurance corporations came from the government.

Many of us saw what the ACA actually was, a bailout for the private insurance industry that had raised premiums so high people couldn't afford them. The ACA not only subsidized people purchasing health insurance, it required the government to sell the plans and forced people to buy them with the individual mandate.

Ten years after its passage, the ACA has left our healthcare system in a similar state to when it began. Healthcare costs are too high. People are delaying and avoiding necessary care. Hundreds of thousands of households still become bankrupt each year due to medical illness. And at a time when support for national improved Medicare for all is high, the incoming president is advocating for more of the same.

Related Topic(s): Affordable Care Act Aca; Medicare For All; Obamacare, Add Tags
Add to My Group(s)
Go To Commenting
The views expressed herein are the sole responsibility of the author and do not necessarily reflect those of this website or its editors.