I really thought that I was just bringing back some souvenir mugs. I had no idea that for my husband, one of the mugs would cause his skin to crawl as much as if he had awoken after having fallen asleep on an anthill. Let me explain.

As usual, after going through an experience, such as this visit, that was strong enough to cause a tectonic shift in my consciousness, I sought to find ways to bring the memories home for me to relive as much as I could. Typically, when we think of souvenirs, what generally comes to mind are the silly trinkets that fill every gift shop in every tourist trap around the world: refrigerator magnets, t-shirts, pencil holders and ashtrays emblazoned with names of locales from Buffalo to Bora Bora. But when you remember that the root of the word souvenir is the verb to remember in French you can see how sometimes a souvenir can be more than a bobble-headed hula girl for your dashboard. There are times for all of us when all we want is to look/ hold/breathe in our souvenir so as to take us back to an experience that rocked our world. It was *this* type of souvenir that I wanted to find at the Museum.

I drank in as much as the museum had to offer about South Africa's full history and the birth and death of apartheid. It was heavy and awesome, not in the hipster version of the word, but the true definition of inspiring awe. I knew that I had to have something to take home, some souvenir, that would immediately allow me to relive this experience whenever I needed to.

The gift shop did not have any gifts that fell under the category of "to relive this profound experience buy this." Instead there were posters, t-shirts, bookmarks, and bracelets; just the usual items with no major surprises. Of course, there were no bobble-headed hula girls for sale.

I opted to purchase a bracelet with the words, "respect, equality, freedom" encircling it, in addition to the logo of the Apartheid Museum. I also found a magnetic paper clip topped with a quote from Papa Mandela:

Boy did I love that! Yet what I found myself drawn to the most, and surprisingly so, were the mugs that had upon them some of the more hateful symbols of that past era. One mug in white read "Whites Only" in stark black text. The other in black with white text read, "Nonwhites Only." These were the apartheid versions of the Jim Crow signs from down South. They also mirrored the startling entry points to the museum itself. 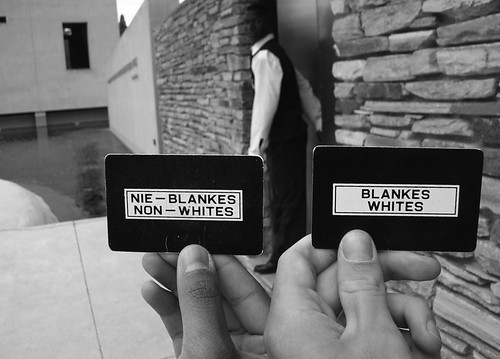 Both entrances take you through a brief glimpse into the lives of those classified as white or nonwhite, depending on your door. There are old ID cards with designations listed as white, colored, or black. Also included are personal stories about how the classification was done and what effect it had on people's lives. What was both surprising and not so surprising was that the untrained people doing the classification were not geneticists or ethnologists, but mid-level bureaucrats imbued with the power to determine one's life caste simply by their visual assessment. Even those who were documented as being born to colored parents could be reclassified at the whim of these officials to black or Bantu, the lowest rung on the social ladder.

In my group of visitors to the museum, we were about evenly split between white and nonwhite. I could tell that many of my liberal white colleagues were a little uncomfortable about this in your face racial exercise lacking social nicety or the couching of the racial animus that we are more used to in present-day US society. Being asked to go through these entrances laid bare the dark and ugly that is a society divided by race.

Adolescent medicine physician, egalitarian feminist, free thinker, veteran of the infertility wars & geriatric mom to the best (& most photogenic) kidlet ever. I plan to be a photographer, writer and knitting store owner when I grow up, whenever (more...)
Related Topic(s): American_Apartheid; Apartheid; Apartheid; Segregation; South Africa; Story; Story Writing; StoryTelling, Add Tags
Add to My Group(s)
Go To Commenting
The views expressed herein are the sole responsibility of the author and do not necessarily reflect those of this website or its editors.

The Impact of a Mug: A Souvenir Story