The Senate Judiciary Committee chair has been around long enough to know that his refusal to hold hearings on a Supreme Court nominee is at odds with historical precedent and the Constitution. 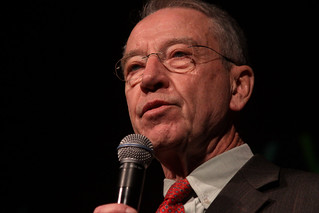 In nominating a replacement for Supreme Court Justice Antonin Scalia, President Obama has provided plenty of indications that he is willing to go more than halfway in trying to find common ground with Senate Republicans.

But don't bet that the Republicans will be in a compromising mood.

For several days this week, there was speculation that the president might nominate Nevada Governor Brian Sandoval, a relatively moderate Republican who The Washington Post notes "is aligned with Democrats on some key issues, including abortion rights and the environment. As governor, he has moved to implement the Affordable Care Act, and has said he considers same-sex marriage to be a settled issue."

Despite Sandoval's mixed record on regulatory and labor issues, as well as reproductive rights, Senate minority leader Harry Reid, D-Nevada, talked up the Sandoval prospect. But the talk ended abruptly on Thursday, when Sandoval removed his name from consideration.

Sandoval recognized the reality of the circumstance set up by Senate Republicans. He was unacceptable to conservative purists. And he was not going to get a hearing from the hyper-partisan hypocrites who simply want to say "no" to this president.

That's where this process gets complicated.

No one expects hardliners like Texas Senator Ted Cruz to accept a nominee who does not meet the senator's extreme definition of acceptable conservatism. Indeed, as he bids for the Republican presidential nomination, Cruz is airing ads that declare: "Life, marriage, religious liberty, the Second Amendment. We're just one Supreme Court justice away from losing them all."

But Cruz is not the problem. An Obama Supreme Court nomination (supported by Democrats and a few reasonable Republicans) might be able to advance without the Senate's most fanatical right-wingers.

The problem is with partisan hypocrites like Senate Judiciary Committee chairman Charles Grassley, the Iowa Republican who this week signed a letter (along with the other Republicans on the committee) vowing to "not hold hearings on any Supreme Court nominee until after our next president is sworn in on January 20, 2017."

Related Topic(s): Chuck Grassley; Hypocrisy; Judges; Nomination; Politics; Republican, Add Tags
Add to My Group(s)
Go To Commenting
The views expressed herein are the sole responsibility of the author and do not necessarily reflect those of this website or its editors.