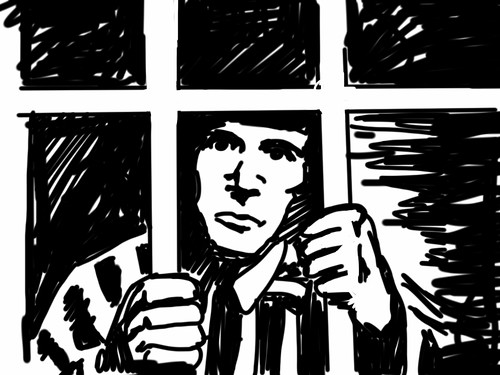 My best friend from high school was in and out of the prison system the last two decades of his life. He was a drug addict. This was before the opioid epidemic; his poison was crack cocaine. His father had been a raging, violent alcoholic and his mother was a broken woman with chronic illnesses. My friend spent most of his adult life trying to take care of her.

His addiction put in him in dire need of cash all the time, even as it made it impossible for him to hold a steady job. It drove him to do stupid things. He once stole my car and sold my son's schoolbooks, which were in the back seat, to get some cash. He would bang on my door late at night, asking for some money to keep the dealers he owed from giving him a beat-down. He finally ended up stealing items from his mother's house and pawning them. He went to jail for that, then for the next several years kept going back to jail for various probation violations: often for getting caught drinking in public somewhere.

He eventually did a 13-month stretch in state prison, where he danced a fine line between the violent, racially polarized gangs that the prison authorities allowed to run amok. He refused to join the white racists but was regarded warily by the black gangs. He got beatings from people on both sides but was also able, sometimes, to act as a peacemaker between them.

When he got out of the pen, his life continued largely as before. He tried to set himself up as an independent contractor, doing house repairs, roofing, carpet laying, yard work. His mother died. He had long lost custody of his only son. He still struggled with crack, but dulled his psychic pain mostly with alcohol. He died at some point in his fifties, found in his cheap apartment two or three days after his death, corpse bloated in the sweltering heat of a Tennessee summer.

That's it. That was his life. That's all he had. He was a dope addict. He was a convicted criminal. He was a repeat offender. He was a desperate liar and a thief. He was a lost soul of no use to the society he lived in and then he died. That's it.

He was also without exaggeration or nostalgic sentimentality the kindest, most sweet-natured, open and gentle person you could ever meet. He loved music with a passion so deep it touched the core of the earth. His failings tormented him like hot coals. He couldn't understand what had happened to him, why he couldn't escape addiction, why his mind was so muddled, why it wouldn't stop roaring long enough for him to ever gather himself and be real, be whole, be normal.

He was beaten and threatened all through his boyhood. Even in high school he was a nervous wreck. He used to sneak down to our house in the middle of the night after a row with his father and try to sleep in the hedgerow of our yard, or else on our back porch. Fortunately, the dogs would always alert us, and we'd find him and bring him in, make a bed for him on the couch. He loved my family with a searing love that never abated for the 50 years he knew us.

I think of my friend whenever I hear some bullshit-bloated politician or commentator dismissing the humanity and dignity of criminals and prisoners. I thought of my friend today, when I read a story about Jonathan Faircloth, a 33-year-old prisoner in Alabama dying of colon and liver cancer that's being left untreated by the authorities. He too was back in prison for probation violations another drug addict who, while trying to make a normal life for his wife and children, got slam-banged by his addiction again.

I thought of my friend when I read the reply of Etowah County Sheriff Jonathon Horton after the Alabama media asked him about this human being left to die without treatment:

"He's using his sickness as an excuse to get out of jail over and over again. In layman's terms, he just ran out of his chances. So the judge revoked [his probation] and says he has to serve his days," Horton said.

He using his sickness his Stage 4 colon cancer which has now spread to his liver and will kill him, if left untreated, by next year if not before as an "excuse." An excuse. Stage 4 cancer as an excuse.

I read these words, and I think of the countless sons of bitches across the country howling for ever-more punitive degradations the dimwitted bulls in their stupid, prissy knit uniforms like this Etowah goober, the tee-shirted a**holes pounding out inhumane bullshit on Twitter, the sleek politicians in designer suits, and the millions and millions of people committing spiritual suicide by attending to the brutal, barbaric blather of these walking, rotting husks.

I think of them, and I think of my friend, a parole-violating drug-addicted repeat-offending criminal of no use to the society he lived in and I know by God, I know! which side I'm on.

Related Topic(s): Alcoholic; Human Beings; Human Rights; Politicians, Add Tags
Add to My Group(s)
Go To Commenting
The views expressed herein are the sole responsibility of the author and do not necessarily reflect those of this website or its editors.