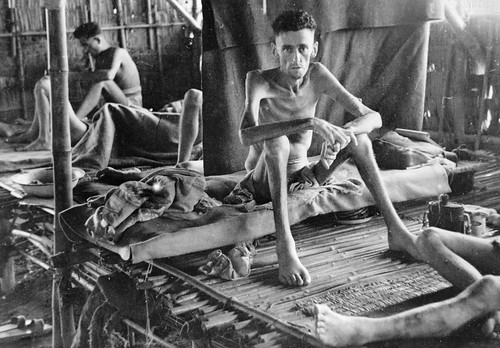 "The gates of hell are open night and day;
Smooth the descent, and easy is the way:
But to return, and view the cheerful skies,
In this the task and mighty labor lies." Vergil, The Aeneid

Not since Edmund Gosse's classic memoir, Father and Son: A Study of Two Temperaments, has an estranged son written more nobly of his father than Douglas Valentine. Nobly because, apart from a brief author's note, the son is absent from the book, except as a faithful and creative amanuensis to his father's chilling, dark, life-long secret of his WW II years as a prisoner of war of the Japanese. A secret so horrifying that a reader can't help but realize that its harboring throughout the thirty plus years of the son's life could do nothing but poison his relationship with his father as it ate away at his father's soul.

Responding to his ailing father's call to come home and hear his tale of the war experiences that have tormented him his whole life, the son discovers that his father has awakened him to his vocation as a writer. By listening, the son receives the gift of telling. He answers the call. And in telling his father's story (originally in 1984; see 2016 edition here) the son opens himself to other serendipitous opportunities that would result in other books exposing the treacherous secrets of state criminals, notably the CIA (The Phoenix Program) and the Drug Enforcement Administration (DEA). While these latter books have made Valentine's reputation, his first and most intimate, The Hotel Tacloban, stands out in so many ways.

Joseph Campbell, in The Hero with a Thousand Faces, describes this acceptance of the call as follows:

The first stage of the mythological journey -- which we have designated as the 'call to adventure' -- signifies that destiny has summoned the hero and transferred his spiritual center of gravity from within the pale of his society to a zone unknown".the hero can go forth on his own volition to accomplish the adventure, as did Theseus when he arrived in his father's city, Athens, and heard the horrible history of the Minotaur.

While I doubt Valentine or his father -- Douglas Valentine, Sr. -- considers himself a hero in any popularly understood sense, both are heroes in a deeper sense. They are truth tellers. They tell truths that, if closely heard and meditated upon, could transform the lives of other suffering souls, just as they granted the father a semblance of peace and began to heal the broken bond between father and son. While nothing is more unheroic and conventional than the social lie that glorifies war and the modern Minotaurs who demand an endless supply of war victims to feed their blood lust, father and son make it clear that war is nothing but a sick racket. Many people will nod in agreement, but the Valentines, through graphic illustrations, courageously lance the festering wound that war's depravity inflicts on all who experience it.

Part ventriloquistic non-fiction memoir, part history, part murder mystery, part war story, part confessional -- wholly beyond categorization, really -- The Hotel Tacloban is a mesmerizing read that will leave you stunned and shaken, but also awe-struck by the courage and depravity to which humans can rise and fall. So gripping is the story that I find it shocking that it hasn't yet been made into a movie.

It is also a cautionary tale that exposes the destructive effects that guilty secrets can have on soldiers, who have returned from war terrorized by their experiences, and their families. And, by implication, on anyone who harbors secret nightmares that eat them alive.

Perhaps I would best describe it as a tale told in an Aristotelean tragic style that engrosses the reader from the start as one is slowly -- as if stepping into quicksand -- drawn into the story of a patriotic sixteen year old boy soldier's war nightmare. With each page the tension builds as the reader is led by the action to feel pity, fear, and disgust -- the gamut of emotions that lead to a catharsis, of sorts. At the end the reader, together with father and son, exhales, takes a deep breath, and exits the theater profoundly shaken by the experience. Shaken into life's profound mystery.

Masterful in structure and eloquently written in poetic prose that belies its subject matter, it is reminiscent of the best American war writing.

On the unpublicized orders of General Douglas MacArthur ("Dougout Doug"), poorly trained units of the U.S. Army 32nd Division are unexpectedly diverted to New Guinea to back up undermanned and beleaguered Australian troops trying to stop a Japanese advance to the southern Port Moresby. Among them is Douglas Valentine, Sr, a "sixteen, not too bright, runaway from a broken home in Pleasantville, New York, an orphan of the Great Depression." His best friend, Bobby Stevenson, eighteen, an Indiana farm kid and former hoopster, who cannot swim, dies in an amphibious landing, despite Valentine's valiant efforts to drag him to the safety of a rescue craft. "And when Bobby's dripping body rose out of the sea," he says, "I saw that both his legs were gone from above the knees. Not even his pants remained".That's when I came apart."

So this kid Valentine, who should have been in his sophomore year in high school, despite coming apart, joins his unit chasing the Japanese through the jungles up to the mountain ridges. Here's is how Doug Valentine, Jr/Sr describe it:

Related Topic(s): Government; Guilt; Redemption; Relationships; Soldiers; Truth; War, Add Tags
Add to My Group(s)
Go To Commenting
The views expressed herein are the sole responsibility of the author and do not necessarily reflect those of this website or its editors.