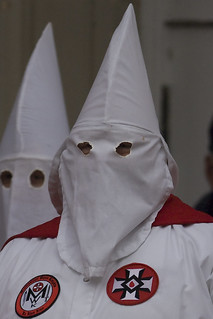 Happy post-Halloween Truthseekers! There may be a surprise or two, including some Halloween hi jinks that make you go "Hmmmmmnnnnnnn..."

Like the freaks in Oklahoma who thought it would be "funny" to dress up as KKKlansmen and burn some crosses. Hilarious, right? Oh, and one of the jerky boys is married to the mayor. Oops.

"The husband of a small Oklahoma town's mayor is apologizing for a Halloween prank in which he and others dressed as members of the Ku Klux Klan and held a cross in front of a fire to make it appear it was burning.

"Cary Sharp, husband of Lahoma Mayor Theresa Sharp, told KWTV that he's embarrassed and that he shamed his family and friends.

"Garfield County Sheriff Jerry Niles told the Enid News & Eagle that no law was broken, but said the prank was 'very poor judgment.' Niles says costumes were removed and the fire was extinguished at the request of deputies.

"Theresa Sharp said she was not at the party and that she 'in no way' condones the activity."

Wow. That's a lapse in judgement you don't see everyday. How does this happen?! Were they just all sitting around the TV one night, watching Duck Dynasty and drinking PBR, and one of 'em says, "hey, why don't we put on some hooded robes and burn some crosses, won't that be a hoot? Hell, I bet my wife, the mayor, will even loan us the sheets!"

Speaking of morons, the GOP presidential hopefuls are preparing a list of demands for the next debate. Hair gel and Cool Ranch Doritos top the list.

Kathy never expected a career in radio as a talk show producer. Born and raised in Atlanta, Georgia, Kathy was completing her nursing degree when in 2001 - in an emergency - she was asked to fill in as the producer of Mike's program. Within a few (more...)
Related Topic(s): Cross; Halloween; Ku Klux Klan; Mayor, Add Tags
Add to My Group(s)
Go To Commenting
The views expressed herein are the sole responsibility of the author and do not necessarily reflect those of this website or its editors.