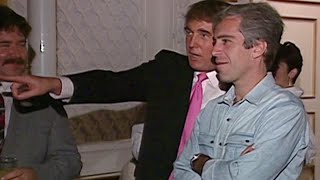 But none was odder than the day I was invited to lunch in New York City with the by now notorious figure Jeffrey Epstein. The golden boy of Manhattan and Palm Beach society now sits in a grim jail cell accused of having sex with underage girls. He's been doing this in plain view since the early 1990's but, until recently, he seemed bullet-proof.

Soon after I walked into the entrance of Epstein's mansion on E 71st Street, said to be the city's largest private home, a butler asked me, "would you like an intimate massage, sir, by a pretty young girl?" This offer seemed so out of place and weird to me that I swiftly declined.

More important than indelicacy, as an old observer of intelligence affairs, to me this offer reeked of ye old honey trap, a tactic to ensnare and blackmail people that was old when Babylon was young. A discreet room with massage table, lubricants and, no doubt, cameras stood ready off the main lobby.

I had arrived with Canada's leading lady journalist who was then close to Epstein's sometime girlfriend, Ghislaine Maxwell and, it was said, procuress something Maxwell denies. Bizarrely, Maxwell believed that I could get KGB Moscow Center to release satellite photos that showed the murder on his yacht of her father, the press baron Robert Maxwell, who was a well-known double agent for Israel and KGB, and a major criminal.

Also present was the self-promoting lawyer, Alan Dershowitz, who had saved the accused murderer Claus von Bulow, as well as a titan of the New York real estate industry (not Trump) and assorted bigwigs of the city's elite Jewish society. All sang the praises of Israel.

Epstein reportedly had ties to Donald Trump, Bill Clinton, Britain's Prince Andrew and repeatedly flew them about in his private jet, aka "the Lolita Express." All guests deny any sexual activity. I turned down dinner with Prince Andrew.

Epstein's residence in Manhattan and Palm Beach, both of which I visited, were stocked with young female "masseuses." All were working class girls making big money in their spare time. I did not see any interactions between these girls and the guests.

Epstein and Maxwell became too big for their britches. They flaunted their sexual adventures and laughed at New York society. Everyone wondered about the source of Epstein's lavish income but no one knew its origins. He claimed to be an exclusive money manager for a group of secretive millionaires. But the only one identified was billionaire Leslie Wexner, the owner of L Brands and Victoria's Secret. Wexner denied any knowledge of Epstein's alleged crimes.

Besides sexual frolics, Epstein and Maxwell were up to many odd things. The FBI found diamonds, cash and a fake passport when raiding his mansion and documents showing his net worth at $559,120,954.00. The IRS tax people will be eager to review the sources of this income.

It seems likely that political influence was brought to bear on then US attorney Alexander Acosta (he just resigned under fire last week) to make a sweetheart deal with Epstein, who had been charged by Florida with child molestation. Epstein got off with a token, 13-month jail sentence that allowed him to work from his office much of the day.

Were Trump or Clinton involved? How much did they "party" with Epstein and revel in his fleshmart? There was talk of some sort of "intelligence" angle to the affaire Epstein that spared him a harsh sentence.

A respected former CIA official, Phil Giraldi has come right out and accused Epstein of being an Israeli agent of influence. Epstein was let off with a slap on the wrist on his first child abuse charge, says Giraldi, because of his powerful Israel connections. To Giraldi and this writer, the Epstein "massage" operation was a classic intelligence operation designed to blackmail men of influence into doing Israel's bidding. Clinton had reportedly already fallen into this trap years earlier while still president.

Now watch this stinking pile of corruption be hurriedly covered up. Talk about draining the swamp.

Related Topic(s): Corruption; Girls; Intelligence; Israel; Jeffrey Epstein; Trump, Add Tags
Add to My Group(s)
Go To Commenting
The views expressed herein are the sole responsibility of the author and do not necessarily reflect those of this website or its editors.