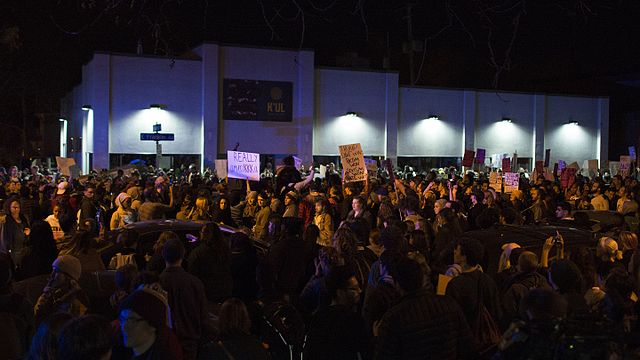 As an Indian living hundreds of miles away from the United States with no plans whatsoever to visit that land as a tourist or as a job seeker, I am amused by the brickbats President Donald Trumps has been receiving. What is wrong with his tagline--America first? It is all about jobs stupid.

His immediate predecessor, Barack Obama, used to accuse India and China of stealing American jobs. Hillary Clinton, as New York Senator, had forced an Indian software giant to set up its shop in her constituency to run back-end operations for which it received a contract.

All the worthies demonstrating against President Trump in Washington and elsewhere need lessons in history.

Because neither Trump's anti-immigrant rant nor his anti-China rhetoric is a new Americanism as many commentators make us believe.

Two hundred thirty-five years ago, that is in the year 1882, the US felt it necessary to target the Chinese in its own economic interest--jobs.

The Congress passed the Chinese Exclusion Act to bar Chinese labour from entering the country. The law was regularly renewed till 1943 when it was repealed.

Likewise, the backlash against migration, which is manifesting today as Trumpism, was in full play in America as nativism, in the years before World War I.

Congress regularly passed laws limiting immigration. These laws were regularly vetoed by President of the day though.

The short-point is that there is nothing new in President Trump's approach of America first, which suits today's American requirements. And countries like India will have to live with the new reality that makes H-1B visas to appear like a spec in the sky.

Take it from me Indian business leaders know the art of booking profit under sunshine and shower.

Well, old and traditional allies of the US in Europe are worried as President Trump has said that under him Washington will no longer share the entire burden of providing security to the nations thousands of miles of sea water away from the American mainland.

Why cannot they put their act together instead of outsourcing to the US even if they, like the US, were made to live with the belief that there is a deadly 'red' adversary looking to conquer territories?

The Dragon too looks worried because Trump has jolted Beijing by questioning the 'one China' policy. It cannot breathe easy when the US, still militarily the most powerful nation, ups the ante on a 'core' matter. Yes, China still boasts that it is capable of taking on all the adversaries in the world, real and imaginary. It is a claim. Nothing more nothing less.

Each country may have its own set of concerns because the real face of the US 'trump card' is yet to be exposed. In India, however, early opinion was divided with one section sure of 'acche din' (Good Days) ahead in the Indo-US bilateral relations and another taking a dim view of an unpredictable leader in the White House.

Whatever doubts have been there were set at rest by the telephone call from the White House to the 7RCR (Indian Premier's official residence) on Jan 24. While Prime Minister Narendra Modi was among the first leaders to phone Trump and congratulate him on his victory, Trump chose to telephone Modi ahead of his calls to Moscow, Tokyo, Beijing or even European capital.