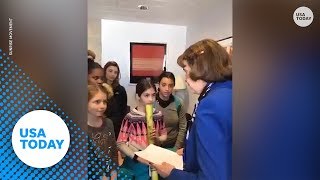 One imagines that Senator Dianne Feinstein would like a do-over of her colloquy with some young people on Friday afternoon. A group of school students, at least one as young as seven, went to the senator's San Francisco office to ask her to support the Green New Deal climate legislation. In a video posted online by the Sunrise Movement, she tells them that the resolution isn't a good one, because it can't be paid for, and the Republicans in the Senate won't support it. She adds that she is at work on her own resolution, which she thinks could pass. Then, when the group persists in supporting the Green New Deal, which was introduced by Representative Alexandria Ocasio-Cortez, Feinstein responds, "You know what's interesting about this group? I've been doing this for thirty years. I know what I'm doing. You come in here and you say, 'It has to be my way or the highway.' I don't respond to that. I've gotten elected, I just ran, I was elected by almost a million-vote plurality," she continued. "And I know what I'm doing. So, you know, maybe people should listen a little bit."

Well, maybe. But Feinstein was, in fact, demonstrating why climate change exemplifies an issue on which older people should listen to the young. Because -- to put it bluntly -- older generations will be dead before the worst of it hits. The kids whom Feinstein was talking to are going to be dealing with climate chaos for the rest of their lives, as any Californian who has lived through the past few years of drought, flood, and fire must recognize.

This means that youth carry the moral authority here, and, at the very least, should be treated with the solicitousness due a generation that older ones have managed to screw over. Feinstein's condescension, though it's less jarring in the video of the full encounter, which also shows gracious moments -- including one when she offers a young person an internship -- echoed that of Nancy Pelosi, from earlier this month, when the Speaker of the House talked about "the green dream, or whatever they call it. Nobody knows what it is, but they're for it, right?"

This smugness stings -- although, of course, it stings far less than the climate denialism emanating from the White House. But that's not really the problem. The problem is that, even if you give Feinstein every benefit of the doubt, her response illustrates the fix we're in. Later Friday evening, Feinstein's aides released portions of her proposal, and on first view they appear to be warmed-over versions of Obama-era environmental policy: respect for the Paris climate accord, a commitment to a mid-century conversion to renewable energy.

It's not that these things are wrong. It's that they are insufficient, impossibly so. Not insufficient -- and here's the important point -- to meet the demands of hopelessly idealistic youth but because of the point that the kids were trying to make, which is that the passage of time is changing the calculations around climate change.

Feinstein is, in fact, right: on most questions, a "my way or the highway" attitude doesn't get you very far. If I'm a lawmaker and I think that the minimum wage should be $30 dollars an hour, and you're one who thinks that eight dollars is generous, we'll probably try to pass a law that sets the mark somewhere near $15'' dollars, and then argue about it again after the next election. There would be no point in holding out for what I can't get. But, in the case of the environment, the opponent is not the Chamber of Commerce. The opponent is physics, and physics doesn't negotiate. It's not moved by appeals to centrist moderation, or explanations about the filibuster. And it has set a firm time limit. Scientists have told us what we must do and by when, and so legislators must do all they can to match those targets. The beauty of the Green New Deal legislation is not that it's shiny or progressive or a poke in the eye to the oil companies. Its beauty is that it actually tries to meet the target that science has given us.

The irony is that, when Feinstein said she's been "doing this for thirty years," she described the precise time period during which we could have acted. James Hansen brought the climate question to widespread attention with his congressional testimony in 1988. If we'd moved 30 years ago, moderate steps of the kind that Feinstein proposes would have been enough to change our trajectory. But that didn't get done, in large part because oil and gas companies that have successfully gamed our political system didn't want it to get done. And the legislators didn't do anywhere near enough to fight them. So now we're on the precipice. Indeed, we're over it. The fires that raged in California last fall were the fires of a hell on earth.

Given the failure of old-style politics on this issue, it is no surprise that youth are taking the initiative. Ocasio-Cortez is the youngest congresswoman in American history. The Green New Deal was hatched by the Sunrise Movement, which is composed of recent college graduates. And they are ancient compared with the 16-year-old Swedish activist Greta Thunberg, who was in Paris last week to watch thousands of French youths join her in spreading the Friday for Future strikes, in which students skip school to demonstrate for climate action.

"You didn't vote for me," Feinstein said to one of the young people in her office. Which was true, because the girl in question is 16. In our reigning political calculus, that makes her powerless -- she can't vote and she doesn't have money to give. But that calculus must shift; the job of older people, at this late date, is to have the backs of the young. We have skills to bring to the task: Feinstein has amassed a career's worth of legislative savvy, and she can put it to good use here; Ocasio-Cortez could doubtless use the help. But, having blown our chance at leading, it's time for those of us of a certain age to follow, with all the grace that we can still muster.

Bill McKibben is the author of a dozen books, including The End of Nature and Deep Economy: The Wealth of Communities and the Durable Future. A former staff writer for The New Yorker, he writes regularly for Harper's, The Atlantic Monthly, and The (more...)
Related Topic(s): Climate; Green New Deal; People; Students; Youngsters, Add Tags
Add to My Group(s)
Go To Commenting
The views expressed herein are the sole responsibility of the author and do not necessarily reflect those of this website or its editors.