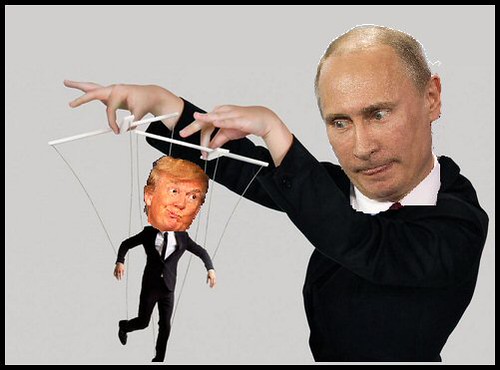 The UK Guardian, and particularly Luke Harding, lead author of Thursday's Kremlin papers appear to show Putin's plot to put Trump in the White House, are heaping still more discredit on what was once a respectable newspaper. This long story (long in both senses of the word) regurgitates "what are assessed to be leaked Kremlin documents" and adds a bit of drama by quoting an ex-UK ambassador to Russia calling the documents "spell-binding."

The story is all too familiar; this time, however, we are supposed to believe the all-out effort to help Trump is enshrined in purloined "Kremlin papers," which are unbelievably (literally) prescient -- clairvoyant, actually. So much so, that they might have been written in the last month or two.

Harding and two other Guardian hired hands -- Julian Borger and Dan Sabbagh -- spin quite a tale about Putin ordering various Russian intelligence agencies to help an impulsive and "mentally unstable" Trump to become president. Now, whatever one thinks of Putin, it seems to me doubtful that he would go to extraordinary lengths to ensure that Russia would have to contend with a president of that kind of temperament with his fingers on the nuclear codes.

As for clairvoyance, the Guardian notes, with zero sense of embarrassment, "The papers appear to set out a route map for what actually happened in 2016." If there is such a thing as retrospective clairvoyance, it seems far more likely that Harding and co. extrapolated from events of more recent years to show how -- even then -- the Kremlin was out to force a "social explosion" to weaken the president. Sounds a lot like "sow seeds of distrust" which came into vogue a bit later.

And, if that were not enough, the purloined Kremlin papers add:

"There were international benefits from a Trump win, the Kremlin stresses. Putin would be able in clandestine fashion to dominate any US-Russia bilateral talks, to deconstruct the White House's negotiating position, and to pursue bold foreign policy initiatives on Russia's behalf."

Need more? As if to prove it has no shame, The Guardian echoes the now-totally discredited "Steele Dossier," which the Democrats paid for and which Democratic-friendly U.S. security services used to a fare-thee-well against Trump. Harding and his co-conspirators add darkly that:

"There is also apparent confirmation that the Kremlin possesses kompromat, or potentially compromising material, on the future president, collected -- the document says -- from Trump's earlier 'non-official visits to Russian Federation territory.'"

Nihil Obstat: There is nothing to prevent The Guardian from regurgitating the old canard about the Russians hacking into the computers of the DNC to steal emails (which showed how the deck was stacked against Bernie Sanders), and then giving them to WikiLeaks to publish.

The Guardian feels free to breathe new life into that old canard without fear of contradiction: A matter of weeks after the security council meeting, GRU [Russian military intelligence] hackers raided the servers of the Democratic National Committee (DNC) and subsequently released thousands of private emails in an attempt to hurt Clinton's election campaign.

Readers of The Guardian and other mainstream media have no way of knowing that the alleged Russian hacking of the DNC fable was long ago expressly refuted by the horse's mouth testimony of the head of the cyber firm, CrowdStrike, to whom the FBI deferred to investigate the DNC computers. That testimony by Shawn Henry was given on Dec. 5, 2017 to the House Intelligence Committee. It gave the lie to claims that there is technical evidence that Russia hacked the DNC emails that WikiLeaks published on July 22, 2016. Henry admitted under oath that there is no such evidence.

Ray McGovern works with Tell the Word, the publishing arm of the ecumenical Church of the Saviour in inner-city Washington. He was an Army infantry/intelligence officer and then a CIA analyst for 27 years, and is now on the Steering Group of Veteran Intelligence Professionals for Sanity (VIPS). His (more...)
Related Topic(s): Guardian; Luke Harding; Spin; Trump; Vladimir Putin, Add Tags
Add to My Group(s)
Go To Commenting
The views expressed herein are the sole responsibility of the author and do not necessarily reflect those of this website or its editors.