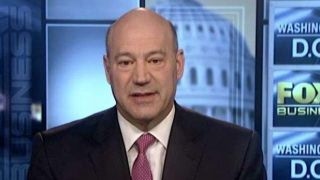 I'm reminded of Donald Trump's comment that he didn't pay federal income taxes because he was "smart." And billionaire Leona Helmsley's "only the little people pay taxes."

What Cohn was getting at is how easy it is nowadays for the wealthy to pass their fortunes to their children, tax-free.

The estate tax applies only to estates over $11 million per couple. And wealthy families stash away dollars above this into "dynastic" trust funds that escape additional taxes.

No wonder revenues from the estate tax have been dropping for years even as wealth has become concentrated in fewer hands. The tax now generates about $20 billion a year, which is less than 1 percent of federal revenues. And it applies to only about 2 out of every 1,000 people who die.

Now, Trump and Republican leaders are planning to cut or eliminate it altogether.

There's another part of the tax code that Cohn might also have been referring to -- capital gains taxes paid on the soaring values of the wealthy people's stocks, bonds, mansions and works of art, when they sell them.

If the wealthy hold onto these assets until they die, the tax code allows their heirs to inherit them without paying any of these capital gains taxes. According to the Congressional Budget Office, this loophole saves heirs $50 billion a year.

The estate and capital gains taxes were originally designed to prevent the growth of large dynasties in the U.S. and to reduce inequality.

They've been failing to do that. The richest 1 tenth of 1 percent of Americans now own almost as much wealth as the bottom 90 percent.

Many of today's super rich never did a day's work in their lives. Six out of the 10 wealthiest Americans alive today are heirs to prominent fortunes. The Walmart heirs alone have more wealth than the bottom 42 percent of Americans combined.

Rich millennials will soon acquire even more of the nation's wealth.

America is now on the cusp of the largest inter-generational transfer of wealth in history. As wealthy boomers expire, an estimated $30 trillion will go to their children over the next three decades.

Those children will be able to live off of the income these assets generate, and then leave the bulk of them -- which in the intervening years will have grown far more valuable -- to their own heirs, tax-free.

Related Topic(s): Money; Taxes; Wealth Concentration; Wealth Inequality, Add Tags
Add to My Group(s)
Go To Commenting
The views expressed herein are the sole responsibility of the author and do not necessarily reflect those of this website or its editors.