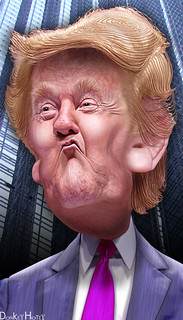 Presumptive Republican presidential nominee Donald J. Trump - who is still about 200 delegates short of passing the threshold for the nomination - is starting to look for donors for the general election campaign, large donors. The Donald, who has made a repeated point of campaigning as a populist who is very, very rich and said, or repeated what others have said, that he is simply too rich to be bought, is now seeking to have others spend on his campaign.
And he won't be going the populist route of Bernie Sanders, whose average campaign contribution is $27.
No, he'll be looking to Goldman Sachs, for example, despite railing against them while seeking his party's nomination, even going so far as to hire one of their most illustrious alums, Steven Mnunchin, "who made his fortune at Goldman Sachs, worked for a firm funded by George Soros, and donated to Hillary Clinton" according to the New York Times' Dealbook.

Despite what Mr. Mnuchin said was a personal friendship of 15 years, Mr. Trump has attacked both Mr. Mnuchin's investment company -- suing it in 2008 over a building deal -- as well as Goldman Sachs, the Democratic Party and other institutions Mr. Mnuchin has supported.

In a telephone interview Monday, Mr. Mnuchin emphasized the friendship part of the equation. "I was there at the beginning when he decided to run for president, and I've been a supporter and quiet adviser behind the scenes to him," he explained. The day after Mr. Trump won the New York primary, Mr. Trump called Mr. Mnuchin and offered him the job. "I told him on the spot I would," he said.

Trump is even tapping into the Republican National Committee's fund-raising apparatus, having very little of his own, to start raising what he predicts may be a $1.5b campaign.

Donald J. Trump took steps to appropriate much of the Republican National Committee's financial and political infrastructure for his presidential campaign on Monday, amid signs that he and the party would lag dangerously behind the Democrats in raising money for the general election.

Mr. Trump, who by the end of March had spent around $40 million of his fortune on the primaries, has said that he may need as much as $1.5 billion for the fall campaign, but that he will seek to raise it from donors rather than continue to self-finance.

But Mr. Trump has no fund-raising apparatus to resort to, no network of prolific bundlers to call upon, and little known experience with the type of marathon, one-on-one serial salesmanship and solicitousness that raising so much money is likely to require -- even if individuals can contribute up to the current limit of $334,000 at a time to the party. And he has to do it all in six months, with a deeply divided party that is still absorbing the fact that Mr. Trump is its standard-bearer.

This is having predictable effects as the Koch Brothers, Mark Holden, chairman of the Freedom Partners Chamber of Commerce, one of the Koch network's main umbrella groups, Paul Singer, the billionaire financier who had backed Senator Marco Rubio of Florida, have made it clear they are deeply dissatisfied with Trump's anti-Wall Street, anti-rich populist message and will not be supporting his campaign without a significant change, if not reversal, of his rhetoric and policies.

That reversal may already be coming.

Trump, who originally posted on his website a plan for the deepest tax cuts to the wealthy of any Republican candidate, then very recently backtracked on his pledge to cut taxes on the rich by saying "On my plan they're going down. But by the time it's negotiated, they'll go up," back-backtracked on that statement by saying ""I'm not talking about increasing from this point. I'm talking about increasing from my tax proposal." Oh, right.

Trump, who is variously worth, according to him, $9b, or just half that by other estimates, has said he doesn't want to sell "a couple of buildings" to self-finance the rest of his campaign. He will now have to go to the alter of billionaires even more billionairish than him, and they won't be writing checks easily, and not without the kinds of promises men - and with his track record with women, it will be mostly men - like them have come to expect in the corrupt political system Trump's base has rightly railed against. What will they do when they discover their standard-bearer is part of that system after all?

Related Topic(s): Billionaires; Donald Trump Lies; Donald Trump Supporters; Republican; Trump Campaign; Trump Strategist; Trump Tax Plan, Add Tags
Add to My Group(s)
Go To Commenting
The views expressed herein are the sole responsibility of the author and do not necessarily reflect those of this website or its editors.