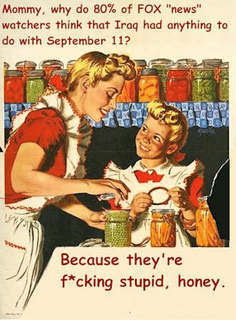 (Image by Unknown Owner)   Details   DMCA
While the last six months have been the worst of times, they have also been, in a very real and undeniable way, the best of times as well. Of course I am speaking of the utter implosion of the party that used to be known as "the party of Lincoln". Yesterday marked the one-hundred and forty-fourth anniversary of Abraham Lincoln's death. It's not too much of a stretch of the imagination to hypothesize that were he to come back to earth today, he would not only fail to recognize his party, he would be ashamed and embarrassed to have his good name associated with it.

What we have here is your classic good news/bad news scenario....

Good news: The GOP is going down.

Bad news: They are determined to bring the rest of the country down with them.

It really is kind of funny, isn't it? Dark comedy at it's finest. It could have been written by Paddy Chayefsky. Like a wanted felon knows damned well he is within minutes of having his cover blown, the Right Wing extremists who have dominated America's political dialogue for almost three decades, are resorting to desperation tactics of the most deplorable (and entertaining) kind.

Here's their problem: They know that the insane, "trickle down", voodoo economics of the "Reagan Revolution" have been exposed for all time and eternity to be nothing better than a two-bit scam. In order for them to survive politically, it is essential that they do everything humanly possible to ensure that President Obama's effort to save the American economy - and, thus, the American people - is a complete, disastrous failure. So, what to do? That's easy! Divide, distort and distract! It's the good old, tried and true, Karl Rove theory of statecraft.

This was one of the most idiotic publicity stunts I think I've ever witnessed. This "grass roots movement" (which in reality was cooked up by the Republican National Committee and promoted by the FOX Noise Corporation) was a pathetic effort to stage a nationwide demonstration against the Obama administration's tax policies. The problem is, most of the fools they were able to sucker into taking part in this silly event are people whose taxes won't be raised one blessed cent! How many times do these knuckleheads have to be informed that the only people who are going to be paying more in taxes under the Obama plan are those who make in excess of $200,000 a year? Has any one of these jackasses figured out that they will be paying less to the federal government than they paid under George W. Bush? What the hell is the matter with these people?

And then, just when you thought the situation couldn't possibly get any weirder, there was Texas governor, Rick "Good Hair" Perry, telling a rally of screaming nincompoops that the Lone Star State had the constitutional right to secede from the union.

NOTE TO THE GOVERNOR:
You just might want to rethink this one, pardner. Between you, me and the lamp post, there are a whole heck of a lot of people who think Texas secession would be nifty idea. It's a movement of opinion that is growing by the hour. Governor Perry, although yours is the state that gave us Molly Ivins, Bill Moyers, Kinky Freidman and the Barras family of Port Arthur (my first cousins on my mother's side), it is also the state that gave us Phil Gramm, George W. Bush, Tom Delay - and you. My advice? Don't go there. Don't even think about going there. As someone much smarter than I once opined, "Be careful what you wish for."

Desperate times call for desperate measures - and if there is one thing that is patently obvious to anyone bothering to pay attention, it is that these knuckleheads are very desperate indeed. Their only option at this late stage in the game is scaring the heck out of the American people. They're even calling Barack Obama "the most polarizing president in history." This at a time when his approval ratings are somewhere in the mid sixties. Listening to them jabber on, like magpies on a bad acid binge, you would think that Bush's eight year reign of divisive, reactionary insanity never even happened. Yeah! That's the ticket! It was all just a bad dream. Go back to sleep.

In the midst of all of this nonsense is the spectacle of the main contenders for the GOP nomination in 2012: Sarah Palin, Bobby Jindal, Tim Pawlenty - all of them governors - who are saying that they will refuse to accept the government's stimulus money in order to appease the small government base of their increasingly irrelevant party. Forget the fact that to refuse that money would consign their constituency to needless suffering and despair - Oh, just forget all of that stuff, you crybabies! The only things that matter to these despicable nitwits are their ambitions - Screw the people.

And while we're on the subject of irrelevance, is there anyone out there who seriously believes that the recent soap opera involving her daughter's ex-boyfriend has rendered Sarah Palin damaged goods? Does anybody really think that no political party in their right mind would would nominate such an imbecilic woman as their standard bearer? If it is your opinion that Governor Palin is a pathetic, stuck-in-the-tundra has-been whose best days are behind her , you're giving way-too-much credit to GOP standards.
Just look at the intellectual afflictions of every one of their nominees going back twenty-nine years. She's made to order! They can't just nominate another white guy to run against President Obama three years from now. They have to choose a woman or a non-white man. The most qualified (barely) person among their ranks is Mitt Romney. The only problem is the fact that the reactionaries and religious bigots who control that party will never nominate a Mormon. Barring a miracle (or the unthinkable - Dear Lord, keep him safe) it'll be Palin or Jindal (or Palin/Jindal) in 2012. Count on it.

And then there are the revisionists. They're out there in droves; the ones who are now in the process of making a futile and pathetic attempt to rewrite history by telling us (with faces as straight as a two-by-four, I swear!) that twenty-five years in the future will find historians remembering Bush as the greatest president in American history. These are the people whom I really pity! It reminds me of the story of the farmer who came across a young boy digging through a huge pile of horse manure with his bare hands. When the puzzled farmer asked the boy what the hell he was doing, the poor kid replied, "There's got to be a pony in here somewhere!"

"THERE'S GOT TO BE A PONY IN HERE SOMEWHERE."