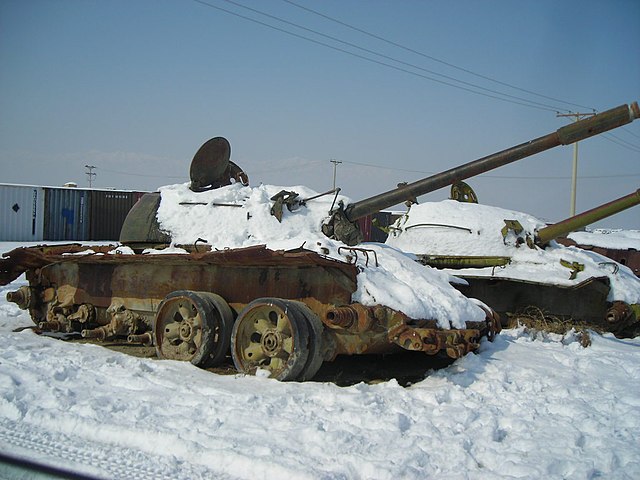 Russian Tanks covered with snow seen in Kabul are the left overs from the Soviet Union's Great Game in Afghanistan. The tank in the fore ground is T-54 or a T-55 while the one in the background is a T-62 as evidenced by the the barrel and the shape of th
(Image by (From Wikimedia) Chopin-Ate-Liszt!, Author: Chopin-Ate-Liszt!)   Details   Source   DMCA

The BBC on its website recently carried an article titled "The Great Game in Afghanistan". The British are familiar with the term and are aware of its implications.

Actually, nothing has changed as Afghanistan remains at the centre of attention for the great powers. Ironically, these are terms coined by the imperial powers and still find resonance in the lexicon of the 21st century. That said, one does need to explain the new geo-political context of renewed Russian interest in Afghanistan.

But a minor digression is in order to further contextualize the situation. Recently, Pak Army Chief, Gen. Qamar Bajwa, made a telephone call to Afghan President Ashraf Ghani following a series of deadly bombings in Kabul and other key centres to condole the terrorist attacks that had left scores of people dead or wounded.

While the ISPR (Pak Army's media wing) release took the angle of Pakistan expressing its sympathies for the Afghan people, the read-out issued by the Afghan Presidential Palace took a completely different line. President Ghani thanked Gen. Bajwa for the call and said, "Those who claimed responsibility for carrying out these terrorist attacks live, operate freely and recruit people in Pakistan and no action is taken against them." Gen. Bajwa apparently "promised that such activities will not be repeated on the part of Pakistan".

Pakistan has undoubtedly been part of the great game since the Russians invaded Afghanistan in 1979. Today, they are faced with an Afghan Taliban that is no longer completely under their control, which is seen in Islamabad's inability to get the Taliban and its leadership to the negotiating table with the Afghan government in the last five years. Pakistan, however, has another indirect tool in its hands for propaganda. And it is ISIS/Daesh in Wilayat Khorasan (WK).

The WK was first announced in January 2015 by the ISIS central leadership in Raqqa, Syria. This group in Afghanistan was formed with elements of the TTP, which had broken away from the main faction under spokesperson Shahidullah Shahid. Subsequently, the Islamic Movement of Uzbekistan (IMU) joined hands with the ISIS in Afghanistan.

Interestingly, ISIS established a training camp in Farah province bordering Iran. Little wonder, Tehran got the jitters! To Iran's relief, however, ISIS/Daesh started its operations in the eastern provinces of Kunar and Nangarhar.

Now why on earth did they choose to begin their gambit from there? The reason is pretty simple. Every single organization that pledged allegiance to ISIS was of Pakistani origin, be it the break-away faction of the TTP, the SSP or the Pak Jundullah. Therefore, the fighting cadres who could be brought into effect were all based in Pakistan and it made sense for them to make their presence in eastern Afghanistan.

In fact, in 2015 reports indicated that some local Taliban leaders had joined the ISIS and were recruiting locals on their behalf. So one must see the ISIS in Afghanistan with twin purposes, one a training area for sending recruits to Iraq and Syria, and second a locally active loose groupings of militants and terrorists from Pakistan who have pledged allegiance to the mother ship in Raqqa.

Estimates of ISIS strength in Afghanistan vary from a couple of thousand to 7,000. The nature of the figure depends on who are counted in the lot. Over 2015 and 2016, the Afghan National Security Forces in conjunction with US and NATO troops carried out a number of operations against the ISIS, especially the IMU in the Eastern provinces, and claimed to have inflicted considerable damage to both man and material. The US asserted that their air strikes had reduced the ISIS presence in Nangarhar considerably.

Which brings us back to the great game again; why has Russia along with China and Pakistan claimed that the presence of Daesh in Afghanistan is a threat to regional security?

Let us not forget that Iran has been singing the same tune for quite a while. Combined with this is the narrative that Daesh is a bigger threat than the Taliban; the latter is currently in intense combat with the Afghan security forces in many provinces. Several reasons can be adduced for this.

Russia fears a backdoor entry of Afghan-based terrorists into its soft under- belly. For Pakistan, it is a perfect tool to give the Taliban legitimacy through the backdoor, wherein both China and Pakistan are willing to consider taking the Taliban out of the UN sanctions in exchange for talks and possible participation in the Ghani government.

A blogger since July 2008 James Duglous Crickton is a London based consultant working with a consultancy firm focusing on Asia, particularly South Asia and East Asia. Political Research is his functional focus area. While his interests are (more...)
Related Topic(s): Afghanistan Drawdown; Afghanistan War; Afghanistan Warlords; Army; Daesh; Great Game; Iran; Militants; NATO; Sanctions; (more...) Security; Syria; Taliban; Taliban; Taliban; Vladimir Putin, Add Tags  (less...)
Add to My Group(s)
Go To Commenting
The views expressed herein are the sole responsibility of the author and do not necessarily reflect those of this website or its editors.