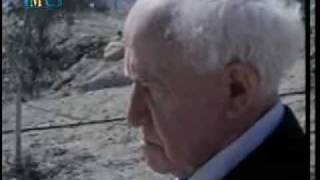 TWO DAYS ago, the State of Israel celebrated its 70th birthday. For days we heard about nothing else. Innumerable speeches full of platitudes. A huge festival of kitsch.

Everyone agreed: It was an historic moment, when David Ben-Gurion got up in a small hall in Tel Aviv and declared the foundation of the state.

Everybody still alive from then was asked this week: Where were you at that moment? What did you feel, when history knocked on the door?

WELL, I was alive. And I did not feel anything.

I was a soldier in the new army, which was not yet called "Israeli Defense Army" (its official name in Hebrew). My company had a small encampment of pup tents in Hulda, a kibbutz south of Tel Aviv.

We were to attack an Arab village called al-Kubab, near the town of Ramleh, that night. Stiff resistance was expected, and we were making all kinds of preparations, as soldiers do before a battle, when somebody ran up and shouted: "Quick, Ben-Gurion is declaring the state in the dining hall!" In the dining hall of the kibbutz was the only radio in the vicinity. Everyone ran there, including me.

A speech by a politician somewhere in Tel Aviv would make no difference whatsoever.

But I was curious about one detail: what would the new state be called? There had been several suggestions, and I wanted to know which one was accepted.

When I heard the word "Israel," I left the dining room and returned to cleaning my rifle.

The fierce battle, by the way, did not materialize. When we attacked the village from two sides, the inhabitants fled. We entered empty houses, with the food still warm on the tables. The inhabitants were never allowed to return.

The next morning my company was transferred to the south. The Egyptian army was entering Palestine, and we were to stop them before they reached Tel Aviv. But that is another story.

DAVID BEN-GURION, whose voice I had heard that afternoon on the radio, has by now become the national hero of all times, the man who created the State of Israel. This week a documentary about him was broadcast on television.

The director, Raviv Drucker, an excellent journalist, has produced a very good film. It shows Ben-Gurion as he really was, with all his good and bad points.

Related Topic(s): Birthday; David Ben-gurion; Israel; State; Zionism, Add Tags
Add to My Group(s)
Go To Commenting
The views expressed herein are the sole responsibility of the author and do not necessarily reflect those of this website or its editors.