“It is easy to ignore the storm if you look at the opposite horizon.  When the storm reaches your location there can be no more ignorance.”

I hate to tell you, but the storm has reached your location and it is a Category 5 hurricane. The levees are leaking. Ignore it at your own peril. The 6,000 sq ft McMansion buying, BMW leasing, $5 Starbucks latte drinking, granite countertop upgrading, home equity borrowing days are coming to an end. The American consumer will not go without a fight.

For the last seven years the American consumer has carried the weight of the world on its shoulders. This has been a heavy burden, but when you take steroids it doesn’t seem so heavy. The steroid of choice for the American consumer has been debt. We have utilized home equity loans, cash out refinancing, credit card debt, and auto loans to live above our means. It has been a fun ride, but the ride is over. We can’t get steroids from our dealer (banks) anymore. 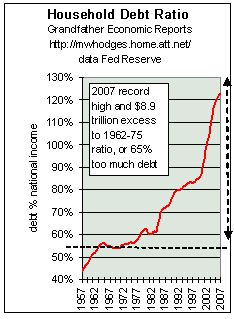 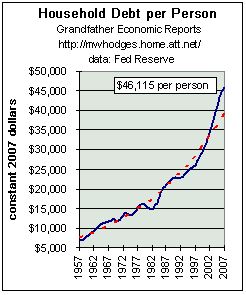 After examining these charts, it is clear to me that the tremendous prosperity that began during the Reagan years of the early 1980’s has been a false prosperity built upon easy credit. Household debt reached $13.8 trillion in 2007, with $10.5 trillion of that mortgage debt. The leading edge of the baby boomers turned 30 years of age in the late 1970’s, just as the usage of debt began to accelerate. Debt took off like a rocket ship after 9/11 with the President urging Americans to spend and Alan Greenspan lowering interest rates to 1%. Only in the bizzaro world of America in the last 7 years, while in the midst of 2 foreign wars, would a President urge his citizens to show their patriotism by buying cars and TVs. When did our priorities become so warped?

How Did I Get Here

-Talking Heads, David Byrne lyrics to Once in a Lifetime

By 2005 practically everyone had a large automobile and a beautiful house. By 2010 many of these people will be asking where is that large automobile and will realize as the sheriff escorts them out of their house that this is not my beautiful house. There is plenty of blame to go round for this predicament. According to Northern Trust economist Paul Kasriel, “We’re a what’s my monthly payment nation. The idea is to have my monthly payments as high as I can take. If you cut interest rates, I’ll get a bigger car.”  Major banks offer credit cards using your home equity as a way to pay everyday expenses like groceries, gas and clothes. Eating your house was never so easy. 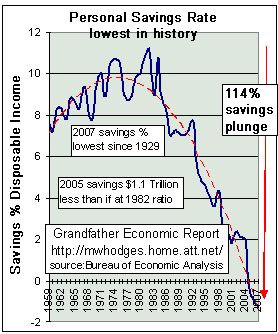 I have been accused by many of my friends and family as someone who sees the glass as half empty. I disagree with their assessment. I see the glass as it is. I find myself scratching my head trying to figure out why a society that always saved for a rainy day, consistently saving between 8% and 11% of their disposable income, now has a negative savings rate. I believe that keeping up with the Jones’ is the primary reason that Americans have taken on so much debt.

The authors of the book, Why Middle Class Mothers and Fathers Are Going Broke, contend that the costs of housing and a good education for their children are killing them. It now takes two incomes to provide what one income provided 30 years ago: a middle-class house in a safe neighborhood with a decent public school. Bidding wars erupted for homes in what are thought to be good school districts, making homes in those areas ever more expensive.

A phenomenon called “expenditure cascade” has occurred in the U.S. according to Cornell Professor Robert Frank. When top earners build large multi-million dollar mansions, they shift the frame of reference for those just below them on the income scale. Those people then respond by building bigger houses and so on down the food chain. This has resulted in families living on the edge. If one parent loses their job, it’s an easy slide into bankruptcy.

James Quinn is a senior director of strategic planning for a major university. James has held financial positions with a retailer, homebuilder and university in his 22-year career. Those positions included treasurer, controller, and head of (more...)
Related Topic(s): Bankruptcy; Banks; Consumer Debt; Consumer Goods And Services; Consumerism; Crashes; Government; Great_American_Depression; Losses; Money; (more...) Savings, Add Tags  (less...)
Add to My Group(s)
Go To Commenting
The views expressed herein are the sole responsibility of the author and do not necessarily reflect those of this website or its editors.