Humanity is facing testing times. Covid-19 has turned the world upside down, in terms of the way we live. There are profound changes in all walks of life. Though enforced due to circumstances, these changes have provided an opportunity to turn our preoccupation with the world, to look within ourselves. Naturally, one may ask - what is the use? Will it help to solve the problems of the world? Will introspection make the world a better place?

It is said that the whole universe lies within us and what we see outside is only a reflection of what is there inside. Hence, setting right what is within, sets right what is outside. Let us examine how this is possible. It is human nature to be 'self-centered', to take care of oneself and one's kith and kin. Generally speaking, as one's personality evolves, this care extends to one's community, nation and possibly humanity as a whole.

The expansion of the vision of an individual is influenced by the society in which he (or she) lives. When the individual is taught to be 'self-centered' right from childhood and grows up in such a milieu, his mind remains limited till he comes under the influence of people who have a wider vision. Parents, teachers, the books one reads or the religion one practices, all play a role in this process of transformation. After going through trials and tribulations and overcoming negative traits, one starts perceiving a higher truth, acquires deeper wisdom and tends to seek joy that lasts. 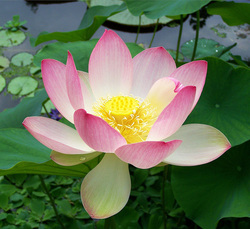 In other words, one is led towards one's hidden potential or the core of one's 'self'. This 'core self' or the 'Self' is synonymous with Soul and is also known as 'Atma', in Vedantic parlance. The 'Self' is 'pure consciousness', whose nature is 'truth-wisdom-bliss'. The core bliss is identical in every individual and therefore if one has the feeling of bliss within, he feels a connection with the rest of humanity.

The 'self' (or ego) is engaged in deriving happiness from the environment, family and society. The 'Self' or the 'core self' is blissful by itself and is reached by every individual during the stage of deep sleep, though subconsciously. The happiness felt by the 'self' is sustained by the ever-blissful 'Self' within, as evidenced by the serenity and freshness that one feels after a good night's sleep. But the individual tends to think that the happy state he enjoys after waking up comes from the environment he is currently in. On the other hand, a bad sleep can make the 'self' lose its taste of the bliss arising from the 'Self', resulting in a day that feels bad. Here, the cause for the bad day may be thought to be arising from what is there outside.

The 'Self' or 'core self' is the source, the underlying truth. The 'self' is downstream, the relative truth. Being connected with the 'Self' allows the 'self' to remain in touch with the source of bliss. Connected with inner bliss, wisdom and peace permeate the thoughts, words and deeds of the individual. Difficult situations are met with ease and problems resolved. When individuals in a society thus feel peace and behave wisely, it adds up to peace and harmony in the nation and in turn, the world.

Human beings have the natural tendency to move from the 'self' to the 'Self'. But with the development of science, everything is viewed analytically and logically. Excessive logic has virtually imprisoned human thought, making man forget the hidden potential of the 'Self'. The plethora of problems faced by the world and the endless struggle due to analytical mindset, would gradually resolve if the 'Self' is intuitively recognized and its healing and integrating capacity utilized. With the current pandemic scenario causing widespread stress, healing from within is especially important. Focus on becoming aware of the 'Self' within, is now more important than ever before.

When the Covid-19 pandemic ends, the world need not be worse off, with existing conflicts, divisions and inequalities further aggravated. Though untold misery may be gone through, humanity as a whole can become strengthened from within, if it moves towards becoming more 'Self-centered', instead of remaining 'self-centered'.

Related Topic(s): Conflict; Global Times; Happiness; Healing; Logic; Pandemic; Peace; SOUL; Self Improvement; Self-awareness; (more...) Self-development; Self-realization; Serenity; Sleep; Stress; Transformation; Truth; Wisdom, Add Tags  (less...)
Add to My Group(s)
Go To Commenting
The views expressed herein are the sole responsibility of the author and do not necessarily reflect those of this website or its editors.

Consciousness as the Basis of Disease and Disaster