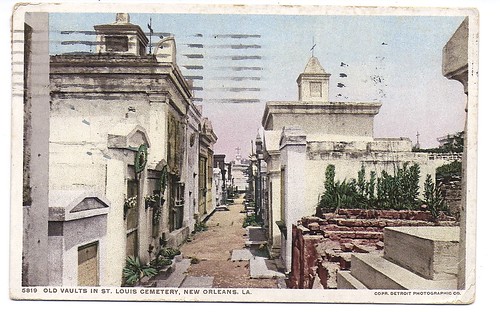 "Mamaw ran a card game in the back of Paw Paw's grocery, didn't much slip by her, had to get up real early to lay down that number five ace or lift a moon pie.

She didn't go in much for religion, but she had a strong feelin' of spiritual goin's on. Being raised up Catholic in Algiers around musicians and gamblers and voodoo folks and ghosts and all -- Mamaw seen lots and lots of ghosts. She said they never did scare her because they was the ghosts of bad people being called back up by the evil doins' of livin' folks, said they walked around here again to remind us how damn bad they was and to cut out the evil, whatever kind we're practicin'.

She would be grinnin' and shakin' her head at this new President fella, him callin' up all kind of ghosts: Al Capone and Slave Masters and that Italian fella Mussolini and them Mississippi Klan fellas and that Mexican General that kilt all them poor fellas at the Alamo and all other kinds of poor, lonely, sure enough bad ghosts. Yeah, Mamaw would sure be laughin' and shakin' her head at this new fella -- for he sure don't know that onest a fool calls them stinkin', bad people back up, they just move right on in, he be stuck with 'em..." From "The Ghosts of Algiers" By Franklin Cincinnatus

Related Topic(s): Donald Trump; Evil; Mussolini; Occult-Voodoo; Slavery; Spiritual; Story, Add Tags
Add to My Group(s)
Go To Commenting
The views expressed herein are the sole responsibility of the author and do not necessarily reflect those of this website or its editors.