On January 30, 1933, the then President of the German Weimar Republic (1919-1933), the World War I hero Field Marshall Paul von Hindenburg, as part of a deal with the non-Nazi Right-Wing political parties, appointed Adolf Hitler, the leader of the National Socialist German Workers (Nazi) Party, as Chancellor of Germany. Among other things, the Nazis begin moving very quickly against the trade unions and the two left-wing parties, the Socialists (SPD) and the Communists (KPD), arresting certain members of their leaderships and driving others into exile.

On February 27, the grand, historic, German Parliament building in Berlin, the Reichstag, is hit by a fire that would make it unusable until it was eventually restored after the end of World War II. Although it is not likely that the cause of the fire will ever be known for certain, most historians agree that it was most likely set at the direction of Hermann Goering, one of Hitler's principal deputies, either by a lone native of Holland, a mentally-handicapped member of the Communist Party, Marinus van der Lubbe, or a crew organized by Goering.

The story of "the cause" that was released almost immediately (within hours) by the Nazis was that the fire was set by van der Lubbe, as the result of a KPD plot. And the Nazis very quickly came up with a series of documents, later proved to be foregeries), that the "KPD Did It." (Actually, the KPD was as surprised by the Fire as was most everyone else.) The Reichstag conveniently happened to be decorated with highly flammable furniture, drapes, and wall-coverings. Apparently, a few matches did the trick. It happened that the KPD knew nothing of it and that the "incriminating documents" quickly produced by the Nazis were later proved to be forgeries. But that meant nothing at the time.

The Nazis quickly created a national hysteria over the "threat of the KPD and the SPD," lumped together as "the Marxists," to the "peace and tranquility of the German nation," to the "security of the German volk." To deal with "the Marxist threat," on Feb. 28, the day after the Fire, before there could be any kind of investigation beyond the Nazi declarations and proffered false documents, with Pres. Hindenburg's approval, and in accord with a provision of the post-World War I Weimar Republic's Constitution, all of the civil liberties protections in it were suspended. But this wasn't enough for the Nazis.

ADOLF HITLER, with Goering. Obviously smiling about how they used the Reichstag Fire to gain the Enabling Act.
(Image by WWIIHITLERTHIRDREICHHISTORY Thanks to Putschgirl.T)   Details   DMCA

On March 24, 1933, a Reichstag from which all the elected Communist deputies along with a number of the Socialist deputies had been purged, and in which many of the Centrist Deputies were totally intimidated (at the time of the vote, the Reichstag's temporary chamber was surrounded by members of the Nazis' private army, the Sturm Abteilung, the SA [or "Brownshirts"]), passed a Constitutional Amendment giving virtual dictatorial power to Hitler and his cabinet for a four-year period. It was called the Enabling Act.

In practice, it made Hitler into a dictator with no checks of any kind on his power (unless it were to come from another non-Constitutional power bloc, like the Army). It is fascinating to note that the sticklers for the "law" that they were, the Nazis, in what subsequently passed for the "Reichstag," dutifully renewed the Act every four years of the Hitlerite period. And so, the Reichstag Fire enabled the Nazi Party to gain something that would have been much more difficult for them to achieve without it: dictatorial control of the nation of Germany.

During the 2016 national U.S. election campaign then candidate Donald Trump frequently announced that "Muslims," in general, posed a grave threat to the security of the United States. He repeated these kinds of statements on a regular basis throughout the first year or so of his Presidency. Early on in his Presidency he issued a series of "travel bans" on persons coming from a selection of counties inhabited primarily by Muslims. Challenged by a variety of interest groups and brought before a variety of courts, the ban, widely referred to as the "Muslim Ban" because of the language Trump had used in supporting its creation and implementation, went through three versions.

It should be noted that the majority opinion upholding the ban actually quoted the President's language directly:

"For example, while a candidate on the campaign trail, the President published a 'Statement on Preventing Muslim Immigration' that called for a 'total and complete shutdown of Muslims entering the United States until our country's representatives can figure out what is going on.' App. 158. That statement remained on his campaign website until May 2017. Id., at 130--131. Then-candidate Trump also stated that 'Islam hates us' and asserted that the United States was 'having problems with Muslims coming into the country.' Id., at 120--121, 159. Shortly after being elected, when asked whether violence in Europe had affected his plans to 'ban Muslim immigration," the President replied, 'You know my plans. All along, I've been proven to be right.' Id., at 123."

The first two versions of the Ban were very quickly ruled unconstitutional by the lower Federal courts and set aside. The third version was sent up ultimate review by the U.S. Supreme Court, in a case entitled "Trump v. Hawaii." Although the plaintiffs' argument is complex, it comes down to the claim that what the Trump Administration enacted here was a ban in the entry of certain Muslim persons to the United States, just because they are Muslims. In making this claim, they relied on the President's own language, excerpts of which are quoted above. The majority of the Court, in a 5-4 decision, ruled in favor of the government. The opinion held that regardless of what the President had said in public, numerous times, about why he wanted the so-called "Travel Ban," that is to keep "Muslims" out of the country, since A) that language did not appear in the regulation and B) the Administration claimed that the ban had been put in place because of major concerns with national security, given the President's broad authority in that area, it had to be upheld. 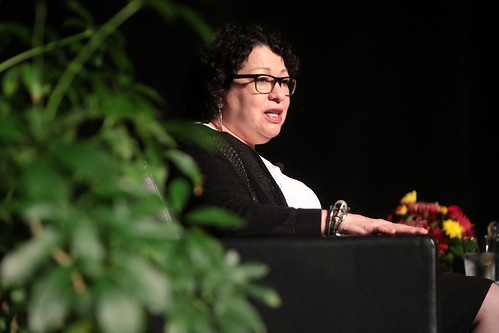 In an impassioned dissent, Justice J. Sotomayor, essentially said "no, in this case, precisely because of the language the President used repeatedly, the 'national security' claim is bogus. Quoting from her:

"The First Amendment stands as a bulwark against official religious prejudice and embodies our Nation's deep commitment to religious plurality and tolerance. That constitutional promise is why, "[f]or centuries now, people have come to this country from every corner of the world to share in the blessing of religious freedom." Town of Greece v. Galloway, 572 U. S., at ___ (KAGAN, J., dissenting) (slip op., at 1). Instead of vindicating those principles, today's decision tosses them aside. In holding that the First Amendment gives way to an executive policy that a reasonable observer would view as motivated by animus against Muslims, the majority opinion upends this Court's precedent, repeats tragic mistakes of the past, and denies countless individuals the fundamental right of religious liberty." [Emphasis added.]

Steven Jonas, MD, MPH, MS is a Professor Emeritus of Preventive Medicine at StonyBrookMedicine (NY) and author/co-author/editor/co-editor of over 35 books. In addition to his position on OpEdNews as a "Trusted Author," he is a Senior Editor, (more...)
Related Topic(s): Dangerous; Far-right; Fire; Hitler; McConnell-Mitch; Muslim; Muslims; Nazis; President; Security; (more...) Unconstitutional, Add Tags  (less...)
Add to My Group(s)
Go To Commenting
The views expressed herein are the sole responsibility of the author and do not necessarily reflect those of this website or its editors.