Click Here to Remove All Ads
Source: The Guardian
The shockingly rapid and radical collapse of the anti-gay framework demonstrates the baselessness of defeatism 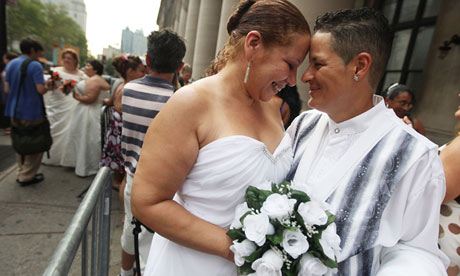 (Image by Unknown Owner)   Details   DMCA
A couple wait in line to get married in New York, but the US government continues to deny them equal marriage benefits under a law being contested before the Supreme Court Photograph: Mario Tama/Getty Images

The US Supreme Court this morning is hearing oral argument in two cases challenging the constitutionality of laws that discriminate against same-sex couples. It is expected that the Court will at least strike down the Defense of Marriage Act, as multiple lower courts have done, on the ground that it denies equal government benefits to same-sex couples (such as immigration rights).

Over the past two weeks, numerous national Democratic politicians, led by Hillary Clinton and joined by other centrist to conservative senators, announced that they have changed their minds and now support marriage equality, a move tellingly perceived as an attempt to get on "the right side of history." All of that was preceded by a reliably right-wing GOP Senator, Rob Portman, doing the same by citing his gay son. Marriage equality is a position the US president and his party formally endorse, and polls continue to show dramatic increases in public support to the point where it is now a position affirmed by a large majority of Americans. It's conventional wisdom that national gay marriage is inevitable; the tipping point has clearly been reached.

It really is a bit shocking how quickly gay marriage transformed from being a fringe, politically toxic position just a few years ago to a virtual piety that must be affirmed in decent company. Whenever I write or speak about any of the issues on which I focus, I always emphasize that a posture of defeatism -- which is a form of learned impotence: a belief that meaningful change is impossible -- is misguided. This demonstrates why that is true: even the most ossified biases and entrenched institutional injustices can be subverted -- if the necessary passion and will are summoned and the right strategies found.

Related Topic(s): Anti-gay; LGBT; Marriage Civil Unions; Marriage Equality; Political Values, Add Tags
Add to My Group(s)
Go To Commenting
The views expressed herein are the sole responsibility of the author and do not necessarily reflect those of this website or its editors.