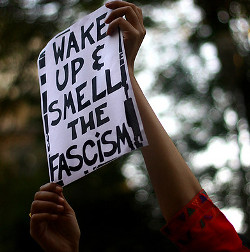 There is much consternation today around why so many Bernie Sanders' supporters will not vote for Hillary Clinton. I write the following to clarify and explain this reticence.

When Elizabeth Warren says the system is rigged she is correct--it isn't democracy. It is The American Fascist State. This state, I believe, has two arms, a right arm and a left arm both of which serve the interests of the one fascist body.

It is important to note that 'our' fascism, Americas', is different from that of Nazi Germany and Mussolinis' Italy in that ours is undeclared fascism. Elsewhere the fascist state has an obvious strongman and if a citizen complains there would be a knock on their door. Americas' undeclared fascism hides behind the illusion of democracy and if a citizen complains about perceived fascist behavior by the state he is told to vote harder, vote differently, vote more often--it is your fault!

The critical device used to maintain the illusion of democracy by those who run the fascist state is that they mandate the two arms of the state, the two parties, engage in conflict over wedge issues and, however resolved, those conflicts will leave the power and structure of the fascist state intact.

These wedge issues are a wonderfully effective shell game diverting attention away from who really holds power. These issues are ingenious creations in that they affect peoples lives and help determine which of the two arms of The American Fascist State we vote for. The choice we make matters little to the real power structure of this nation.

So what is left to say? Bernie Sanders was the only candidate who confronted the power of the fascist state and Hillary Clinton is the poster girl for the left arm of this state. Sanders supporters may not express their concerns in just this way but they know what "rigged" means and feel like retching when told they must vote for Hillary, a woman who will promote and maintain the American Fascist State.

Related Topic(s): Democracy; Fascism; Illusion; Mussolini; State; Vote By Mail; Vote Hope; Vote Suppression; Vote Your Conscience; Voter Fraud, Add Tags
Add to My Group(s)
Go To Commenting
The views expressed herein are the sole responsibility of the author and do not necessarily reflect those of this website or its editors.