Can war be far behind? O, I hope not.

I've burned so many bras and draft cards

dodging bullets in order to be free

on social, all my friends want to be like me

what they don't get is my deeply committed

some say straitjacketed sense of irony

f*ck the Russkies and their Lost in Sputnik ways

I just want to sleep late into the mourning

and never answer the whistle call of the tragedienne

although I recognize that "men" will be men

A little comical chaos is called for, Hang Ten!

of historical materialism, Lenin as the Holy See,

yawning when I pulled out Hegel beachside with a tan

I always wondered who was in charge of the nitwitted

platoon of middles lording over the working. A surrealist tyranny.

What became of their Jerry Rubinized hashish haze?

At the funeral Abbie sent a lookalike to the memory porning;

Abbie was underground; O, I miss those days of simplicity, Amen.

Instant karma will gitcha gitcha, ya gotta earn your zen.

Nobody really cares so long as there's CNN

to buffer our blues, to keep us apart. Who shot

will willfully speculate, unable to see

that it makes no difference to sweet liberty,

who holds that torch high and has a delectable can

of peaches in her other hand. I'm besmitted

moving through fields of swashbuckling gays

like some turkey through the corn, as Taj sez.

I avoid intellectuals, and other militant groups,

Let's face it: we treat Blacks, at best, as buskers: Here's ten

cents or dollars or pocket change thoughts of commiseration -- again. 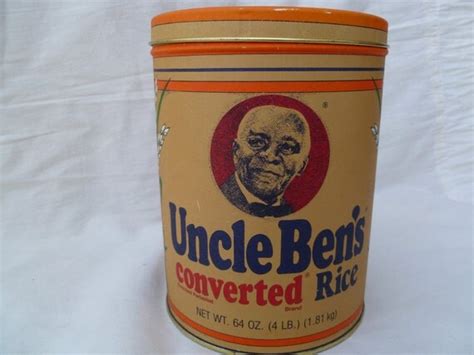 F*ck it. If we can "give" them back Hong Kong, then

let them have Taiwan, and toss in Korea, too: We fought

for nothing there -- Hot Lips and M.A.S.H wards

or care that Kim was once a hero, fought the hated Japanni

who occupied and raped and razed the very idea of "Korean,"

in a turf war of goons. And they say: crime never pays.

When the Brits returned Hong Kong, there was no largesse.

Opium had been forced on the closed culture dupes,

who succumbed to collegial occidental empires. No adorning.

If you let it, the spin will sail you beyond your ken

and when the rice won't convert, you'll say, Hey, what's up with Uncle Ben?

Unless, of course, you just don't give a jot.

Caught up in avatar tweets with your emoji pards.

To be Black, from a white POV, is an intolerable indignity

reflected in their eyes, as the bong is passed, for you to see.

When Black Lives Matter, we'll matter, too. I can

see a day, if I squint, when freedom's retrofitted.

Reparations could not begin to end the days

of auction blocks and separations. There's no redress

for died-in-the-wool white supremacy, their loopy-loops

of logic that come on like summer storms without warning.

Maybe we should CRISPR out hate, make us all mocha. That's when

we won't need to say Black Lives Matter anymore with a pen. 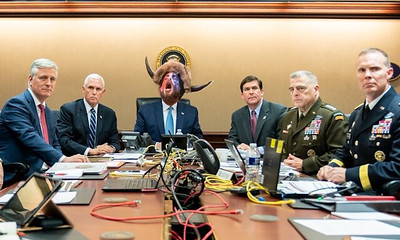 If Jan 6 taught you anything, then you're men-

tally ill, see a doctor if you begin to feel like a bot --

opium's the opium of the people, and of some bards.

What were they thinking with horns and the Disney twee?

or a mermaid you point to in a tank then served up for you to glaze.

O, what will we ever do with our desires? But I digress.

What say we go outside and shoot some hoops?

Dylan said you're either unraised dead or busy with reborning.

Now, had they stolen the oversized inside trading bra from the jungle hen 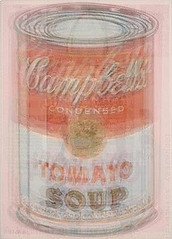 O, the Internet is a great thing for sharing things. But isn't open.

Are you a thing? Tick the box. Prove that you are not.

We are not our brother's keepers. We are not guards.

It's an "accident" that Facebook has our family tree:

I had no idea I was related to the late great Mother Machree.

But it's a battleground for hearts and minds. Like C-Span.

It attracts high brows, knit-brows, and the nitwitted.

I'm told by 'tars I trust the Internet has no sovereignty.

until their spirits are Campbell's soupçon, minds homogenized goops

and we spend our lives eating kibble, and dry-hump in lovelorning.

The smart TV is in the stupid den.

And there I'll sit on the couch until about eleven.

Don't know who Assange thought he was, but he's not American

and had no right to reveal all our secrets -- the lot!

So, we're savages when no one's looking. Our values, junkyards.

Our tropes as deep as the words uttered at a spilling bee.

But Way Down Under Australia's not exactly Dapper Dan.

The wrong look or word and you're jumped, lamb-basted and out-spitted.

Snowden's another one. Oliver Stone has him reading Ayn Rand. How Funny.

but there's something about the guy that says to me, 'Chess.'

I mean, are we really all living in free-range chicken coops

when we check out unctuous girly pics so early in the morning?

One day Meta enforcers will judge us through a Timeline len,

and after they snuff us out will zoom off in a Mercedes-Ben. 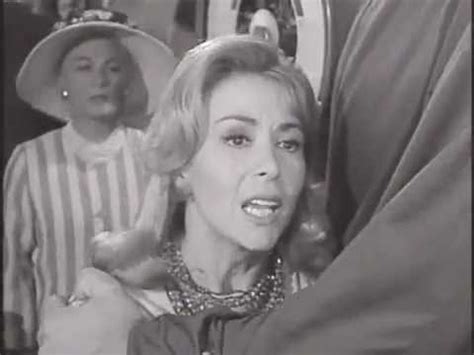 It's A Cookbook!
(Image by Public Domain)   Details   DMCA

I read somewhere that if not for gain-of-function

humans would have no consciousness, our brains just quantum snot

that aliens cracked up over, until they pitied our hards-

d, and charged other aliens an admission fee

when what we got up to was Sufi dervishes from Iran --

all over the galaxy little fungible green men thumbed and twitted,

thinking Man was the sun lit Beacon, and they waxed siren-y,

driven like Odyssey sailors to their dooms by the lit-up rays,

and saw their aching questions finally answered. But guess

what? They discovered it's a cookbook! And they were porky poops

and dumplings absorbed by our desire. 'Dyss killed himself without warning.

And after that, here we are, sipping pandemic tea, real men,

going on about our origins and the first Assault-and-Battery back then.

In the hivemind ahead we'll be meurons in a piggy pen

lost in the space between our ears, lams that time forgot

suffering from obese infirmities, swilling down the sweets and lards

returned at last to the wide open Serengeti

marking our path with an occasional pee,

singing "What A Marvel Is Man," with a Hamlet tan,

but feeling, nervously, that we've been utterly bullshitted,

a future of predators, commie capitalists, and spays.

You can try going from Bradley to Chelsea in a tip-toe dress,

but, boy, when you're in hot water, the gods have golden scoops

and you could get slurpy-swackled down without advance warning.

Well, I don't know. I consult the Tao. Buy yarrows from Dr. Chen.

But this bird's not going anywhere, unlike the throaty kunilingus, aka the wren,

The Singularity is said to lack only human mien

We fear the AIs won't get past our civilization's rot

past Bezos's mirrors or the privileged chards

We keep looking for the Lucy link, but we are the Eden tree

to the new Adams (alright, and Eves), to be and not to be

old dreggy wine refiltered into carafes at the Gallo refinery

days of wine and roses and monster tears, days

sweeter than the bitter wine of years should be. Can you guess

which of them is a 'borg, which a psychopath? Note they hang out in groups

Who knew that Man was a closet Machine, Barbie and Ken 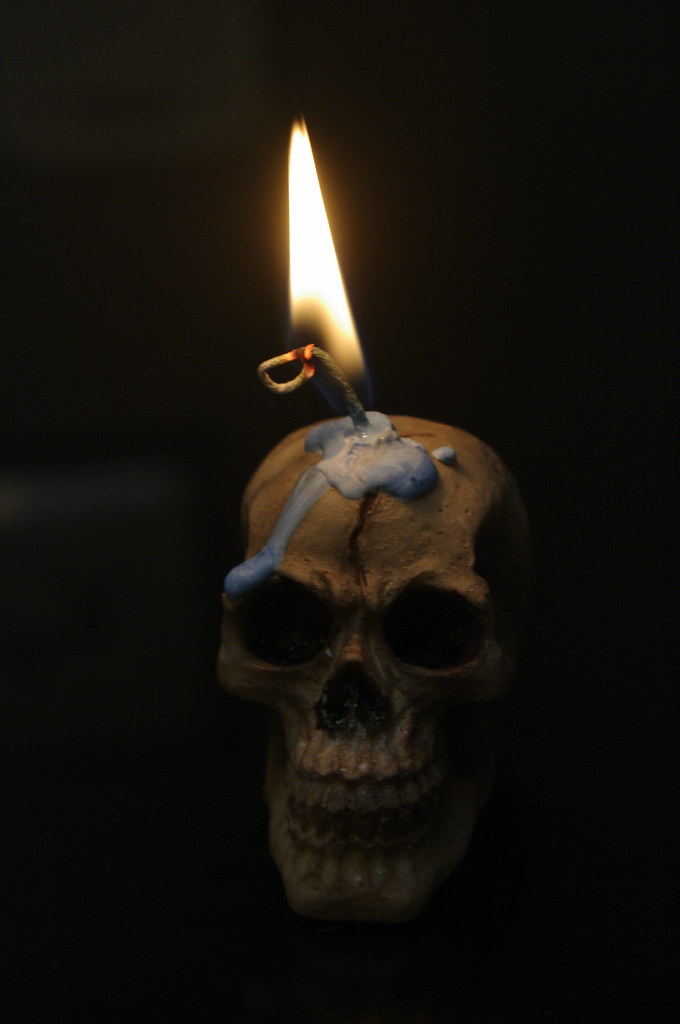 'blow your candle out'
(Image by Vanessa Pike-Russell)   Details   DMCA

"You want your cake and eat it too," they cliche on postcards

they send themselves. "You'll come with We

so we can blow your fuckin candles out, see?"

And there he sits all discombobulated, our Stan.

Birthday boy's led away for the readjustment. What a titted

pretty that he must know such wrath and metagnomy.

The enforcers are there for our good, to chase the errant yen

before we become conflicted, minds all angry Phnom Penh 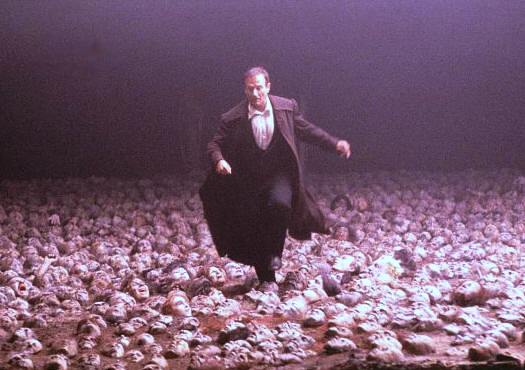 still from What Dreams May Come
(Image by Polygram)   Details   DMCA

our overlapping concentric circles, lines drawn from dot to dot,

our high maintenance bodies freed from their prison yards

who after kissing enough ass becomes a New Man parolee

who turns his back on recidivism and kicks the can can

forever. Now, where were we before I so rudely lit-critted?

I dream of being a panpsychist afloat in an ion sea

with a consciousness greater than me, halcyon days

Of course, opium provides the same thrill. "She Stoops

To Conquer" playing on the jukebox like a memory of the horning.

Well, a One Mind world without "me" in it's fine by you, lumpen;

Pol Pot felt the same: dummy up or dummy down, fist pumpin' 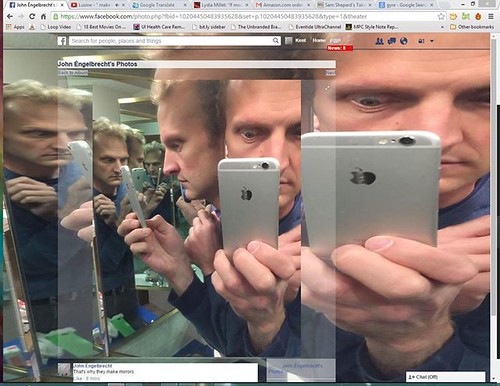 The real Real will come when multiverses hen

out galaxies like there's no tomorrow, and long sought

each an infinite closed-circuit of potentiality

realized in that Heisenberg moment you see

Quinn the Eskimo's mushed dog-sled approaching with "his" Plan --

a beau geste only as good as the gaze that time has permitted.

I'll be hanging down at the river by the winery

while blue angels with harpsichords impress

until the last light of eternity's adjourning.

We learn in the end that we are just instances, snowflake men

no two alike yet the same, lost, at last, in the blizzard again.

John Reads His SuperSonnet below! Are you hyped?

Related Topic(s): Make America Great Again; The Daily Beast, Add Tags
Add to My Group(s)
Go To Commenting
The views expressed herein are the sole responsibility of the author and do not necessarily reflect those of this website or its editors.