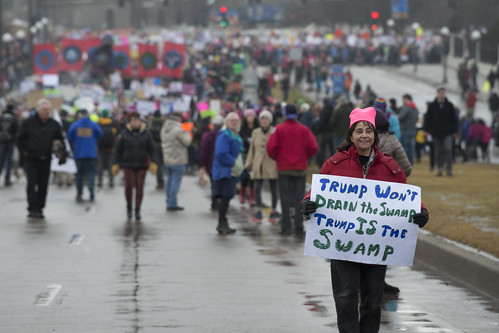 Trump the politician: We've seen a lot of the same Donald Trump we saw during the 2016 political campaign. Trump the Tweeter. Trump the media basher. Trump the braggart. Trump the liar...

There's no indication that Trump's move into the Oval Office has changed him. If anything, he seems more insular. So far, Trump's presidency has been characterized by scandals, such as the hiring and firing of Michael Flynn, and unprecedented disapproval. Trump has responded by retreating into the White House (or Mar Al Lago) and firing off angry tweets. (The worst job in Washington is being a member of the White House press corps.) The only time Trump seems happy is when he's giving his occasional campaign speech to the Trump faithful. (Who, so far, have stuck with him.)

Trump the manager. During the presidential campaign, we got a glimpse of Trump's managerial style: he burnt through three campaign managers and preferred the advice of his family -- particularly daughter Ivanka and son-in-law Jared -- to that of seasoned political operatives. Once in the White House, Trump's managerial shortcomings have become more obvious.

His primary criteria for hiring is not "can they do the job" but instead "are they loyal to me." He stuck with Michael Flynn way much longer than he should have because Flynn was loyal. Trump fired James Comey because Comey would not pledge loyalty to Trump (and because Comey would not reign in the investigation of Russian collusion in the election.) As a result of Trump's hiring bias, the White House is understaffed and those that stand by Trump's side are, for the most part, in over their heads. In general, the Trump Administration lags far behind other presidential administrations in the number of political appointees.

Trump voters like him because he seems authentic: a guy who "shoots from the hip" and is not harnessed by Washington convention. Trump shoots randomly. He has no impulse control. Day-to-day there's no coherent Trump strategy.

There's an old joke about Dwight Eisenhower's decision-making style: "He was most influenced by the last person he talked to." That seems an apt characterization for Trump's decision-making process: he seems to change his mind from day-to-day. For example, he was for the House Republican healthcare bill, then he was against it, and then he was for it. Trump disparaged China's economic policies until he met Xi Jinping, then he decided he liked China's policies. Trump will tell his communication staff to respond to an allegation in a certain manner and then he'll tweet something different. Trump has no consistency -- other than attacking the investigations into collusion with the Russians.

Trump the Party Leader: By virtue of his presidential victory, Trump is also the leader of the Republican Party. This means he sets the Party's legislative agenda and ensures that Republican politicians are elected in 2018.

Trump's legislative agenda is not going well. He promised to repeal Obamacare and, so far, this hasn't happened. He promised to build a wall along the Mexican border and this, to say the least, is off to a slow start.

Trump and Congressional leaders seem to have agreed on a four-step plan: repeal Obamacare, enact massive tax cuts, reduce entitlements, and pass an infrastructure bill. While all of these have been discussed, the relevant legislation has been slow to take form. Part of this is due to confusion in Congress, where Republican leaders in the House and Senate are not on the same page. But much of the responsibility lies with Trump. He's not a hands-on policy guy and hasn't shown interest in pushing anything other than a big concept, such as "a terrific healthcare plan."

Theoretically, Trump's other responsibility is to ensure that Republican continue their control of the House and Senate. Trump pays lip service to this job but in fact hasn't done much; he's a lone wolf and not a team player.

Trump the ideologue: When he was running for President, Trump didn't seem particularly ideological, except on the issue of immigration. He often struck a populist tone in his campaign speeches. Nonetheless, as President Trump has taken an extremely conservative stance.

Once Trump gained the support of Robert and Rebekah Mercer, who had been Cruz supporters, many predicted that he would adopt the Cruz position on cutting government spending by eliminating the Departments of Commerce, Education, Energy, Housing and Urban Development, and the Internal Revenue Service. (The Mercers are also in favor of eliminating the Environmental Protection Agency.)

Summary: Trump the leader is what we expected: a petulant showboat. Trump the manager is worse than we expected. Trump the Party leader is actually hurting the Republican Party. Unfortunately, Trump the ideologue threatens to do grievous harm to the environment and the least fortunate Americans.

Bob Burnett is a Berkeley writer. In a previous life he was one of the executive founders of Cisco Systems.
Related Topic(s): Agenda; Decision-making; Donald Trump Lies; Donald Trump Supporters; Four Horsemen Of The Apocalypse; Healthcare; Lies; Policy; Presidency; Republican; (more...) Scandal; Trump Cabinet; Trump Diplomacy; Trump Executive Order; Trump Foreign Policy; Trump Insults; Trump Mental State; Trump Presidency, Add Tags  (less...)
Add to My Group(s)
Go To Commenting
The views expressed herein are the sole responsibility of the author and do not necessarily reflect those of this website or its editors.