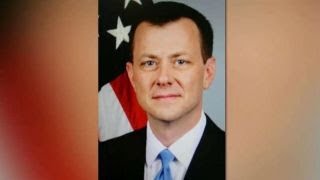 Peter Strzok, who served as a Deputy Assistant Director of the Federal Bureau of Investigation, second in command of counterintelligence.
(Image by YouTube, Channel: Fox Business)   Details   DMCA
>

The disclosure of fiercely anti-Trump text messages between two romantically involved senior FBI officials who played key roles in the early Russia-gate inquiry has turned the supposed Russian-election-meddling "scandal" into its own scandal, by providing evidence that some government investigators saw it as their duty to block or destroy Donald Trump's presidency.

As much as the U.S. mainstream media has mocked the idea that an American "deep state" exists and that it has maneuvered to remove Trump from office, the text messages between senior FBI counterintelligence official Peter Strzok and senior FBI lawyer Lisa Page reveal how two high-ranking members of the government's intelligence/legal bureaucracy saw their role as protecting the United States from an election that might elevate to the presidency someone as unfit as Trump.

In one Aug. 6, 2016 text exchange, Page told Strzok: "Maybe you're meant to stay where you are because you're meant to protect the country from that menace." At the end of that text, she sent Strzok a link to a David Brooks column in The New York Times, which concludes with the clarion call: "There comes a time when neutrality and laying low become dishonorable. If you're not in revolt, you're in cahoots. When this period and your name are mentioned, decades hence, your grandkids will look away in shame."

Apparently after reading that stirring advice, Strzok replied, "And of course I'll try and approach it that way. I just know it will be tough at times. I can protect our country at many levels, not sure if that helps."

At a House Judiciary Committee hearing on Wednesday, Rep. Jim Jordan, R-Ohio, criticized Strzok's boast that "I can protect our country at many levels." Jordan said: "this guy thought he was super-agent James Bond at the FBI [deciding] there's no way we can let the American people make Donald Trump the next president."

In the text messages, Strzok also expressed visceral contempt for working-class Trump voters, for instance, writing on Aug. 26, 2016, "Just went to a southern Virginia Walmart. I could SMELL the Trump support... it's scary real down here."

Another text message suggested that other senior government officials -- alarmed at the possibility of a Trump presidency -- joined the discussion. In an apparent reference to an August 2016 meeting with FBI Deputy Director Andrew McCabe, Strzok wrote to Page on Aug. 15, 2016, "I want to believe the path you threw out for consideration in Andy's office -- that there's no way he gets elected -- but I'm afraid we can't take that risk."

It's unclear what strategy these FBI officials were contemplating to ensure Trump's defeat, but the comments mesh with what an intelligence source told me after the 2016 election, that there was a plan among senior Obama administration officials to use the allegations about Russian meddling to block Trump's momentum with the voters and -- if elected -- to persuade members of the Electoral College to deny Trump a majority of votes and thus throw the selection of a new president into the House of Representatives under the rules of the Twelfth Amendment.

The scheme involved having some Democratic electors vote for former Secretary of State Colin Powell (which did happen), making him the third-place vote-getter in the Electoral College and thus eligible for selection by the House. But the plan fizzled when enough of Trump's electors stayed loyal to their candidate to officially make him President.

After that, Trump's opponents turned to the Russia-gate investigation as the vehicle to create the conditions for somehow nullifying the election, impeaching Trump, or at least weakening him sufficiently so he could not take steps to improve relations with Russia.

In one of her text messages to Strzok, Page made reference to a possible Watergate-style ouster of Trump, writing: "Bought all the president's men. Figure I needed to brush up on watergate."

As a key feature in this oust-Trump effort, Democrats have continued to lie by claiming that "all 17 U.S. intelligence agencies concurred" in the assessment that Russia hacked the Democratic emails last year on orders from President Vladimir Putin and then slipped them to WikiLeaks to undermine Hillary Clinton's campaign.

That canard was used in the early months of the Russia-gate imbroglio to silence any skepticism about the "hacking" accusation, and the falsehood was repeated again by a Democratic congressman during Wednesday's hearing of the House Judiciary Committee.

Related Topic(s): Anti-trump; Conflict; Investigation; Media; Russiagate; Wikileaks, Add Tags
Add to My Group(s)
Go To Commenting
The views expressed herein are the sole responsibility of the author and do not necessarily reflect those of this website or its editors.