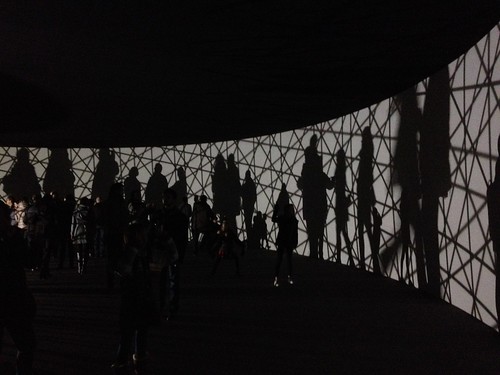 Poor Orpheus stuck in Margaritaville looking for his lost shaker of salt, when The Furies arrived like the Enforcers out of Hemingway's The Killers, with Lee Marvin, who you don't f*ck with. O. snorted one last line, and got brave, but he waited in vain: He fell asleep, knowing they'd have to chase him down into his circular dreams, and there would be hell to pay if they ever caught up with him.

If you recall that famous painting, Cafe of Broken Dreams, Marilyn, Bogie, James Dean, and Elvis serving up the Joe, each an isolated icon without human intertextuality, all went off cliffs in their own ways, causative rebellions, in free fall, 9/11s with two legs, taking with them some small part of our desire in their meltdowns, whose cumulative effect has left us hollowed out, sugar junkies, like postmod architectural charades, gutted.

What did Bogie expect? What did History expect? Of course, they had Paris when they were burning with desire -- he an alkie expat shrimp in elevator shoes talking glib gibberish, but poignant in such a way; and she an Archetype of Beauty, that some a**hole cast in Gaslight, would spend her war days playing Mary Mag the tender podiatrist, to Bogie's Jesus blues buoyed by Sam's masterful ivory tickles on the instrument of his trade, or she could go with Mersault, the anti-Vichy French rebel with a cause handsome as Errol Flynn in his prime, a Rocket Richard to bring a little highsticking to some gooned up Nazi noggins; Ideal Beauty inflating his ego now and then to keep him focussed, in smiles, the seed of a new breed of men who fight for godknowswhatreason because here we are again, disillusioned soldiers of the Endless War, our women slutted.

If I learned anything about honky tonk worlds it's that the piano needs a good tuning, probably the soundboard is cracked, we know that the player is, and the dames who crack chairs over your skull for the pleasure of your company expect a bouquet in the morning. If the plumbing's not working all hell will break loose. Marx brothers defenestrate, slaughterhouse caboose. (You'll read somewhere that those swinging censers that vaguely threaten with their holy smoke were invented because no one bathed back then in the prime of cathedral days. Pews. Father Mulligan couldn't handle it. Why have you forsaken and that kind of thing.) But only Rachmaninov could play my whorehouse blues. I really had it bad for that bimb.

When the darkness becomes the first morning's light and you turn and delight to see that she's still there. With that fresh morning light in her ancient hair. Even Ideal Fems get old. Like you should talk.

There should be a law against desire that burns past the last log like an afterimage that never quite fully fades and holds you in a suspense of resolution. What!? you squawk and throw a shoe, like that Iraqi journo who threw his boots at Bush and missed and was not shot but I heard was made mayor for his ballsy critique. Who needs such images, the feral moans of colognes faded back into forgotten pick-up lines she rejected anyway, walking from you, braless, and a sashay poopchute you saw as Plato's cave in which you were a slave to shadows.

I had a fantasy that nothing matters, if we allow the bullies to be reified and come crashing through our stained glass world that we worked so hard to build with genius minds we'll never see again. Have you sat quietly even once in a cathedral and taken in the shock and awe of strange beauty and the terror of bones told by this form and function exercise that screams in ecstasy even as it barely moves with its breath a single votive candle? And don't get me started on the Bach fugues. But maybe your cup of tea is Rachel Maddow's?

There's a quasimodo moron on my block who yells from day to night to day again, Who stole my chalk? [repeat]

It's catch as catch can. Feminists do the can-can. And what cans at Cannes. Can you believe it? I found the chalk. Now lissy up, here's my plan.

The AIs are here and we are avatars who talk.

The sages once passed on Meaning to us, if we studied hard and tickled them under the table,

Related Topic(s): A Dark Illimitable Ocean Without Bound; Americans Together; Create Change; Fiction; Fiction; Fiction; Flash Mob; Hot Flash; Internet Of Things; Microchip; (more...) Microsoft; Moral Coherence; Story Theory Language Structure, Add Tags  (less...)
Add to My Group(s)
Go To Commenting
The views expressed herein are the sole responsibility of the author and do not necessarily reflect those of this website or its editors.