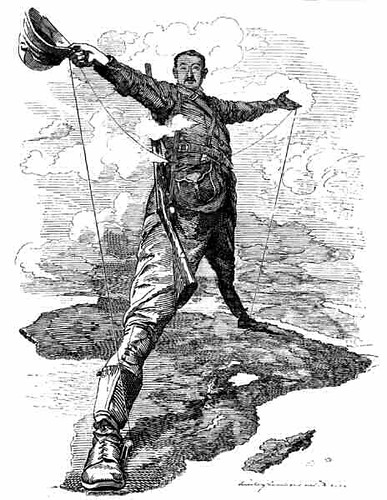 History is always written by the winners. When two cultures clash, the loser is obliterated, and the winner writes the history books--- books which glorify their own cause and disparage the conquered foe. As Napoleon once said, 'What is history, but a fable agreed upon?--- Professor Robert Langdon

The Decline of an Empire

Why did World War One happen? The conventional fable agreed upon begins on June 28, 1914 with the assassination of Austria's Archduke Ferdinand in Sarajevo. The aftermath of the assassination spiraled out of control. It was like an unstoppable train speeding down the tracks. Suddenly all of the Western powers were at war. When the armistice was signed on November 11, 1918 forty million people lay dead. Exactly five years to the day after the assassination of the Archduke, the Treaty of Versailles was signed. Germany alone accepts all the guilt for the war. The end.

In the 21st century the U.S. and its allies squandered their blood and treasure on never-ending criminal wars. Millions of people the U.S. slaughtered in West Asia are dismissed as "collateral damage". Meanwhile, China has been using its resources for development, and lifting millions of people out of poverty.

The U.S. Empire has been in a long decline for decades. More Americans are falling into poverty, and the U.S. has been steadily falling in the United Nations Index of Human Development. It currently ranks number 28th among developed countries. The index is a measure of infant mortality, healthcare, life expectancy, education, and per capita income. The U.S. infrastructure, such as road, rail and airports, public utilities, and the internet are behind other developed countries, too.

China's economy is expected to surpass the U.S. in 2028. Russia has also revitalized its economy in the last 20 years. Every advance that China and Russia make is propagandized by the U.S. as "aggression".

Instead of competing peacefully with China and Russia, the U.S. has engaged in a New Cold War. Each passing year the world grows closer to a Hot War. The Doomsday Clock of nuclear annihilations was at 14 minutes to midnight at the end of the Cold War. It is now at 100 seconds to Armageddon. That is the closest it has ever been. There is no effort in the U.S. to turn back the clock.

August 2014 was the centennial of The First World War. The year was a grim reminder, which momentarily gave people pause, and a slew of articles resulted. For instance, Graham Allison wrote an article that appeared in The Atlantic: Just How Likely Is Another World War? . Allison assessed the similarities and differences between 1914 and 2014. His conclusion was:

For the 'complacent' who live in what Gore Vidal labeled the 'United States of Amnesia', the similarities should serve as a vivid reminder that many of the reasons currently given for discounting threats of war did not prevent World War I.

Then Allison optimistically concluded that another world war is, "unlikely if statesmen in both the U.S. and China reflect on what happened a century ago." Does anybody see "wise statesmen" reflecting, or see much concern in the United States of Amnesia?

There is no viable anti-war liberal class in the U.S. demanding dialogue, diplomacy and compromise among nations. The U.S. has exited treaties, which were designed to prevent catastrophic wars. The U.S. has criminally abandoned international law and the United Nations Charter. Instead the U.S. has come up with its own "rules-based international order". International law is based on treaties among nations. The "rules" are diktats made in Washington and Brussels, imposed on the rest of the world by U.S. militarism.

In the unipolar world after the collapse of the Soviet Union, the U.S. did as it pleased. It ruled the air, land and seas. With the rise of China and Russia the U.S. does not compete peacefully, nor does it show any desire to. Diplomacy, negotiation and compromise are dirty words to U,S. warmongers, of which there are many.

International capitalism is not based on peaceful competition. Instead it is based on military power, financial blockades, blackmail, and might makes right. International capitalism is a system of imperialism, monopoly, and war. When an empire is challenged, it lashes out. Empires try to destroy their competitors. Empires project their own lust for power and world domination onto all competitors.

In the early 20th century the sun never set on the British Empire. Metaphorically, the sun started to set with the rise of Germany. The British saw a rising Germany as a threat to its goal of world domination.

The following essay summarizes how the British Empire set out to destroy Germany in 1902. It led to The Great War. The similarities of that era are frighteningly similar to the U.S. paranoia and hostility to a rising China and Russia today.

Related Topic(s): First World War; World War I; World War Three; World War Two, Add Tags
Add to My Group(s)
Go To Commenting
The views expressed herein are the sole responsibility of the author and do not necessarily reflect those of this website or its editors.