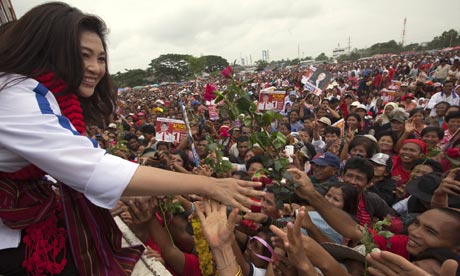 Ms. Yingluck Shinawatra has made it! Her landslide victory will bring her to the top job in Thai political history. Being the first woman to govern the country is surely not an easy job and she knows hard times lie ahead.

The sister of ousted PM Thaksin Shinawatra, has brought various interesting dimensions to contemporary Thai politics. Apart from being the (future) first female Prime Minister of Thailand (and 16th female PM in the World), Yingluck focuses on promoting populist policies to poor rural Thais. Obviously, her brother, Thaksin Shinawatra, was successful in promoting populist policies such as the war against drugs, 30-baht health scheme, and the One-Tambon-One-Product initiative. The majority of poor Thais seem to believe that such populist policies can improve their quality of living, although some economists, social policy analysts and health practitioners warn of their consequences.

With 92 per cent of votes counted, the Pheu Thai party had won 260 seats out of 500, well ahead of the Democrats with 163, according to the Election Commission. A landslide victory, nevertheless, may not be a sign that Thais aspire for Yingluck to govern Thailand. Some analysts say that Yingluck is a mere 'clone' of her brother. The majority of Thais still wish to bring back Thaksin and his populist policies because the Democrat Government has failed to deliver its promises to the people of Thailand.

As a successful business woman, she has been working in the telecommunication industry under the shadow of her brother. In her current role as the leader of the Pheu Thai party, it is commonly perceived she is acting on behalf of her brother. Most people believe that one of the key agendas is calling for an amnesty for Thaksin Shinawatra. Interestingly, she remains ambiguous when questioned on this issue.

Meanwhile, Ms Yingluck has been running a slick and brilliant campaign. She deserves credit for a conciliatory tone. She promises not to avenge the coup or to rush into pardoning. She also denies issues on conflicts with yellow-shirt supporters or her brother's opponents. She must realise she will inherit the nemeses of her brother no matter what.

There are doubts about her sincerity, worries about her inexperience and a real fear that her brother may overrule her and rush home after the election. Thaksin's return may probably be disastrous, taking the country back to the divide between the yellow and red shirt camps. Another potential risk is that Pheu Thai's spending promises prove ruinous; though with luck, Yingluck's voters may not realise that Thailand cannot afford her most extravagant promises. Some of her proposed projects and policies are grandiose, fuelling doubts over the Government's ability to manage and finance them.

Key questions that remain unanswered include (a) In her role as the leader, how long would the government last? and (b) How can the Government under her leadership survive a military intervention (or even a coup d'eta)? Like most developing nations in the world, political affairs in Thailand have long been influenced by the army. Having overthrown her brother in a coup, and backed the toppling of elected pro-Thaksin governments through parliamentary and legal manoeuvres, the army may not fully support a Pheu Thai victory. Some political analysts suggested Yingluck not rush to the debate on the future of her brother. What is more important for her and Pheu Thai is the short and long-term strategies to move Thailand beyond the past conflict.

Yingluck appears to be a charismatic and strong leader in the media, although a lot of Thais have started to question her ability to control some experienced politicians, and to form a government. In responding to the announcement of the victory for the Pheu Thai party, she stated,

''I will keep my promises to the people,''

''I don't want to say that Pheu Thai has won, but I am glad for the chance to work for the people."

''I will follow my heart and use my brain to help solve Thailand's problems.''

Thais are waiting to see if their first female Thai PM can follow her heart and step out of her brother's shadow.

Nattavud Pimpa is a senior lecturer in international management at Royal Melbourne Institute of Technology (RMIT University) in Australia. He is also on twitter.com/nattpimpa
Related Topic(s): Female Leaders; Political Elite; Thailand, Add Tags
Add to My Group(s)
Go To Commenting
The views expressed herein are the sole responsibility of the author and do not necessarily reflect those of this website or its editors.

Demise of International Education in Australia