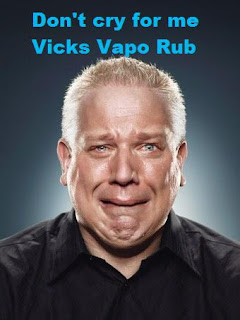 SHOCK!! Glenn Beck announced that his FOX News show is being canceled! It truly is the END OF THE WORLD!!

With a totally disingenuous statement (" Fox is one of the only places you will find truth"), Glenn Beck said goodbye to his blackboards and his cable TV viewers. But lest we feel sorry for The Beckster, we should look at the bigger picture: rosier than ever for Glenn Beck.

From The Hollywood Reporter:

Beck, who Forbes estimated made over $32 million last year (only $2 million of which was for the FNC show), insisted he was not making this change because he can make more money elsewhere. It is not, said Beck, "because it's good or bad for business but I think you, of all people, will truly get this, our only business is the business of freedom and our country at this time.

Yeah, right. Glenn Beck will still retain his daily radio show, his lecture/performance circuit and, of course, more free time to "write" books. He will also be doing "specials" for FOX.

Still, there will be a great wailing, ripping of garments, gnashing of teeth as conspiracy theorists (his biggest following) will somehow blame the show's demise on President Obama. Even I am a little sad to see such an incredible source of material (and mockery) go away. No doubt, the makers of Vicks Vapo-Rub will also shed a tear (sorry).  Certainly David Barton - Beck's all-American-Christian pseudo historian - will have to find another cable show to appear on (other than Pat Robertson's The 700 Club, of course). There will be articles about BB and AB - Before Beck and After Beck.

That this was an expected and calculated media move there is no doubt: ratings (relatively) tanked in the last year to the point that Beck couldn't have expected to be around very long: Uncle Rupert (Murdoch) liked him, but Uncle Rupert never shoved money down a rat hole, either. People speculated that Beck had gotten too full of himself calling together rallies and such, but for my money, I think Beck will welcome the relative quiet this will bring to his career. For all the show of being in touch with today's common man, Glenn Beck was and always will be for Glenn Beck.

Another indication that he's resigned in his FOX situation: his calm. People have gotten to know his mercurial tantrums, peppered by his overactive tear ducts. His deportment was dignified in his announcement - very unusual for a man who has ordered people off his radio show with bouts of screaming.

His macular dystrophy (disorder of the eyesight) might play into his acceptance of cancellation, since no one wants to see a blind pundit on TV. Knowing Beck, he might be able to play loss of eyesight into his persona. OK, the last is a bit cruel, but Beck has parlayed a lot about himself into media gold, even his Mormonism: it isn't easy to host people like David Barton, who think Mormonism is just a "cult." His new persona (and there will be one) may morph into the kind of character Rush Limbaugh wishes he had if he could emit more sincerity and compassion and if both would get him ratings. Limbaugh is wise in that he has always played to his core market, whereas Beck has been taking chances (e.g., his occasional lapse into being gay-friendly) and gone too far out in conspiracy theories.

Some Republicans may even be heaving a sigh of relief: Beck's forays into various ideologies have been a bit too fringe for them to hang their hat on and what they don't need right now is any more fringe candidates.

With his benign cancellation and his ability to work medias like radio, stage and print, Glenn Beck will still be around for a long time.

Rev. Dan Vojir is has been writing/blogging on religion and politics for the better part of ten years. A former radio talk show host (Strictly Books " Talk America Radio Network) and book publisher, Dan has connected with some of the most (more...)
Related Topic(s): Beck University; FOX NEWS; Glenn Beck; Media Distortion; Media Fake News; Media Radio; Media Right Wing; Media-News, Add Tags
Add to My Group(s)
Go To Commenting
The views expressed herein are the sole responsibility of the author and do not necessarily reflect those of this website or its editors.