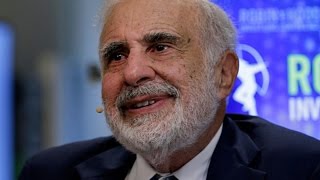 Icahn is not exactly a hardship case. According to Bloomberg's Billionaire Index, his net worth is $21.8 billion. Over the last four decades as a corporate raider, Icahn has pushed CEOs to cut payrolls, abandon their communities, and outsource jobs abroad in order to generate more money for him and other investers.

In 1985, after winning control of the now-defunct Trans World Airlines, Icahn stripped its assets, pocketed nearly $500 million in profits, and left the airline more than $500 million in debt. Former TWA chair C.E. Meyer Jr. called Icahn "one of the greediest men on earth."

No single person has done more to harm America's working class than Carl Icahn. Not surprisingly, Icahn was a Trump backer from the start, and has benefited immensely from Trump's presidency.

When Trump first talked with Scott Pruitt about running the EPA, Trump told Pruitt to meet with Icahn. As Icahn later recounted, "I told Donald that [Pruitt] is somebody who will do away with many of the problems at the EPA."

Trump then made Icahn his special regulatory adviser, until lawmakers raised concerns about potential conflicts of interest.

Icahn has found other ways to make money off the Trump presidency. Days before Trump announced hefty tariffs on foreign-made steel, Icahn sold off $31.3 million in stock he owned in the Manitowoc Company, a manufacturer of steel cranes. After Trump's announcement, the company's shares tumbled.

Icahn says he had no inside knowledge of Trump's move, but why should anyone believe him? The Trump presidency is awash in conflicts of interest, lies, payoffs to friends, insider deals, and utter disdain for the public.

Icahn's steel deal was chickenfeed relative to the billions he'll pocket courtesy of Trump's tax cut. Icahn is said to have spent $150 million lobbying for it, which makes it one of his best investments so far.

Meanwhile, real financial hardships are bearing down on Americans who are getting no help at all. Flint's water is still unsafe. Much of Puerto Rico is still in the dark. Last week, HUD Secretary Ben "Poverty-Is-A-State-Of-Mind" Carson proposed large rent increases for families receiving housing assistance, explaining that help to the poor "creates perverse consequences, such as discouraging these families from earning more money."

Rubbish. Low-income Americans are already working hard, many paying half their monthly incomes in rent.

The Trump administration is also allowing states to demand that Medicaid recipients work, although there's no evidence Medicaid deters people from working. In fact, many low-income Americans are able to work only because they have access to health care via Medicaid.

Trump and his enablers on Capitol Hill are proposing that people receiving food stamp work at least 20 hours a week. Yet over 40 million Americans -- including many children and disabled -- are already struggling with hunger, and food stamps average only $1.40 per person per meal.

Related Topic(s): Carl Icahn; Financial; Income Inequality; Trump Cruelty; Trump Tax Bonanza, Add Tags
Add to My Group(s)
Go To Commenting
The views expressed herein are the sole responsibility of the author and do not necessarily reflect those of this website or its editors.