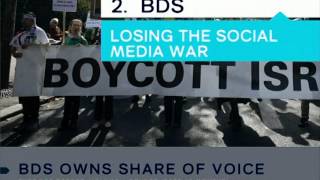 BDS stands for "Boycott, Divestment and Sanctions." The BDS Movement was the outcome of several events that shaped the Palestinian national struggle and international solidarity with the Palestinian people following the Second Uprising (Intifada) in 2000.

Building on a decades-long tradition of civil disobedience and popular resistance, and invigorated by growing international solidarity with the Palestinian struggle as exhibited in the World Conference against Racism in Durban, South Africa in 2001, Palestinians moved into action.

In 2004, the Palestinian Campaign for the Academic and Cultural Boycott of Israel (PACBI) called for the boycott of Israeli government and academic institutions for their direct contributions to the military occupation and subjugation of the Palestinian people. This was followed in 2005 by a sweeping call for boycott made by 170 Palestinian civil society organizations.

1 -- What is the academic boycott?

PACBI has served as a medium through which the Palestinian point of view is articulated and presented to international audiences through the use of media, academic and cultural platforms. Because of its continued efforts and mobilization since 2004, many universities, teachers' unions, student groups and artists around the world have endorsed BDS and spoken out in support of the movement.

In the absence of any international mechanism to end the Israeli occupation of Palestinian land, and the lack of international law being enforced, as expressed in dozens of un-implemented United Nations resolutions, BDS has grown to become a major platform to facilitate solidarity with the Palestinian people, apply pressure on and demand accountability from Israel and those who are funding, or in any way enabling, Israel's occupation of Palestine.

3 -- Is BDS a Palestinian or a global movement?

The call for BDS is made by Palestinian society. This is important, for no one has the right to represent the Palestinian struggle but Palestinians themselves.

However, the BDS movement itself -- although centred on Palestinian priorities -- is an inclusive global platform. Grounded in humanistic values, BDS aims to court world public opinion and appeals to international and humanitarian law to bring peace and justice in Palestine and Israel.

4 -- What are some of the historical precedents to BDS?

The boycott movement was at the heart of the South African struggle that ultimately defeated Apartheid in that country. Roots of that movement in South Africa go back to the 1950s and 60s, and even before. However, it was accelerated during the 1980s, which, ultimately, led to the collapse of the Apartheid regime in 1991.

There are many other precedents in history. Notable amongst them is the Boston Tea Party, protesting unfair taxation by the British Parliament; the Montgomery Bus Boycott in 1955 (which ushered in the rise of the Civil Rights Movement led by Martin Luther King. Jr.), and the Salt March led by Mohandas Gandhi in 1930 (which initiated the civil disobedience campaign that was a major factor leading to India's independence in 1947.)

All of these are stark examples of popular movements using economic pressure to end the subjugation of one group by another. BDS is no different.

Related Topic(s): Boycott; International; Israel; Occupation; Palestinian; Wars, Add Tags
Add to My Group(s)
Go To Commenting
The views expressed herein are the sole responsibility of the author and do not necessarily reflect those of this website or its editors.