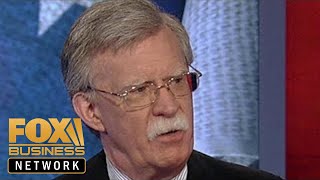 National Security Adviser John Bolton on a recent Fox News broadcast regarding the situation in Venezuela.

In "official" Washington is there anyone more fanatical than Trump's national security adviser John Bolton?

Unlike all presidential advisers that come to mind before him Bolton doesn't just advise the president behind the scenes he's out there seemingly on his own.

Regarding Venezuela the drumbeat in Washington for removing Nicolas Maduro as the legitimately re-elected president of the country in favor of assembly leader Juan Guaido, the self appointed new president continues in full roar.

Yesterday Bolton in a tweet condemned Maduro as he "hides in a military bunker somewhere, surrounded by his Cuban overseers and corrupt cronies" denouncing him as a "cowardly autocrat", while praising Guaido as a "brave leader", even as Maduro was openly addressing his supporters in the streets of Caracas.

But Bolton's stance on Iran that's most worrisome. In a 2016 speech to the Mujahideen-e-Khalq, an Iranian exile group dedicated to the overthrow of the government in Tehran-which by the way the US between 1997 and 2012 listed as a terrorist group-Bolton said, "I just say again what I've been saying for ten years that I've been coming to this rally; the regime in Tehran needs to be overthrown at the earliest opportunity". Got that? Bolton had been coming to MEK rallies while the US had them listed as terrorists.

Now US sanctions against Iran are about to be ramped up as Trump threatens to halt all Iranian oil shipments even to those countries that were previously exempted including China, India, Japan, Taiwan, South Korea andTurkey. All this after Trump recently listed the Iranian Revolutionary Guard Corps IRGC, as a terrorist group to which Iran reciprocated placing CENTCOM, the US Central Command on its terrorism organization list.

The relentless targeting of Iran has all the earmarks of Bolton behind it.

Oh sure Trump in his 2016 campaign said he'd remove the US from the nuclear agreement Obama signed with Iran along with Russia, China, France , Britain and Germany in 2015 which he did in 2017. Its been Bolton along with Secretary of State Mike Pompeo and Vice President Mike Pence that have continued to say all options for attacking Iran are on the table.

In Israel Prime Minister Benjamin Netanyahu was recently re-elected. He has said Iran must leave Syria and sees Iran as its primary enemy. He salivates with the idea of the US attacking Iran.

As to Bolton, Daniel Larison in an April 30 column wrote after interviewing a former national security official who worked with Bolton said of him, "He has deep connections to the Israeli national security establishment and to Prime Minister Benjamin Netanyahu. In 2018, he gave a well-compensated speech to the Friends of the Israeli Defense Forces". John almost regards Israel as part of the United States. He thinks our interests and their interests are identical". [1]

As to Bolton doing his job as national security advisor the same former national security official told Larison, "It's chaos under Bolton. The national security advisor is supposed to facilitate the president's directives and coordinate national policy among various government agencies. That process has completely broken down. Bolton hasn't set any priorities. No one knows what the policies are-what's important, what's less important. The head is not connected to the body. Principals' meetings-crucial gatherings involving the President, the Joint Chiefs of Staff, and the heads of intelligence agencies-have become rare".

According to Larison, "Bolton isn't interested in having a well-run policy process because they would expose the president to views other than the ones he wants Trump to her. The more chaotic and disorganized the process is, the more that Bolton can impose his own preferences and effectively dictate what the administration's policies will be. Trump is weak, poorly-informed, and easily disracted, and that makes it much easier for Bolton to get away with this".

Think about it with Bolton as Trump's national security advisor since a year ago the summit last month with North Korean leader Kim Jong-un in Hanoi was a total bust. Trump demanded Kim give up his entire nuclear program before any US sanctions on North Korea would be lifted. Kim abruptly left the meeting because it was obvious Trump wasn't there to negotiate only to issue an ultimatum. Bolton's hand in this seems all too obvious as belligerency toward North Korea is his preference. He seems to believe an attack on North Korea "is still a viable way to eliminate North Korea's nuclear weapons. The same former official said, "Bolton still believes that such a strike is possible. We can still do it. We know where most, if not all their weapons are-we could destroy their nuclear capability. There are ways to deal with their artillery." As to potential casualties Bolton said he "wishes we weren't at this point. But the military option remains viable."

Couple this with Trump initially wanting and establishing a rapport with Kim during their first summit in Singapore in 2017. Of course this came before Bolton was on the scene.

Retired. The author of "DECEIT AND EXCESS IN AMERICA, HOW THE MONEYED INTERESTS HAVE STOLEN AMERICA AND HOW WE CAN GET IT BACK", Authorhouse, 2009
Related Topic(s): John Bolton; John Bolton Warmonger; Trump And Bolton, Add Tags
Add to My Group(s)
Go To Commenting
The views expressed herein are the sole responsibility of the author and do not necessarily reflect those of this website or its editors.