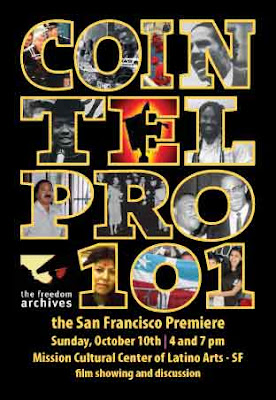 The FBI's War On Democracy

Claude Marks, Director of The Freedom Archives, talks to Angola 3 News about the highly anticipated new documentary film, entitled COINTELPRO 101, which is premiering on October 10, at the Mission Cultural Center of Latino Arts in San Francisco.

According to its website, the Freedom Archives "contains over 8000 hours of audio and video tapes. These recordings date from the late-60s to the mid-90s and chronicle the progressive history of the Bay Area, the United States, and international solidarity movements. The collection includes weekly news/ poetry/ music programs broadcast on several educational radio stations; in-depth interviews and reports on social and cultural issues; diverse activist voices; original and recorded music, poetry, original sound collages; and an extensive La Raza collection."

Freedom Archives has released other audio and video documentaries, including the recent video about the San Francisco Eight, entitled "Legacy of Torture." Legacy of Torture can be viewed online, as well as the previous films Voices of Three Political Prisoners (featuring Nuh Washington, Jalil Muntaqim and David Gilbert), Charisse Shumate: Fighting for Our Lives, and Self Respect, Self Defense & Self Determination (featuring Mabel Williams and Kathleen Cleaver, introduced by Angela Davis).

Over 40 years ago in Louisiana, 3 young black men were silenced for trying to expose continued segregation, systematic corruption, and horrific abuse in the biggest prison in the US, an 18,000-acre former slave plantation called Angola. In 1972 and (more...)
Related Topic(s): Archives; COINTELPRO; Culture; Democracy; Democracy; Democracy History; Film Festivals; Freedom; Police; Repression; (more...) Torture, Add Tags  (less...)
Add to My Group(s)
Go To Commenting
The views expressed herein are the sole responsibility of the author and do not necessarily reflect those of this website or its editors.