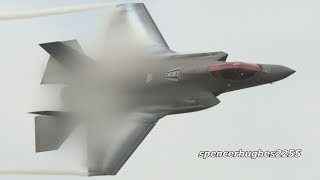 The latest was revealed in a "Daily Beast" article by David Axe titled, "America is Stuck With a $400 Billion Stealth Fighter That Can't Fight" [1] .

According to Axe, "If one of the military's new F-35 stealth fighters has to climb at a steep angle in order to dodge an enemy attack, design flaws mean the plane might suddenly tumble out of control and crash."

"Also some versions of the F-35 can't accelerate to supersonic speed without melting their own tails or shedding the expensive coating that helps to give the planes their radar-evading qualities."

Citing a "Defense News" report of June 12, 2019, Axe "revealed flaws that previously only builder Lockheed Martin, the military, and the planes foreign buyers knew about".

Meanwhile, "Pentagon officials plan to declare an end to the testing phase of the F-35's development sometime in late 2019 and clear the fighter for mass production".

Yet the Pentagon decided to manufacture F-35's while still testing them and Lockheed has already delivered some 400 planes to the Air Force, Navy and Marine Corps.

Think about it. This boondoggle is the Pentagon's most expensive military hardware program ever by now over a $trillion and counting. A couple of years ago an unconfirmed report had the plane having difficulty flying in bad weather. Now even with the above flaws not resolved the brass has decided to start mass producing this turkey by the end of the year.

Of course the Congress has been in favor of the F-35 program simply because it produces jobs so they'll likely just rubber stamp the Pentagon's decision to mass produce it.

This is the US. Profit is the primary consideration; making quality secondary. And it's not just the military.

Look at our private corporate owned health care system. The Aetna's, GEICO, Blue Cross/Blue Shield lobbies help to underwrite the campaigns of our politicos who aren't about to enact a Medicare for all type system in the US even though it would cover everyone. Sure that would eliminate the corporate overhead costs-which contributes nothing to health care outcomes and just raises the costs-but that means eliminating the profits of the corporations whose funds get their pliant sycophants in Congress re-elected. Quality of health care is secondary; corporate profit is primary.

Which leads to our flawed electoral system where corporate largesse largely determines who runs for office and who gets elected. That those elected enact the laws, regulations, oversight and enforcement to the benefit of their big corporate underwriters is a natural consequence of that flawed system.

The Pentagon having the F-35 mass produced knowing they could have serious flaws but doing it anyway reminds one of the financial industry in 2007 prior to the 2008 financial meltdown where the big banks continued to sell packaged mortgage backed securities to their most trusted clients knowing they would probably be worthless but did it anyway.

Getting back to the F-35 and its serious flaws. It all smacks of a con job and a betrayal. You're a pilot of an F-35 that could "suddenly tumble out of control and crash" and you died in the process? What does that say of your employer telling your loved ones "he died for his country"? Please. When the truth would be "he was conned by us, used as fodder in order to keep our military/industrial/political complex fully funded, fight endless, unnecessary wars against whatever "enemy" we concocted at the time. Sorry for your loss."

Retired. The author of "DECEIT AND EXCESS IN AMERICA, HOW THE MONEYED INTERESTS HAVE STOLEN AMERICA AND HOW WE CAN GET IT BACK", Authorhouse, 2009
Related Topic(s): Congress; Design; F-35 Stealth Fighters; Pentagon, Add Tags
Add to My Group(s)
Go To Commenting
The views expressed herein are the sole responsibility of the author and do not necessarily reflect those of this website or its editors.