The only question is the fate of the remnants. 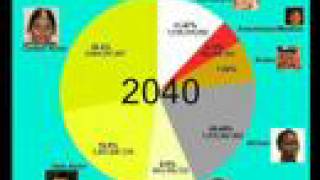 The lack of response by white Americans to their demonization as they decline as a percent of the population demonstrates their lack of concern with their fate.

It seems as if the West is dead in every way. The rule of law is dead throughout the West. Democracy is a scam. There is oligarchic rule. Everything is done for organized interest groups. Nothing is done for the people. Putin just declared: "West's leading role is ending." How right he is.

The Brookings Institution is not a racist white supremacist outfit. It is a neoliberal/neoconservative "think tank." One of its members, William H. Frey, has authored a report, "Less than Half of U.S. Children Under 15 Are White, Census Shows," based on the recently released 2018 U.S. Census Bureau report. The information in Frey's article is fascinating. It shows a disappearing white population.

The American middle class, which is largely white, bears the brunt of income taxation which means that white Americans bear the brunt of the cost of the welfare support systems. The white middle class also bears the brunt through property taxes of the public school systems. Many middle class members pay again in private school tuition for the education of their children in safer and more ordered environments. The cost of university education is exorbitant. All of these costs are rising faster than middle class incomes, and this limits white procreation.

White political influence will decline more rapidly than the white percentage of the population as politicians pander to the rising majority. One wonders if the white minority will be given minority preferences.

"These demographic trends make plain that, as racially diverse younger generations become part of the labor force, tax base, and consumer base, the nation will need to balance these groups' distinct interests and needs in areas such as education, family services, and affordable housing with the health and social support requirements of a large and faster growing older population that will be entering its post retirement years. Indeed, the youthful 'minority white' tipping point shown in the new census statistics needs to be duly noted. It has important implications for America's future."

This is the question that Frey quietly raises: "In Identity Politics America, where white people are demonized as victimizers and everyone else receives sympathy as their victims, where the Mexican-American head of New York City public schools has announced his campaign to remove 'toxic white values' from the school curriculum, where the New York Times has committed to 're-framing' the United States as a racist white slave state, will the new majority composed of white people's victims consent to giving up resources to provide Social Security and Medicare for people they have been brought up to believe victimized them?

The chances of such support are further negated by the diminishing numbers of the white voting population and by the decline of the US economy that is forcing the US labor force into lowly paid domestic service jobs which are themselves threatened by robotics. Will a non-European population struggling to make ends meet accept the taxation necessary for Social Security and Medicare for a demonized group of the population that they have been taught to hate? Identity Politics does not permit social cohesion.

Decades of unbroken massive inflows of third world immigrants have destroyed the "melting pot" and produced in its place a tower of babel. Multicultural populations lack a common interest. They are the antithesis of a nation. Everywhere in the Western world the nations are expiring.

In 1973, Jean Raspail predicted the fate of European peoples in his novel, The Camp of the Saints. White people are now living his novel.

Related Topic(s): Decline; Identity; Population; White Nationalism, Add Tags
Add to My Group(s)
Go To Commenting
The views expressed herein are the sole responsibility of the author and do not necessarily reflect those of this website or its editors.