Those surgeons who had been to Mozambique confirmed that long before being boarded on the ship, the captives would have felt anguish, forced to survive on roots and bugs and arriving at the coast emaciated and with their stomachs distended. Then, once on the ocean, crowded in a dark hold with no ventilation, they'd have had nothing to do other than to listen to the cries of their companions and the clanking of their chains. Many would have gone mad trying to make sense of their situation, trying to ponder the 'imponderable.'

Greg Grandin, The Empire of Necessity, Slavery, Freedom, and Deception in the New World

The same map appears on the inside back and front covers and again on the second page of chapter one. Eyes traveling from left to right, there is the familiar shape of South America lying next to the waters of the Atlantic Ocean, and then the lower western and southern coast of Africa on the right. Travel routes, ship routes, to be exact, designated by lines and arrows, run from Bonny Island to the south of Senegal on to Rio de Janeiro. Sailing south of Rio de Janiero, ships arrive at a port in Montevideo. There is a single line connecting Montevideo to the tip of South America. This single line from Montevideo to Rio de Janiero will make trade in commodities global. It was a daring decision to push on, beyond the limits, for one seafaring captain. Courageous some would say. Months of harsh seas and indifferent winds. Months, too, for some, of indignation.

Hundreds of thousands of tons of cargo traveled up and down these routes. In fact, if we just leave it at that--just leave it at tons of sugar and rum, clothes, tons of spices, oranges, then the maps would tell the story of trade, the exchange of goods, between Africa and South America.

Maybe the folks at Metropolitan Books, Henry, Holt and Company, thought the maps sufficient to explain the whole story, but readers of Greg Grandin's The Empire of Necessity: Slavery, Freedom, and Deception in the New World would soon know (just take a guess by looking at the title of the book) that these lines on the map represented slave routes. In fact, this trade, this exchange of goods, had as its most profitable commodity or contraband--human beings. Africans. "Slaves were the flywheel on which the whole thing turned." 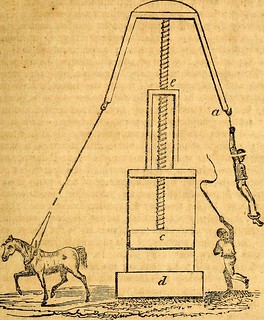 Image from page 34 of .Narrative of the adventures and escape of Moses Roper from American slavery : with an appendix, containing a list of places visited by the author in Great Britain and Ireland and the British isles, and other matter. (1848)
(Image by Archive Book Images)   Details   DMCA

But where are the real origins of these solid and dotted lines representing trade routes from Africa to South America? Would not the slave routes really begin in Europe--Spain, Portugal, France, England, and Holland?

It was a global endeavor.

Related Topic(s): Deception; Democracy; Freedom; Liberty; Oppression; Resistance; Slavery; Slavery-Forced Labor; Suffering; Violence; (more...) World Vision, Add Tags  (less...)
Add to My Group(s)
Go To Commenting
The views expressed herein are the sole responsibility of the author and do not necessarily reflect those of this website or its editors.