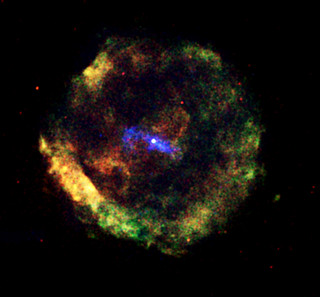 The remains of a massive star that exploded, perhaps being witnessed by Chinese astronomers in 386 A.D.
(Image by Smithsonian Institution)   Details   DMCA

To stay relevant, science needs change as fast as a baby's diapers.

What was believed to be true yesterday, scientifically, could be proved a lie today. Like it was believed that electrons in the atom move in a certain way. Quantum physics found that they do not. And in fact, at times, behave in an inexplicably arbitrary and uncertain way.

This changes the whole dynamics of science. It cannot explain this phenomenon. It is called the Uncertainty Principle. It baffles the physicists.

The "god particle", i.e. the 'thing' which is thought to be the 'make' of everything, and is said to 'move' all, is the life force behind each and everything, is a matter that science may never catch. For, it looks for the Thing-in-Itself in 'matter'.

Matter, as better brains of science, have found ceases to be a material reality beyond a certain point. What it becomes, or is, the scientists calling it the 'god particle', seek to unravel. But do not get 'It'.

Maybe the answer lies in metaphysics.

The freemystics of the world, especially in India, from the ancient times have always self-realized 'It'. Sages call it Enlightenment. Or Awakening. Or simply, Self Realization. That is, by self, not theoretically but as a 'physical' reality, realizing the actual nature of 'What Is'. Beyond empirical science, and above the mundane religious nut-ism.

Science cannot find the 'god particle' because "It" is the Within.

Firstly, this Source of All That Is, is not a particle. Alternatively, it is also not a person, that simple folks all over the world call their fancied deity. Who - the Christian, Judaic or the Islamic religious literature reveals - is more of a megalomaniac, a mad dog than god!

But of course, such a lunatic is not God.

As too is not the God Particle.

IT is the 'That' of each and everything. The First Principle. The Absolute of all things. The Beginning and the Ending. Simply put, from which all comes, and having come, goes back. The 'It' of every little, or big thing. Especially, of you, that which makes you, "this" you! That is the Eternal Reality behind yours, and all life. Which brings this wonderful world, the whole cosmos into existence. This! That!

The evidence of 'It' is in each and everything.

However, it is not a 'thing', though unto all, as everything. It cannot be found as a this or that material, a matter, a thing! 'It' is the Whole of the whole thing. Is the Infinite Unity, immanent and "alive" in each and everything. Even the non-sentient thing.