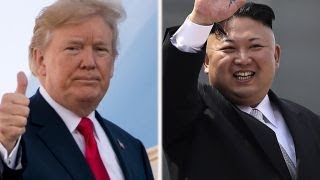 On November 19, Air Force Gen. John Hyten, commander of the US Strategic Command, declared he would refuse to follow an illegal presidential order to launch a nuclear attack. "If you execute an unlawful order, you will go to jail," the general explained at the Halifax International Security Forum in Nova Scotia. "You could go to jail for the rest of your life."

There is cause for concern that Donald Trump may order a nuclear strike on North Korea. Trump has indicated his willingness to use nuclear weapons. In early 2016, he asked a senior foreign policy adviser about nuclear weapons three times during a briefing and then queried, "If we have them why can't we use them?" During a GOP presidential debate, Trump declared, "With nuclear, the power, the devastation is very important to me."

As the heated rhetoric with North Korean president Kim Jong-un escalated, Trump tweeted that Secretary of State Rex Tillerson was "wasting his time" by pursuing diplomacy with North Korea. Trump threatened to "totally destroy" North Korea. During his visit to South Korea earlier this month, Trump distinguished his administration from prior ones, who refrained from using nuclear weapons against North Korea. "This is a very different administration than the United States has had in the past," he said. "Do not underestimate us. And do not try us."

In April, "multiple senior intelligence officials" told NBC News that the administration was "prepared to launch a preemptive strike" if they thought North Korea was about to conduct a nuclear test. Preemptive strikes violate the United Nations Charter, which forbids the use of military force except in self-defense or with permission from the UN Security Council.

A Duty to Obey Lawful and Disobey Unlawful Orders

The Uniform Code of Military Justice (UCMJ) requires that all military personnel obey lawful orders. Article 92 of the UCMJ provides, "A general order or regulation is lawful unless it is contrary to the Constitution, the laws of the United States...." Additionally, both the Nuremberg Principles and the Army Field Manual create a duty to disobey unlawful orders.

Article II of the Constitution states, "The President shall be Commander in Chief of the Army and Navy of the United States, and of the Militia of the several States, when called into the actual Service of the United States." However, Article I specifies that only Congress has the power to declare war. Taken together, the articles convey that the president commands the armed forces once Congress authorizes war.

The president can only use military force in self-defense or to forestall an imminent attack. There must exist "a necessity of self-defence, instant, overwhelming, leaving no choice of means, and no moment for deliberation," under the well-established Caroline Case. A president has no lawful authority to order a first-strike nuclear attack.

The ICJ continued, "However ... the Court cannot conclude definitively whether the threat or use of nuclear weapons would be lawful or unlawful in an extreme circumstance of self-defence, in which the very survival of a State would be at stake." That means that while the use of nuclear weapons might be lawful when used in self-defense if the survival of the nation were at stake, a first-strike use would not be.

Article 509 of Field Manual 27-10, codifying a Nuremberg Principle, specifies that "following superior orders" is not a defense to the commission of war crimes, unless the accused "did not know and could not reasonably have been expected to know that the act ordered was unlawful."

Gen. Hyten, who said he had been trained in the law of war for many years, cited its four guiding principles: distinction, proportionality, necessity and unnecessary suffering.

Related Topic(s): North Korea; Nuclear Attack; Nuclear War; Pentagon; Policy, Add Tags
Add to My Group(s)
Go To Commenting
The views expressed herein are the sole responsibility of the author and do not necessarily reflect those of this website or its editors.