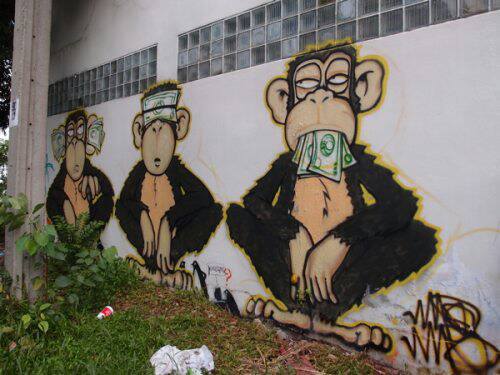 Not so Wise Monkeys
(Image by open)   Details   DMCA
>

All around the world on national stages there is this right wing and left wing interplay in relation to the function of government. In the United States the tone of the opposition is stark, there being really only two parties with any clear set of power, the other tones of left and right not nearly as numerous. In the US the parties themselves are certainly mutually dependent opposing forces. It is wholly true that many voters do not vote for the left wing or right wing but rather against one or the other. Voters will throw out voting with their principles in order to vote against principles they are against.

Whatever the flavor of right and left, of liberal and conservative in whatever nation the right and left paths work in manners that created them in the first place; that is by presenting limitations to constructs, specifically in the most detrimental most widely assumed thought process; the either/or construct.

This consistent left wing and right wing dynamic, this either/or mutually dependent opposition expresses itself internationally in the current contrast largely portrayed as the options, and inferred to be the only options, as all either/or constructs. The Matrix of Four, Philosophy of The Duality of Polarity applied to this limited and limiting either/or construct reveal the two other options of localization and individuation.

"Institutions are not individuals." ~The Complete Patriot's Guide

The Matrix of Four is applicable to comprehension of morality and legality.

Right and wrong do not shift. Our toleration of wrongdoing shifts (or rather is shifted by institutional influence) which makes it appear so. Legality changes and our tolerations change but right and wrong are simple. It is always wrong to take advantage of others, unless you are part of nationalism or globalism and then if it is legal it is permitted and promoted. Wrongdoing will always be wrong, its legality changes, how tolerant of wrongdoing people are changes.


The interconnected worldly institutions offer conformity or confrontation in nationalism and globalism. Let us promote localization and individuation for the development of the unity of humanity.

From Philosophy of The Duality of Polarity

Related Topic(s): Conformity; Consciousness; Globalism; Government; International; Liberty; Localization; Nationalism; People; Philosophy; (more...) Polarity; Politics; Self-development; Thinking, Add Tags  (less...)
Add to My Group(s)
Go To Commenting
The views expressed herein are the sole responsibility of the author and do not necessarily reflect those of this website or its editors.