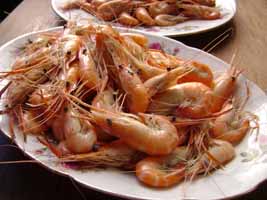 Shrimp was once considered a treat for special occasions, but now it is a frequent mealtime staple. And that is not necessarily so good.

More than half of imported shrimp is "farmed"grown in huge industrial tanks or shallow, manmade ponds that can stretch for acres. At least 150 shrimp can be crowded into a single square meter, where they're fed commercial pellets, sometimes laced with antibiotics to ward off disease. What isn't eaten can sink to the bottom and rot, creating a putrid soup of feed and fecal matter.

These vast, polluting overseas operations routinely use antibiotics that are needed to treat common human infectionsfor example, Amoxycillinwhich is not approved in U.S. shrimp farming but used overseas. Such use, of course, encourages antibiotic resistant bacteriaso that human and animal diseases no longer respond to the drugs and can become life-threatening. What's more, this resistance isn't limited to one type of bacteria, but can be transferred to other, more common bacteria, including those that cause common human infections. According to the Centers for Disease Control and Prevention (CDC), antibiotic-resistant infections are associated with 23,000 deaths and 2 million illnesses in the U.S. each year.

In the U.S., no antibiotics are approved for regular use in shrimp farming, but many foreign countries permit them, making imported shrimp a big concern. The US's Food and Drug Administration examines only a fraction of the shrimp coming into the countryand "examined" may simply mean reading the label, not actually testing the shrimp for residues in a laboratory. Between 2009 and 2012, the FDA tested just 0.9 percent of shrimp imports.

One reason shrimp producers turn to antibiotics is that shrimp crowded into small tanks are extremely susceptible to diseases, such as Early Mortality Syndrome (EMS), which can wipe out entire harvests. In 2012, EMS is estimated to have affected 80 percent of the shrimp farms in Vietnam. And there is more cruelty involved. A common practice in the shrimp industry is to removed the eyestalks of female shrimp to hasten breeding by inducing maturation and spawning.

Shrimp producers may also be using pesticides such as toxic organophosphates, and antifungals such as carcinogenic Gentian violet. These chemicals are banned in U.S. shrimp farming, and they can put your health at risk and damage the environment. Yet labels can misleadingly says, "natural," "environmentally aware," "chemical-free," "no hormones" and "sustainable." These are meaningless claims since there are no applicable standards (and hormones are not used in shrimp production anyway).

Also, in some cases, farmed white-leg shrimp (the most commonly farmed shrimp globally) are sold as "wild" or "Gulf" shrimp.

Of course shrimp farming is lucrative because it produces cheaper shrimp than wild shrimp. A one-acre shrimp farm can produce as much as 89,000 pounds of shrimp worth about $400,000 a powerful incentive for farmers to maximize production.

But are wild caught shrimp really betterassuming someone wants to pay more? Consider this: For every pound of shrimp caught in the wild, one to three pounds of other speciesincluding endangered sea turtles and dolphins'can be caught and killed. Devices that allow other sea life to escape their nets are available for trawls but not universally used. In 1987 Louisiana passed a law to prevent enforcement of a federal requirement for such devices, called Turtle Excluder Devices, or TEDs. In 2016, then Governor Jindal thankfully reversed the law.

So what is the answer for shrimp lovers? First, just plain eat less shrimpthe environment and shrimp will thank you. Secondly, when you do buy shrimp look for a label that says Naturland which is the best assurance of ethical production.

Related Topic(s): Antibiotics Pollution; Food Industry- Organic; Food Industry- Restaurant-Fast; Food-Agriculture; Ocean Pollution; Pollution; Water Pollution, Add Tags
Add to My Group(s)
Go To Commenting
The views expressed herein are the sole responsibility of the author and do not necessarily reflect those of this website or its editors.