Austin Beutner visits a Grab and Go site
(Image by LAUSD)   Details   DMCA
tps://www.facebook.com/groups/375015749917149/permalink/978096982942353" rel="noopener nofollow">In a district with over 80% of families living in poverty, Austin Beutner had a moral imperative to follow the lead of the majority of BIPOC parents in the district who wanted to wait to reopen schools until it was safe to do so." - Jenna Schwartz, Parents Supporting Teachers

As Austin Beutner ends his tumultuous term as the leader of the country's second-largest school district, I am drawn to the similarities of former New York City Mayor Rudy Giuliani. Immediately prior to the terrorist attacks on September 11, 2001, Giuliani was a politician in decline. His "combativeness" had "exhausted" New Yorkers and in smooth waters, his oversized personality threatened to "capsize [a] ship that was stable."

When two planes struck the World Trade Center "some of the very traits that had been liabilities for Giuliani became important political assets." The authoritarian tendencies of his leadership style worked well for a city facing an immediate crisis and the lame-duck became "America's Mayor."

Like Giuliani, Beutner was an unpopular leader before facing a life-changing crisis. He was hired without the consensus of the entire board. Instead, he was pushed through before the charter school industry supporters on the board lost their majority due to the impending resignation of convicted felon Ref Rodriguez. Deliberations took place behind closed doors without input from stakeholders and the vote to extend him a contract possibly violated California's open meeting laws.

Without a professional background in education or ties to the LAUSD, Beutner floundered as the leader of the district. In his first major test, he badly blundered negotiations with the teachers' union. As noted in a press release by Parents Supporting Teachers, the Superintendent "approached negotiations from a strict business-only perspective, ignoring stakeholder pleas for good-faith bargaining." While United Teachers Los Angeles (UTLA) pushed for reforms that would improve student outcomes, Beutner focused on pushing false fiscal narratives, scare tactics, and political maneuvering. The result was a strike that had been preventable.

From the time the strike began, it was clear that Beutner had not done his homework and lacked the support to continue stonewalling the union's demands. Parents overwhelmingly supported teachers and kept their children out of classrooms being staffed by district employees more qualified to babysit than teach. Instead of attending school, many students joined their teachers on the picket lines. As the strike continued, attendance continued to fall and Beutner had no option but to cave. The win by UTLA gave students lower class sizes, increased nursing coverage, and extended hours for high school libraries.

"When he chose to play hardball during the strike, thousands of public school families responded by standing beside educators in the pouring rain, proving that public schools are the heart and soul of our neighborhoods and parents have an equal amount at stake as educators." - Nicolle Fefferman, Parents Supporting Teachers

Despite this high-profile failure that had some calling for his resignation, Beutner seemed incapable of learning from his mistakes. Even though the elected school board members were his superiors, he refused to provide them with the information they requested about his actions. He ignored the will of the stakeholders and attempted to reduce elementary school library aides. Depriving students of a badly needed source of funding, Beutner botched the rollout of Measure EE, contributing to its failure at the polls. The LAUSD was rudderless with a leader that seemed incapable of leading.

And then tragedy struck.

The sudden and unprecedented closure of LAUSD campuses due to COVID-19 provided a crisis situation that was perfectly suited to Beutner's business background. In an education environment where no one had any experience, the Superintendent was suddenly on an even playing field. His decisive response helped to bridge some of the technology divide, providing many students with the tools they needed for remote learning.

Beutner's greatest accomplishment of his term was providing millions of meals not only to students and their families but to anyone in the community who was hungry. Los Angeles avoided the massive food lines seen in other major cities mainly due to the success of the district's Grab and Go food program.

The Superintendent also resisted the efforts of groups like Nick Melvoin's Speak Up to open campuses before it was safe to do so. Unlike combativeness before the strike, Beutner worked with UTLA and crafted a plan that limited the number of COVID-19 infections in our schools. While "nine other largest school districts all had thousands or even tens of thousands of cases", the LAUSD "finished its school year with only 360 Covid infections."

There were also some missteps as the Superintendent took advantage of the broad emergency powers needed during the crisis. The most troubling was contracting for COVID-19 testing services with a three-month-old company that was headed by someone with whom he had political and financial ties. 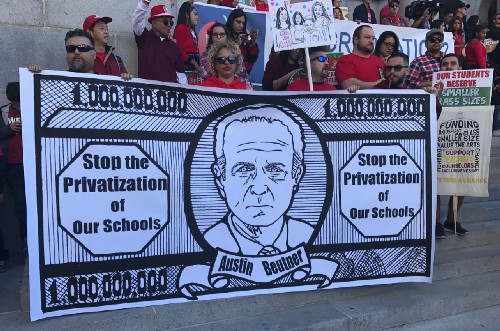 (Image by Carl J. Petersen)   Details   DMCA
The downfall of Giuliani from "America's Mayor" to a laughing stock who holds press conferences at Four Seasons Total Landscaping with hair dye dripping down his face should provide warning signs to those who judge Beutner as if his term started on March 16, 2020. Beutner's steering of the district into a strike, his attempted defunding of libraries, and insubordination were serious failings and should not be ignored when assessing the past three years. They are indications that the board did not evaluate him properly during the hiring process. The current LAUSD Board Members need to heed calls by groups like Parents Supporting Teachers to ensure that his successor "is hired through a fair and transparent process that gives voice to the BIPOC community, engages all stakeholders, and honors the value of public education and the neighborhood schools LAUSD represents."

Carl Petersen is a parent advocate for students with special education needs and for public education. He is an elected member of the Northridge East Neighborhood Council and serves as the Education Chair. As a Green Party candidate in LAUSD's District 2 School Board race, he was endorsed by Network for Public Education (NPE) Action and Dr. Diane Ravitch called him a "strong supporter of public schools." For links to his blogs, please visit www.ChangeTheLAUSD.com. Opinions are his own.