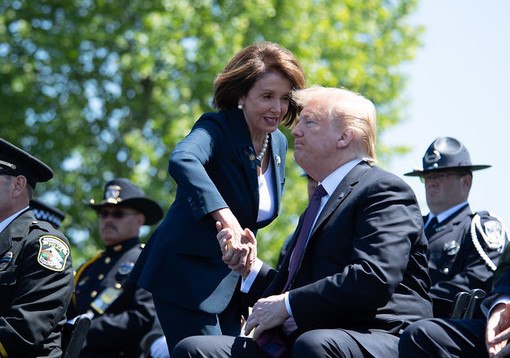 I never cease to be amused by the brazen hypocrisy of the dismal, dollar-drenched Goldman Sachs-Citigroup-JP Morgan Chase-Council on Foreign Relations Democrats. Yesterday morning, House Speaker Nancy Pelosi (Net Worth: $101 million, D-CA) blessed the drafting of Articles of Impeachment against the demented fascist oligarch Donald Trump. She gave the nod in a short oration that cited the Declaration of Independence and the U.S. Constitution to accuse the rancid and rogue President of the United States of trying to enlist foreign leaders in helping him undermine the integrity of the 2020 presidential election.

The tangerine-tinted Twitter-tantruming tyrant Trump is guilty as charged. Trump's Insane-in-the-Ukraine gambit is a removal-worthy crime. It would have been recognized as such by the infant U.S. republic's wealthy slave-owning and merchant capitalist "founders"/owners.

It's an obvious intra-ruling-class offense that would lead to constitutional defenestration but for the trumping of republican checks and balances by the Republican Party's dominance in the US Senate, where archaic apportionment rules inherited from the nation's 18th century charter drastically over-represent the nation's most reactionary, rural, and white (-nationalist) regions -- the Trumpenvolk bastions.

Meanwhile, the Democratic Party and its allied media organs remain guilty of subverting the electoral U.S. process in service to the nation's homegrown corporate and financial oligarchs. The dangerous laughingstock Trump owes his tragic presence in the White House and I think the distinct possibility that he could get a second term (how about a third?) to the Democratic establishment's insistence on ramming neoliberal centrism down the throats of a citizenry that leans well to the left of both reigning U.S. state-capitalist political parties.

A people's and opposition party committed to democracy, social justice, and indeed to the popular mobilization required to win elections would fight meaningfully for these things during and beyond elections and outside as well as inside elected office. It would be Sanders' party, if not something to the left of a Sanders-style party (as it would need to be to meaningfully confront the Pentagon System, which cancels out much of the progressive agenda with massive war spending).

The Democrats' failure to fight meaningfully for these things both inside and outside of elected office is no small part of why the Democrats lost the White House to a demented fascist oligarch in 2016. Much the same can be said for the Democrats' electoral failures in 1980, 1984, 1988, 2000, and 2004, not to mention the party's significant defeats at the state and Congressional levels over the long neoliberal era.

So what? Who cares? The Democratic Party and its powerful allied media isn't about social justice, environmental sanity, racial equality, and democracy. It isn't even mainly about winning elections. It is first and foremost about serving corporate sponsors and keeping the electorate chained to a narrow and binary choice between (a) corporate, financial, and imperial oligarchy with a more culturally diverse, metropolitan, professional class, bi-coastal and liberal veneer and (b) corporate, financial, imperial oligarchy with a more white-nationalist "heartland," "Christian," and frankly neofascist feel. The party's big-money backers and bank-rollers' dirty little secret is that they'd rather lose to the right-wing neofascist party than to "the [big bad] Left," even the moderately progressive small-L left wing of its own party.

Killing the left in its own party is a bigger priority than defeating Republicans for the Democratic establishment. Sanders (for whom I have never quite been a cheerleader) is the party's best hope to rally the no-show voters who have checked out of the big money and media-dominated political process since U.S. "democracy" is controlled by and functions for privileged elites. If the Democratic Party cared about winning above all else, it would mobilize the non-voters by pushing the issues and values backed by the progressive working, lower, and middle-class majority.

But since the dismal demobilizing establishment dollar Dems' top goals are serving and in even joining the nation's financial cream, they insist against all historical evidence and experience that the way to win is to get a bunch of centrist Independents back from Trump. Never mind that centrist Independents make up just 7 percent of the electorate.

Hatred of their own party's big bad "L"eft is so extreme among Wall Street-corporate Dems that they feel compelled to warn against the excessive "radicalism" not just of the progressive populist Sanders but even of the vaguely half-progressive liberal Elizabeth "Capitalist to My Bones" Warren, who is eminently co-optable by, well, capitalists.

Warren and especially Sanders, running in accord with majority progressive sentiment, are consistently disparaged and ignored on CNN, MSNBC (MSDNC), and "P"BS. In Sanders' case, it's almost as if he doesn't exist on these venues this even as he has quietly moved into a solid second place close behind Joe Biden in the early Democratic caucus and primary states.

Paul Street (www.paulstreet.org and paulstreet99@yahoo.com) is the author of Empire and Inequality: America and the World Since 9/11 (2004), Racial Oppression in the Global Metropolis (2007), Barack Obama and the Future of American Politics (more...)
Related Topic(s): Corporate; Democracy Decay; Democratic Party; Democratic Sellout; Democrats In Name Only Dinos; Trump, Add Tags
Add to My Group(s)
Go To Commenting
The views expressed herein are the sole responsibility of the author and do not necessarily reflect those of this website or its editors.