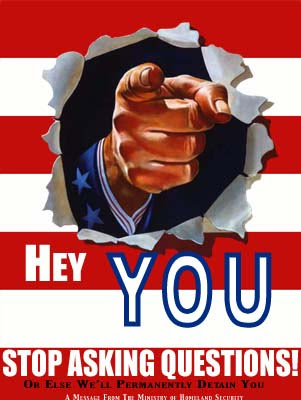 
It's happening in Wisconsin. It's happening in Michigan. And to no one's surprise, it is happening in the state of Florida where the election of 2000 was stolen from Al Gore by an ideologically perverted Supreme Court, and handed over to a disgusting, half-witted little frat boy from Crawford, Texas. In fact it is happening in states all over the country where the Grotesque Old Party controls the legislatures. Across America, Republican politicians working overtime, at this very moment, to ensure that the ballots of a huge segment of the American people are not only ignored - they're not even cast . Was this a great country or what?

In an article from the Daily Kos that was republished this morning on the deliciously subversive website AlterNet, Chris Bowers wrote the following:

"I'd write that I'm shocked [ Shocked! ] a party facing recall elections is about to pass a law making it more difficult to vote in those recall elections, but sadly it isn't shocking at all. Limiting voting from Democratic-leaning demographic group s-- in this case students, the poor, and those without cars--i s a long-standing Republican tactic. Combined with Republican attempts to remove all limits on corporate spending in politics, it's part of a strategy to structurally alter the electorate in their favor."

Here is what is happening: The "party of Abraham Lincoln" (That is getting more difficult to write by the day, Thank goodness for quotation marks!) is in the process of a long-expected, long overdue self-destruction. Earlier this month when the majority of them signed onto Rep. Paul Ryan's scheme to destroy Medicaid and Medicare, the electorate - nationwide - hit the roof. They know damned well that if the present voting regulations remain in place they will be utterly destroyed at the polls on Election Day 20 12. What to do? Make goddamned sure that the very people who are most inclined to vote for the Democrats next year don't vote at all. How utterly convenient.

There are certain types of people who are not bloody likely to vote for the agenda of the disgusting, criminal enterprise that tries to pass itself off as a "political party". These people would comprise of African Americans, the elderly, city dwellers, the young, people who lack a license to drive, and the poor . And of course the trickiest problem facing them are the poor. As was noted in Matthew, 26:11:

"The poor you will always have with you."

The R epublicans are desperate, and as the old adage tells us, desperate times require desperate measures. Their solution is that in order to vote, every person who casts a ballot will be required to purchase a government-issued ID and produce it at their respective polling places. A lot of the elderly - the very same people who stand to gain the most from a Democratic victory in 2012 - tend to vote via the process of the absentee ballot. That is why the plutocracy's handmaidens are trying to make it more difficult for senior citizens to cast their vote in absentia. They are trying to steal the election of 2012. They will succeed only if we allow them to.

I'm going to do something I've never done before (and will never do again - I promise! ) I'm going to say something in favor of Adolf Hitler and the Nazis: When they too k power in March of 1933, they at least didn't f*ck with the electo ral process. Hitler's ascendance to power was achieved legally and in conformity to the German constitution as it stood at the time. That's right; I'm comparing the Nazis favorably to the Republican party. Things have gotten that weird.

QUESTION:
How on earth can it possibly be constitutional that a convicted felon, who has served their term and paid their debt to society , is not - for the rest of their lives - allowed by law to participate in the electoral process?

ANSWER:
Because u nless they are sporting a squeaky-clean, white collar, convicted felons tend to be poor or working class. Traditionally those people are not very sympathetic to the goals of the power elite. That is the reason - and the only reason - they are not allowed to vote. Let's stop kidding ourselves.

The uber right wing can no longer win on the basis of their ideas. The people are finally waking up to the fact that those ideas are beyond atrocious (What took them so long? I hope they had a nice nap). If t he Republican party is to survive, they have no other choice but to disenfranchise a huge segment of the public who bother to participate in democracy.

Well, um, gee whiz , I hate to be the bearer of bad news here, kids, but this is the sort of thing they do in dictatorships. Just thought you'd like to know.

New York  state is a fairly moderate place. Even in staunch ly Republican Orange County where I live, those who identify themselves as "register ed Republicans" tend to be reasonable and friendly people. Just the night-before-last, one of my closest and oldest friends, Tom Frederick (photo above), won a seat on the local school board. Tom is a Republican and fairly (although not extremely ) conservative. Politically speaking we don't agree on a whole heck-of-a-lot. Regardless of our differing worldviews, I voted for him and had no pangs of conscience in doing so. He's a good man and one of the most intelligent and decent people I have ever known. As I said, most people who are registered with the GOP in this part of the country don't have little birdies flying out of their ears. That's why the northeast is such a nice place to live and why I will never leave it. Thus I don't suspect that the moronic and grossly unconstitutional "voter ID" proposal will become law anytime soon here in the Empire State.

I am going to make a pledge here and now: I plan on arriving at my local polling place on Election Day 2012, with no other ID in my procession than my word that I am who I am , and my signature to compare with my previous voting record. Heaven help the person or persons who try to prevent me from casting my precious ballot. I promise you this: There will be violence. I will send to the emergency room - or the morgue - anyone who dares attempt to disenfranchise me.

The people who run the polling place in the village of Goshen are the loveliest, sweetest elderly ladies who always greet me with warm smiles, cookies and tea. I may need to rethink this.

Tom Degan is a former Green Party candidate for New York State Senate. He writes on a blogsite called, The Rant by Tom Degan. He is the recipient of the Presidential Medal of Freedom.....Okay, he didn't really receive the Presidential Medal of (more...)
Related Topic(s): America Freedom To Fascism; American Foreign Policy; American Peoples Congress; Americans With Disabilities Act; Voting, Add Tags
Add to My Group(s)
Go To Commenting
The views expressed herein are the sole responsibility of the author and do not necessarily reflect those of this website or its editors.