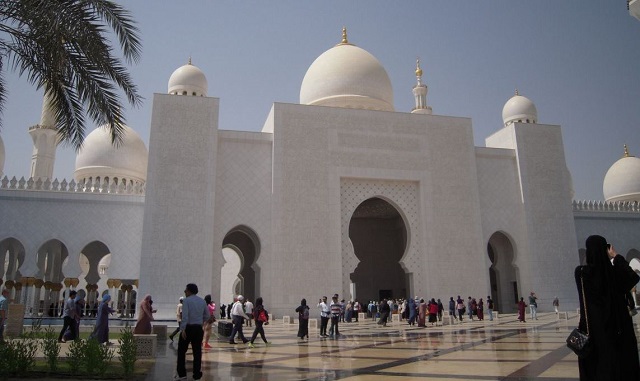 From the outset the ruling families of the seven UAE states bickered over everything from territory to sharing financial resources
(Image by strategic-culture.org)   Details   DMCA

Broidy, a major figure in the Republican Jewish Coalition, is under law enforcement investigation for selling access to Trump and other administration officials. FBI agents seized documents in Broidy's office related to potentially illegal "pay-to-play" operations involving Broidy's firms and the United Arab Emirates and Saudi Arabia, in addition to a Broidy extortion attempt against Qatar.

FBI agents also raided the Colfax Law Office, the Beverly Hills law practice founded by Robin Rosenzweig, Broidy's wife. Broidy and his wife represent the apex of Israel's influence-peddling moguls in the Los Angeles area and they are major players in both Trump campaign fundraising among the Hollywood elite. The FBI is particularly interested in Broidy's reported attempt to raise $1 billion in contracts for his private security company from the Saudis and Emiratis, in return for pressing Trump to steer US foreign policy toward Saudi Arabia and the UAE, and away from Qatar.

Broidy's association with the Saudis and Emiratis remains very suspect in the eyes of US law enforcement, as well as Arab interests skeptical of the close relationships between Riyadh and Abu Dhabi and Broidy and other agents of influence for Israel, such as Trump's son-in-law, Jared Kushner. After attending the Beverly Hills fundraiser, an event that was not attended by a single Hollywood A-List celebrity, Trump flew off to Las Vegas to speak to the annual meeting of the Republican Jewish Coalition. In the audience was Adelson, a deep-pocketed donor to Trump and other Republicans, who was wearing a red yarmulke bearing the name "Trump."

Pro-Israeli billionaires like Adelson have gotten their money's worth from Trump. Trump has done everything asked of him by the Binyamin Netanyahu government of Israel, including withdrawing from the Joint Comprehensive Plan of Action (JCPOA) on Iran's nuclear program, recognizing Jerusalem as the Israeli capital and moving the American embassy there from Tel Aviv, recognizing Israeli sovereignty over Syria's Golan Heights, and declaring the Iranian Revolutionary Guard Corps a "foreign terrorist organization." There is a strong belief that Netanyahu has such a hold on Trump, via the influence of individuals like Adelson, Kushner, Broidy, and others, that Trump will soon commute the prison sentence of convicted Israeli spy Jonathan Pollards and be among the first to recognize Israeli sovereignty over the West Bank.

Therefore, the close relationship between Broidy and the UAE, particularly its Crown Prince, Mohammed bin Zayed (MbZ) al Nahayan, has many Emiratis questioning the loyalty of MbZ and the Nahayan clan to the Palestinian cause. The aggressiveness of the Nahayan family toward Iran, with which the northern emirates have close commercial relations, and Qatar, which almost became a member of a wider federation of emirates after Britain's announcement that it was pulling out of the region in 1968. The federation between Bahrain, Qatar, and the seven Trucial States never materialized because of in-fighting between the prospective members. In December 1971, six of the seven Trucial States formed the UAE at a meeting in Dubai. The seventh, Ras al-Khaimah, was reluctant to join. However, in January 1972, Ras al-Khaimah acceded to the new union.

Iran, then ruled by the Shah, invaded three islands, Greater Tunb and Lesser Tunb, which were claimed by Ras al-Khaimah, and Abu Musa, claimed by Sharjah. The emir of Sharjah, Sheikh Khalid bin Mohammed Al Qasimi, negotiated a deal with Iran, whereby the Iranians leased Abu Musa for $3 million a year. Around the time of the agreement with Iran, Sheikh Khalid was killed while trying to put down a Nasserite coup by his cousin, Sheikh Saqr bin Sultan Al Qasimi, who was the emir of Sharjah, but was deposed by his family and exiled to Cairo in 1965. The mercenary force that Sheikh Saqr led to Sharjah was loyal to anti-UAE members of the Qasimi royal family, which ruled both Sharjah and Ras al-Khaimah. The plans by Sheikh Saqr to lead Sharjah out of the UAE and Ras al-Khaimah's initial reluctance to join the federation continue to influence inter-emirate relations in the UAE.

From the outset, the ruling families of the seven UAE states bickered over everything from territory to sharing financial resources. The Nahayan family used its influence to have Abu Dhabi declared the UAE capital and the Emir of Abu Dhabi, Sheikh Zayed bin Sultan Al Nahayan and his successors named as presidents of the UAE.

Although Dubai soon became the commercial and architectural gem of the Arabian Peninsula, Abu Dhabi and the Nahayan family continued to exercise strong political control over the UAE. Two deaths of two of the founders of the UAE, Sheikh Zayed bin Sultan Al Nahayan of Abu Dhabi in 2004 and Sheikh Maktoum bin Rashid Al Maktoum of Dubai in 2006, brought to power in Abu Dhabi Sheikh Zayed's son, Sheikh Khalifa bin Zayed Al Nahayan, and Sheikh Mohammed bin Rashid Al Maktoum in Dubai. Although Khalifa bin Zayed became the president of the UAE, Mohammed bin Rashid held the positions of vice president and prime minister of the federation. Suspicions remain about the sudden death of Sheikh Maktoum. He reportedly died of a sudden heart attack at the age of 62 while staying at the Palazzo Versace Hotel in Queensland, Australia. His brother, Sheikh Mohammed bin Rashid, succeeded him. But, in 2015, the second oldest son of the Dubai emir and nephew of the late Sheikh Maktoum, Sheikh Rashid bin Mohammed bin Rashid, died of a heart attack in Dubai at the age of 33.

Emir Rashid turned Dubai into a global city and major financial and transportation and shipping hub. However, he overextended himself financially by building the Burj Dubai, the world's tallest building. When Dubai's finances faltered, it was Abu Dhabi that bailed out Rashid and his building. In return, the building was named the Burj Khalifa, in honor of the UAE president and Emir of Abu Dhabi.

Rashid's relationship with Abu Dhabi's Crown Prince and UAE Minister of Defense Sheikh Mohammed bin Zayed (MbZ). However, MbZ's close ties to Saudi Arabia's impetuous Crown Prince, Mohammed bin Salman (MbS), and pro-Israelis close to the Trump administration like Broidy and Kushner has irritated Dubai's business community and the northern UAE states that have profited from commerce with Iran. MbS and MbZ have supported the Gulf Cooperation Council's (GCC) sanctions on Qatar, primarily because that nation refused to join the GCC and the United States in increasing diplomatic and economic pressure on Iran.

A split began to emerge among the seven emirs. The smaller and poorer emirates of the north Sharjah, Ajman, Ras-al Khaimah, and Umm al Qaiwain were envious of the power wielded by the rulers of Abu Dhabi and Dubai.

Another royal rivalry has broken out in Ras al-Khaimah. In 1974 Sheikh Saqr bin Moḥammed Al Qasimi appointed his oldest son, Sheikh Khalid bin Saqr Al Qasimi, as Crown Prince. In 2003, Saqr replaced Khalid as Crown Prince with another son, Sheikh Sheikh Saud bin Saqr Al Qasimi. Khalid was exiled to Muscat, Oman amid UAE tanks and troops being stationed at all of Ras al-Khaimah's sensitive facilities. Khalid, like his cousin, Sheikh Saqr bin Sultan Al Qasimi who launched the unsuccessful coup in Sharjah is a reformer and possibly not so keen on the autocrats in Abu Dhabi and Dubai calling all the shots in the UAE. It is known that Khalid opposed the US invasion of Iraq and even burnt an American flag in protest. In October 2010, when Ras al-Khaimah emir Saqr died and Crown Prince Saud acceded to the throne, Sheikh Khalid sent out a video on the Internet proclaiming himself as the rightful emir of Ras al-Khaimah.

In 2009, Sheikh Khalid hired the Washington, DC lobbying firm, SNS Global, to advance his cause. SNS Global's chief is Glenn Simpson, the former Wall Street Journal reporter who is also the co-founder of Fusion GPS, the private intelligence firm at the center of the controversies surrounding the 2016 US presidential election. It is known that Sheik Khalid attended Barack Obama's inauguration in 2009.

Related Topic(s): Arab; Arab League; Cooperation; Economic; Iran; Oman; UAE United Arab Emirates, Add Tags
Add to My Group(s)
Go To Commenting
The views expressed herein are the sole responsibility of the author and do not necessarily reflect those of this website or its editors.